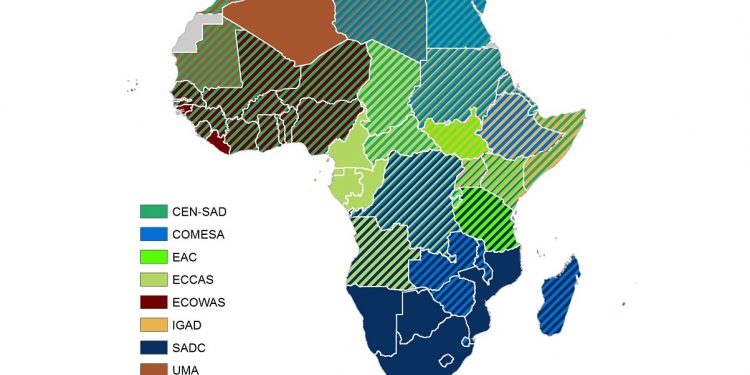 Africa's economic zones map. The AfCFTA could do more than the G20 can for the continent in the face of the covid-19 coronavirus pandemic. [Photo/Amsterdamcg]

The world economy expanded at its slowest pace since the global financial crisis in 2019 with annual growth decelerating in all geographic regions except Africa.

However, the prospects for Africa are dependent on how the world behaves in regards to trade barriers and wars which may cause a slowdown in 2020.

The economic situation in Africa remains challenging amid the slowdown in the global economy, lingering effects from the collapse in commodity prices and protracted fragilities in some large countries.

Situations are widely divergent across subregions, however. While economic conditions remain robust in East Africa and are improving in North Africa, growth in West, Central and Southern Africa remains inadequate to meet mounting development challenges.

GDP growth for the region as a whole is projected to increase moderately from 2.9 per cent in 2019 to 3.2 per cent in 2020 and is set to accelerate to 3.5 per cent in 2021, contingent on the implementation of effective reforms and subject to large downside risks.

Africa continues to face difficulties in achieving the more robust and sustained growth path that is needed to enhance living standards across the continent. GDP per capita growth is unlikely to reach much above 1 per cent in the near term.

A step change in the rate of economic growth is needed if the region hopes to make meaningful progress towards achieving the Sustainable Development Goals (SDGs).

In addition, the recent peace agreement signed by Djibouti, Eritrea, Ethiopia and Somalia after decades of hostilities is expected to unlock new investment, trade and business opportunities in the Horn of Africa. Growth is projected to remain stable at 6 per cent in 2020.

In Ethiopia, economic growth is forecast to exceed 7 per cent in 2020 and 2021, driven by rising private investment, robust public investment and growing business confidence as a result of economic reforms; nevertheless, it is essential that Ethiopia address macroeconomic fragilities, including low levels of foreign reserves and currency shortages, high levels of debt, and an elevated current account deficit.

The economic outlook in Kenya is moderately positive.

In the United Republic of Tanzania, growth is projected to decelerate slightly from 5.8 per cent in 2019 but to remain relatively high at 5.5 per cent in 2020. Economic activity is expected to be underpinned by robust domestic demand and investments in infrastructure, supported by foreign investments and an expansionary fiscal stance.

Domestic demand is also underpinning GDP growth in West Africa, where the rate of economic expansion is expected to remain steady at 3.5 per cent in 2019 and 3.6 per cent in 2020.

Robust growth in the member countries of the West African Economic and Monetary Union (WAEMU) is offset by sluggish economic activity in Nigeria.

Growth in Nigeria is estimated to have picked up to 2.1 per cent in 2019 as oil production trended upwards and private sector sentiment improved. In 2020, growth is projected to rise slightly to 2.3 per cent, but in per capita terms, the economy will continue to contract in the absence of major structural reforms.

The outlook in Ghana remains positive amid vigorous private consumption and buoyant government expenditure. GDP growth is projected to slow in 2020 but to proceed at a healthy pace of 6 per cent.

In Côte D’Ivoire, GDP growth is decelerating slightly after the expansion of 7.4 per cent in 2019 owing to lower external demand and the negative impact of volatile commodity prices on industrial production, but growth is expected to remain robust at 7.1 per cent in 2020.

Growth is also projected at about 6 per cent or more in Benin, Burkina Faso, Niger and Senegal.

The economic situation in Central Africa is challenging, as recovery from the collapse of oil prices in 2014/15 remains fragile amid security instability in some countries.

GDP growth stood at 1.6 per cent in 2018 and is projected at 2.7 per cent for 2019 and 2.9 per cent in 2020, supported by rising oil production in several economies. In terms of per capita growth, however, the subregion remains largely stagnant.

The economy of Cameroon expanded at a solid pace of 4.0 per cent in 2019, driven by higher gas production and continued growth in construction and services. Growth is projected to pick up to 4.2 per cent in 2020 due to rising exports as new projects in the gas sector progress.

Solid growth of about 4.6 per cent in 2019 and 4.8 per cent in 2020 is expected for the Central African Republic, reflecting improving security conditions, rising investment in infrastructure and better standards of policy management.

The pace of growth in Chad is projected to accelerate from 3.8 per cent in 2019 to 5.5 per cent in 2020, underpinned by rising oil production due to new oilfields coming on stream and more efficient extraction policies.

Meanwhile, the economy of Gabon is projected to expand by 2.5 per cent in 2019 and 2.8 per cent in 2020, reflecting rising oil production and emerging green shoots of non-oil growth.

The economic situation in Southern Africa deteriorated in 2019, with several economies stagnant or in recession amid weak investment, energy shortages, high unemployment and catastrophic weather. After an estimated expansion of only 0.3 per cent in 2019, GDP growth is projected at 0.9 per cent in 2020 before gradually recovering to 1.9 per cent in 2021.

In per capita terms, economic activity in the subregion will continue to contract until at least 2021.

In South Africa, growth is estimated at 0.5 per cent for 2019, remaining well below potential amid weak investment, energy shortages and high unemployment.

Prospects for a vigorous recovery are feeble, as the economy will likely continue to be negatively affected by policy uncertainties, weak business sentiment and limited fiscal policy space.

Consequently, GDP per capita growth is projected to remain in negative territory in 2020.

Meanwhile, the economic recession in Angola is expected to continue amid declining oil output and difficulties in attracting foreign investments. GDP growth is projected to enter positive territory only in 2021, though in per capita terms it will continue to contract for the seventh consecutive year.

The economy of Zimbabwe is experiencing a severe crisis amid foreign currency shortages, elevated public debt and uncontrolled inflation. One exception in the subregion is Malawi, which is projected to expand by more than 4 per cent in 2020 and 2021.

Economic activity will be underpinned by an improving business climate, better access to credit, and the rebuilding of infrastructure destroyed by Cyclone Idai.

The short-term risks across African subregions are tilted to the downside.

On the domestic front, agricultural output is highly exposed to weather-related shocks, with potential for dire economic and social consequences. In addition, political conflicts, social instability and security concerns are major downside risks across the continent and can affect the short-term outlook in many countries in the region.

There is also an elevated risk that difficult economic conditions in some countries in Southern Africa could become more entrenched, leading to more prolonged recessions in Angola, Namibia and Zimbabwe.

The upsurge in external sovereign bond issuances has also raised debt sustainability concerns in some countries, which could be exacerbated by external or domestic shocks, including slippages in fiscal management.

Can Africa contain the Wuhan Coronavirus?