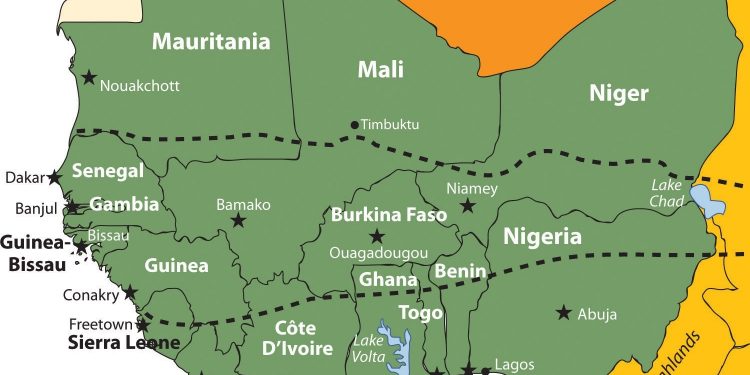 The West Africa region has 15 economies. The region will continue on tepid growth through 2020 according to projections by the African Development Bank (AfDB). [Photo/Lumen Learning]

by Njenga Hakeenah
in Countries, West Africa
0
Share on FacebookShare on LinkedIn

West Africa’s 15 economies will continue witnessing tepid growth through 2020 according to projections by the African Development Bank (AfDB).

These countries are diverse across many dimensions of development and in 2018, income per capita ranged from USD452 in Niger to USD3, 678 in Cabo Verde.

While growth in those countries has been driven by agriculture, the service sector has emerged to complement agriculture.

Between 2014 and 2017, West Africa’s GDP growth trailed the rate for Africa as a whole, though it was faster than in Central and Southern Africa.

The tepid growth reflected lower commodity prices, shrinking oil production in Nigeria and the impact of the Ebola virus outbreak.

Growth contraction in Nigeria which is by far the largest economy in the region, and on the continent, overwhelmed the high growth in some of the smaller economies, pulling down the region’s average.

GDP growth in 2018 was driven by positive net exports and investments while government consumption and household consumption contributed marginally.

Household consumption dominated GDP growth in 10 countries while investment was dominant in Nigeria and Sierra Leone.

Historically, higher prices for the region’s commodities have bolstered growth, so a sustained recovery in prices, conditioned on strong global demand, could improve growth and macroeconomic conditions in the short to medium term.

Among macroeconomic indicators, inflation, fuelled in part by expansionary fiscal policy and supply-side constraints, remains a challenge to investment and sustainable economic growth in West Africa.

Inflation rose sharply to 13 per cent in 2017, before declining to 9.5 per cent in 2018. It is projected to rise slightly in 2019 before levelling off, assuming sound management of monetary and fiscal policies and stable fuel and energy prices.

Inflation was low in members of the West African Economic and Monetary Union (WAEMU) at 0.9 per cent in 2017, but it was 11.0 per cent in non-WAEMU countries.

Between 2008 and 2018, all the currencies in the region depreciated in real terms.

After improving during 2014–16, the average fiscal deficit deteriorated in 2017.

The fiscal deficit has generally been above 3 per cent for most West African countries, the convergence criterion, because of weak domestic revenue mobilization and expansionary fiscal policies.

Efforts to diversify revenue sources have been hampered by the private sector’s limited capacity and by a reluctance to implement difficult tax reforms and end costly government subsidies.

For most countries, the bulk of tax revenue is collected from taxes on goods and services; international trade and transactions; and income, profit, and capital gains. Countries need to explore innovative means of raising revenue through reforms that enhance tax collection, minimize tax evasion, and curb illicit financial flows. Widening the tax base, including by bringing the informal sector into the tax net, could increase revenue.

The deficits in other countries ranged from 2.7 per cent in Côte d’Ivoire to 22.4 per cent in Liberia.

Major risks for the region’s economic prospects in 2019–20 include fragile security conditions in Mali, Niger, and northern Nigeria.

The ratio of external debt to GDP is trending upward for many West African countries with the average ratio increasing from 13.5 per cent in 2013 to an estimated 23.7 per cent in 2018.

Debt service payments have also increased since 2010 and are projected to remain high in the medium term.

The region’s ratio of debt service to revenue is projected to decrease to 16 per cent in the medium-term.

The decrease is based on ongoing reform efforts to improve domestic resource mobilization, as well as instituting new debt management initiatives.

But unemployment data are deceptive because they mask high informal employment and underemployment.

The data also do not reflect the long-term structural effects of informality on job creation and of high population growth.

Unemployment reflects the economic structure and population dynamics in individual countries, many of which are dominated by the largely informal agricultural and service sectors.

Two-thirds of the shift was captured by the service sector, whose productivity does not seem to be much higher than agriculture.

Despite the immense potential for regional value chain development, West African exports tend to be biased toward advanced economies, with more than 70 per cent of goods for further export directed to Europe and North America.

Smaller economies appear to be more globally integrated than larger ones.

Lower integration into global value chains may reflect the high prevalence and perverse effect of informal trade, which may lead to a substantial underestimate of the volume of trade.

These factors reduce the competitiveness of local West African products, while weak institutional and physical infrastructure also drive up costs.

Several challenges must be addressed to strengthen regional integration and engender structural transformation that enhances growth, creates jobs, and tackles poverty and other social ills in West Africa.

The first challenge is to increase the share of intraregional exports in total exports, which should enhance structural transformation.

The second challenge is to expand structural transformation beyond the service sector to the manufacturing sector.

The third challenge is to strengthen the primary links between regional integration and structural transformation by developing a dynamic industrial base with manufactured exports.

Policymakers need to focus on building productive capacities, particularly for goods and services for which trade complementarity can be enhanced over the short to medium term.

National and regional policies must be consistent, and protectionist measures must be avoided, as they are a disincentive to competitive regional trade and help to perpetuate informal trade.

While services may become an engine of growth in Africa, manufacturing remains an important anchor for transformation and industrialization in West Africa. Regional industrial clusters or economic zones, supported by properly designed and interlinked transport and power networks, could trigger transformation.

Nigeria, as the largest economy in Africa, should accelerate its consultations with key stakeholders to guide its membership in the CFTA.

The CFTA is fully consistent with the founding principles of ECOWAS; without ECOWAS’s leadership, regional integration in West Africa and at the continental level will not fulfil its promise.

You can also read about the death, destruction and cost of Cyclone Idai in Mozambique, Russia’s RZD, Afreximbank eyeing railway construction in Africa and China going off the rails in connecting Africa.