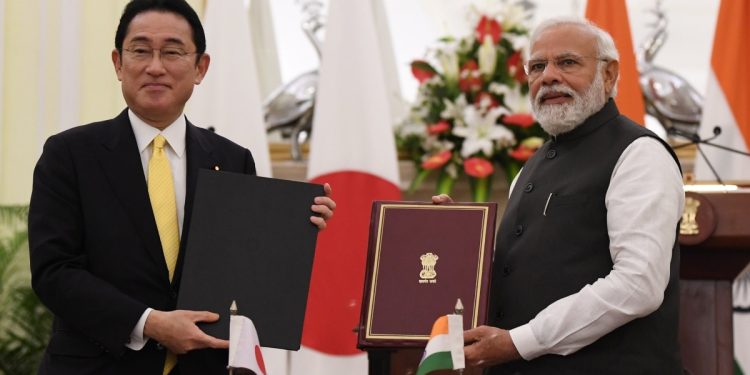 Japan will invest $42 billion in India over the next five years to boost trade and cooperation between the two Asian nations.

Japan’s Prime Minister Fumio Kishida said the investment would be spread across several industries, including green energy and urban infrastructure.

He announced the investment deal during his first state visit to India since taking up office.

The two countries also committed to strengthening securities ties across the Indo-Pacific region during the visit.

They also discussed the ongoing crisis in Ukraine.

“The Russian attack is a serious matter as it has shaken international norms,” ABC News quoted Kishida.

On its part, India affirmed the importance of its ties with Japan, and the wider Quad, which comprises the United States and Australia.

According to the news portal, India is the only country in the Quad that is yet to condemn Russia’s decision to invade Ukraine publicly.

“India is the only Quad member that has not condemned Russia’s invasion of Ukraine. It has refrained from taking sides and abstained from voting against Russia at the U.N. or criticising President Vladimir Putin,” the news portal noted.

Available data indicates that Japan’s investments in India have reached $32 billion in the last 20 years.

In the 2019-2020 financial year, bilateral trade between the two countries crossed the $11.87 billion mark.

According to Business Standard, Japan is the third-largest investor in the Indian economy. Japan contributed 7.2% to India’s total FDI inflows between 2000 and 2019.

The news portal further indicates that Japan, through the Japan International Cooperation Agency (JICA), is involved in at least 27 recent and ongoing activities in India. They range between health and medical care, transportation, power and energy, urban environment management, and agricultural and rural development.

JICA also recently hinted that it expects to fund $3 billion worth of projects in India between 2022-23.

The agency also finances big infrastructure projects such as the Mumbai-Ahmadabad High-Speed Rail and the Mumbai Trans Harbour Link.

In a related story, The Exchange Africa recently reported that India and Sri Lanka had finalised a US$1 billion line of credit on Thursday, March 17, 2022.

According to Hindustan Times, the funds by India would help Sri Lanka cope with the ongoing economic crisis, which is the worst that the island nation has faced in decades.

Sri Lanka will use the funding to acquire essentials such as food and medicine.

During the meeting, Modi said India would “continue to stand with the friendly people of Sri Lanka”, the news portal quoted the external affairs ministry.

According to the publication, the two leaders discussed various issues: renewable energy, agriculture, tourism, and fisheries.

In their plan, they also discussed digitisation and fisheries.

For instance, on fisheries, the leaders admitted the sector was complex, adding that it had multidimensional aspects.

These include humane treatment of fishermen and their livelihood and ocean ecology, among other issues.

At the same time, the leaders discussed Sri Lanka’s latest interest in organic agriculture. Under the sector, the Indian prime minister outlined the advantages of natural farming and the country’s experience in developing methods that include nano-fertilisers.

Rajapaksa’s trip is the second he has made to India since December 2021.

Over the past few months, India has provided Sri Lanka with loans amounting to US$500 million to purchase fuel and a currency swap of US$400 million under the Saarch facility.