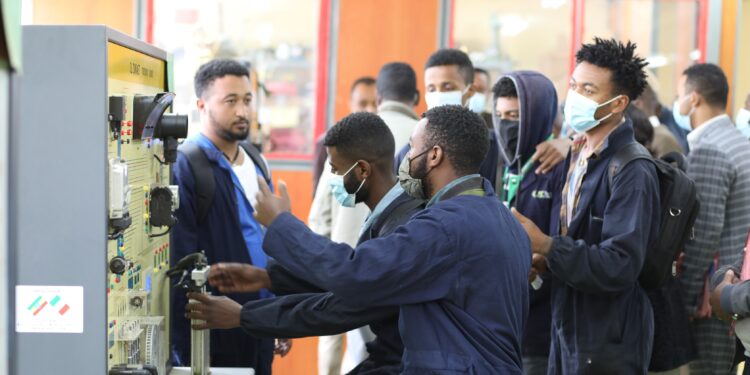 IUCEA had developed a new 2021-2026 strategic plan to harmonize TVET qualifications in the East African Community to facilitate regional mobility of students, staff and labour upon graduation.

Student enrolment in Technical and Vocational Education and Training (TVET) colleges in East Africa has quadrupled from the baseline data.

The report was carried out to evaluate the project’s performance in its mid-term. It revealed that the total students enrolled in the sixteen Regional Flagship TVET Institutes (RFTIs) increased from 6,971 students at baseline to 30,776 students at mid-term.

The project has surpassed its initial target to enroll 20,000 students annually in both long-term and short-term training programs.

According to the World Bank Enterprise Survey of 2015, over 25 percent of firms surveyed in sub-Saharan Africa reported an inadequately educated workforce as a significant hindrance. The firms rated over 25 percent of all production workers evaluated as unskilled.

World Bank spotted a shortage of specialized technical and vocational education and training (TVET) skills in the sectors of transport, manufacturing, energy, ICT and agro-processing, a gap that could slow the industrialization agenda in Africa.

In collaboration with the governments of Kenya, Ethiopia, and Tanzania, World Bank-funded EASTRIP to increase and improve access to TVET programs. 16 selected Regional Flagship TVET Institutes offer the project to support regional integration.

TVETs can be a powerful engine to drive economic restructuring and transformation in Sub-Saharan Africa, as in the Republic of Korea, Singapore, China, and other countries where TVETs have channelled technology transfer and skills to workers.

The number of graduates employed within six months has increased from 47 per cent to 69 per cent.

“We are advocating for our member universities to move from academic-based learning that has characterized university education for decades to 21st-century competency-based learning that emphasizes skills development for the world of work.” Said the Executive Secretary of IUCEA, Professor Gaspard Banyankimbona.

Prof. Gaspard said TVET institutions had a crucial role in giving East Africans the necessary learning experiences and required skills to meet the demands of the fast-changing employment landscape.

He added that IUCEA had developed a new 2021-2026 strategic plan to harmonize TVET qualifications in the East African Community to facilitate regional mobility of students, staff and labour upon graduation.

“Over the last three years, significant progress has been made in expanding enrolment and developing demand-driven programmes in most TVET institutes.” Said World Bank’s Lead Education Specialist, Dr Xiaoyan Liang. “The underlying principles of industry linkage and institutional autonomy are two important pillars that EASTRIP use to improve the relevance and quality of TVET, and these are being well recognized.”

Here is the list of sixteen TVET Institutes supported by EASTRIP, grouped by area of focus and the country they are situated; 7 in Ethiopia, 5 in Kenya and 4 in Tanzania.

TVET institutes under Transport and Infrastructure.

TVET institutes under Power and Energy