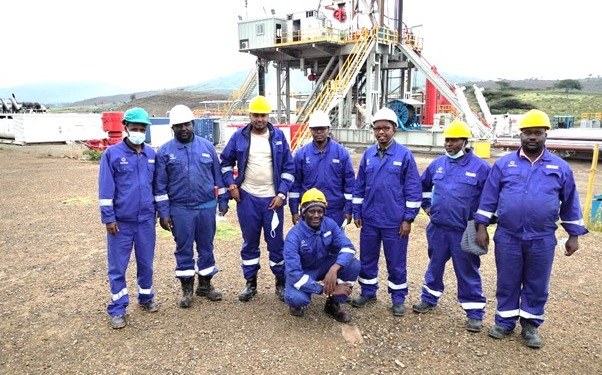 In February 2019, KenGen won a contract to offer geothermal drilling services for EEP in the Aluto-Langano geothermal fields in Ethiopia.

by Wanjiku Njugunah
in Energy
0
Share on FacebookShare on LinkedIn
Kenya Electricity Generating Company PLC (KenGen) has completed drilling the deepest geothermal well in Ethiopia reaching a depth of 3,000 meters, surpassing a target of 2,750 meters.
This marks the second of eight geothermal wells KenGen has been contracted to drill for the state-owned electricity producer, Ethiopia Electric Power Company which was delivered successfully amid the COVID-19 pandemic.
“We are happy to see our teams deliver the same level of success in the Horn of Africa as we do back home in Olkaria where we have also drilled several geothermal wells to depths of 3,000 meters,” said Ag. Geothermal Development Director, Peketsa Mangi.
The KenGen team is optimistic that the project which is part of the company’s diversification strategy once completed will help catalyze economic development in the horn of Africa through provision of renewable energy while at the same time increasing access to electricity.
According to KenGen’s Finance and ICT Director, Dr. John Mudany, the NSE-listed firm has seen significant growth in its revenues attributed to income from the projects in Ethiopia.
In February 2019, KenGen won a contract to offer geothermal drilling services for EEP in the Aluto-Langano geothermal fields in Ethiopia.
At the same time, also in the Horn of Africa, under a contract signed in October 2019, KenGen has completed drilling two geothermal wells for Tulu Moye Geothermal Operations PLC (TMGO) in Ethiopia and is currently drilling the third well.
These two projects are hinged on the Company’s diversification strategy which has led to the organization’s expansion in the Horn of Africa. Besides Ethiopia, KenGen has also secured a Ksh.709 million project to offer commercial drilling services in Djibouti.
In February this year, the company signed a contract with Office Djiboutien De Development De lenergie Geothermique (Djiboutian Office of Geothermal Energy Development) (ODDEG). KenGen is also prospecting for similar partnerships locally and other countries in the region.
The Federal Democratic Republic of Ethiopia has declared a six-month state of emergency in the Horn of African country but the situation on the ground is calm and KenGen hopes normalcy will resume soon.
KenGen targets more revenue with new 100% owned subsidiary
“We are assessing the full extent of this latest security situation and working with both the Kenyan and Ethiopian Foreign Affairs and Security authorities for purposes of monitoring the situation to ensure the continual safety of our people,” said Dr. Mudany.
Performance
The milestone comes at a time when the firm has reported a 7% Profit Before Tax increase from Ksh.13.79 billion to Ksh.14.76 billion.

The company’s Managing Director and CEO, Rebecca Miano said the profit growth was achieved on the back of continued revenue growth underpinned by the company’s diversification strategy.

Miano said, “In spite of the challenging times, KenGen remained strong recording a steady performance and demonstrating sound financial position which reaffirms the company’s promise and commitment to continual business growth and maximization of shareholder value.”

“Revenue increased by 4.06% from Ksh.44.110 billion in 2020 to Ksh.45.901 billion. This was mainly attributed to revenues from geothermal, hydro generation and the diversification venture at Tulu Moye in Ethiopia. The ongoing geothermal drilling services in Tulu Moye contributed Ksh.1.784 billion compared to Ksh.440 million in the previous year,” said the KenGen MD and CEO.

Overall, there was a growth of 3% in unit sales from 8,237GWh in 2020 to 8,443GWh in 2021. The Company benefited from a full year operation of the 172MW Olkaria V geothermal power plant whose construction was completed in October 2019, resulting in a 12% displacement of thermal generation.

“In the year 2021, we were blessed with favourable hydrology. In line with KenGen’s affordability agenda to lower the cost of electricity to the consumers, we prudently prioritised dispatch of competitively priced hydro generation,” Miano added.

In the year ahead, KenGen aims to deliver Olkaria I Unit 6 geothermal power plant, which will add 83MW to the national grid by end of December 2021. At the same time, the company aims to progress the milestones towards the commencement of the 140MW Olkaria VI geothermal power plant through a Public Private Partnership.

Miano thanked the Government of Kenya, the close to 200,000 shareholders, KenGen employees, development partners and other stakeholders whose contributions she said enabled the Company to achieve its mandate and record steady business performance.