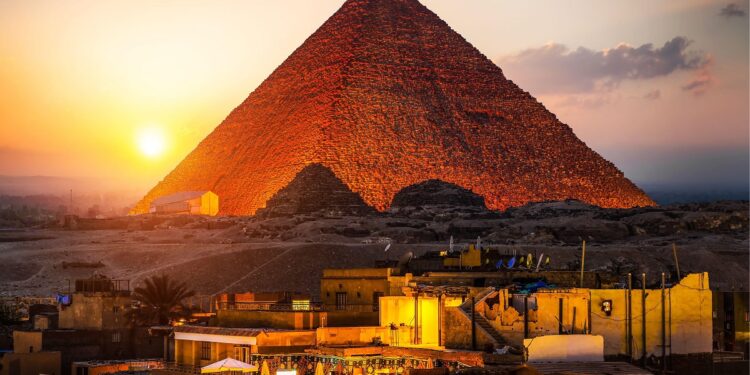 Egypt is famed for its pyramids which have attracted millions of visitors every year. However, this is likely to change as the nation shifts to agriculture in earnest to improve the lives and livelihoods of its citizens.

by Joseph Kangethe
in Agribusiness, Egypt
0
Share on FacebookShare on LinkedIn

Egypt is famed for its pyramids which have attracted millions of visitors every year. However, this is likely to change as the nation shifts to agriculture in earnest to improve the lives and livelihoods of its citizens. Agriculture is a crucial driver of Egypt’s economy, contributing 11.3 per cent of the GDP.

President Abdel Fattah Al-Sisi has invested heavily in the sector to protect food security in a nation where 96 per cent of the land is dry. President Al-Sisi’s administration is working towards reducing food imports, and their efforts are proving to be successful.

According to the World Bank, Egypt has risen to the wealthiest country in Africa, measured by GDP, which stands at US$1.38 trillion. The country has a population of 102.3 million. At the time of President Fattah’s swearing-in, Egypt was not among Africa’s top 10 wealthiest nations.

The drivers of Egypt’s economy have been gas extractives, agriculture, tourism, manufacturing, media, construction, petroleum imports, and ICT sectors. Egypt has made significant steps in the agricultural sector, and one of the successes has been the Haya Karima project.

One of the most creative and diverse projects in The National Project for Developing the Egyptian Countryside is the Haya Karima project. Haya Karima, which means Decent Life, is a national endeavour to develop the Egyptian countryside that has driven change in important sectors in the country.

The National Project for Developing the Egyptian Countryside is an initiative estimated to cost US$1.11 trillion. This project will impact at least 1,350,366 households. President Abdel Fattah al-Sisi said in January 2021 that the project would be completed in three years. US$519.28 million of the total funding will come from the International Fund for Agricultural Development (IFAD).

The government that took power in 2014 inaugurated a series of projects to reignite Egypt’s economy. As a result, Egypt’s planning minister, Hala al-Saeed, expects the country’s economy to grow to 5.6 per cent in the FY2021-22.

Prime Minister, Mostafa Madbouly, referred to Haya Karima as an “icon” project that will help Egypt rebuild its economy and better the lives of more than half the population in Egypt.

The initiative has launched a critical project to produce natural gas and fertilisers for land and livestock farmers.

The biogas project facilitators are the Good Life Foundation, the Renewable Energy Foundation and the International Cooperation Fund to produce natural gas and organic fertiliser from livestock waste.

Nearly twenty units are currently operational in the Sunbat village, one of the villages developed under the umbrella of the Haya Karima project.

The project eradicates chemicals as fertilisers in the farm, promoting good health to the consumers. Doaa Salama, the brains behind the project’s construction, said that the project produces at least three gas cylinders of fertilisers per month, serving approximately three acres of agricultural land.

For the longest time, the sustainability of agricultural production in Egypt has been tagged to reclaiming land in Egypt, and President Al-Sisi has launched initiatives driven towards the same.

The Egyptian government has been beefing up mega projects to reclaim drylands. Upon completion, the nationwide projects will reclaim 12,504 square kilometres (3 million feddans – a unit of area used in Egypt), which is about one-third of the area under cultivation in the country.

Saad added that Egypt was sufficient in producing vegetables, rice, maize, fruits, poultry, and fish, medical and aromatic plants. They, however, lacked in the production of sugar, wheat, oil and beef.

The biggest challenge in reclaiming land in Egypt has been water availability. Completing the mega projects would demand 80 billion cubic metres of water, which overruns the water resources available for irrigation, which stands at 60 billion cubic meters.

Land reclamation is one of the pillars in ensuring food security in Egypt, and wastewater treatment will help ensure the reclaimed land’s survival.

In December last year, Egypt started the construction of the world’s largest wastewater treatment plant. The US$1.14 billion Bahr El Baqar project is located on the eastern side of the Suez Canal and will produce two billion cubic metres of water annually.

The project will help the government to reclaim 400,000 feddans (1,668 square kilometres). Treatment of wastewater will also reduce pollution by a substantial margin.

The government is currently establishing another US$5 billion water treatment plant in the north-western part of the country that will produce six billion cubic metres of water. The treated water will irrigate reclaimed land in the New Delta region. The project will create five million jobs, and the Ministry will grow strategic crops, including wheat, corn and vegetables.

“Plans of agricultural expansion are the strategic solution to compensate for the land Egypt has lost in the Nile Valley and Delta,” said Shaker Arafat, chairman of state-run Food Technology Research Institute.

Egypt has lost over 400,000 acres of agricultural land in 40 years in the fertile lands of the Nile Valley and Delta due to urbanisation.

The treated water is being distributed to areas without water through the canal lining projects, encouraging farmers to use flood irrigation over modern irrigation methods to save on water loss.

Canal lining is among 14 projects in Egypt’s National Development strategy. The lining project is estimated to save five million cubic meters in seepage losses.

The Ministry is campaigning for farmers to use flood irrigation for modern irrigation systems to ration water use. Modern irrigation currently serves roughly 236,900 acres. However, agricultural owners are requesting additional 56,650-acre coverage.

The Minister of Irrigation and Water Resources Muhammad Ati said on January 15 that the country had completed lining 3,913 kilometres of irrigation canals. The Ministry was lining an additional 4,087 kilometres and had set funds aside for a further 2,783 kilometres bringing the total length covered by the project to 10,682 kilometres. The lining of canals will facilitate water distribution and management and reduce water pollution.

Egypt is also becoming a big fish in poultry production in Africa and is currently exporting hatched eggs to Jordan and the UAE. Poultry farming, however, is posing a severe health threat due to poor disposal mechanisms of the dead “birds”.

The government of Egypt has been prioritising poultry farming as one of the critical pillars to propel food security. The Minister of Agriculture, El- Sayed el-Quseir, noted that the industry employs three million people.

President Al-Sisi’s administration has invested over US$6 billion in poultry farming.

Improper disposal of dead poultry could transmit pathogenic diseases. The FAO research shows that broiler farmers in Egypt dump more than 29 million dead chickens into the Nile River and other waterways, posing a significant threat to the water used for drinking and irrigation.

Existing agricultural and waste management laws restrict dumping, but they are poorly enforced. Proper disposal for dead birds should be based on two critical pillars in the poultry farming sector;

The business models that the poultry farmers use to breed and sell their products to the market.

The capacity of the public sector to commit to proper disposal. Composting dead poultry is one of the most viable solutions.

Composting dead poultry will have several advantages to the millions of households and the 21,000 licensed broiler farms in the country:

There will be a substantial reduction in microbial threats from dead animals, which will increase the health of livestock.

The health of livestock will raise the livelihoods of farmers.

Composting will increase the supply of fertiliser for agriculture, reducing their prices in the market.

The FAO has signed an MoU with the Poultry Farmers Union, where the FAO will provide advanced and innovative technology services to strengthen the production of biosafety and biotechnology. The organisation will also provide training and technical support for workers in the poultry sector.

Egypt announced the inauguration of hatched eggs exports to the UAE and will provide 126,000 poultry chicken hatching eggs. The head of the livestock and poultry development sector noted that chicken production exceeds the country’s needs, standing at about 1.4 billion annually, adding that this provides room for product exportation. Egypt is also exporting 95,000 hatched eggs to Jordan.

The agricultural sector’s future in Egypt looks very promising under President Abdel Fattah Al-Sisi who believes the sector can be self-sustainable.