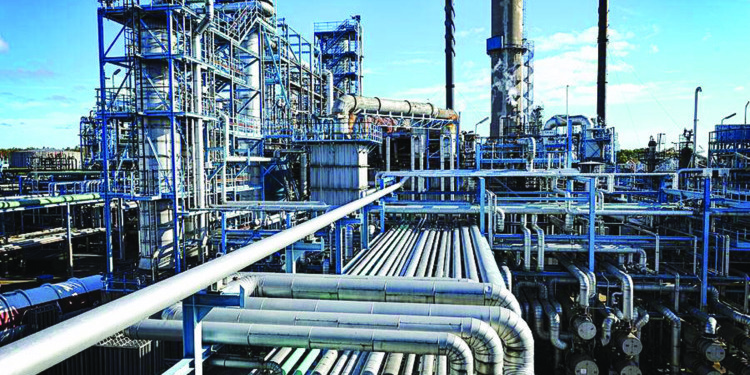 by Francis Mwema
in Business, Industry and Trade
0
Share on FacebookShare on LinkedIn

The Major Oil Marketers Association of Nigeria (MOMAN) has indicated interest in lifting refined petroleum products from the soon to be completed $15 billion Dangote Refinery, in Lagos.

In a statement notice issued by the Dangote Group on Sunday July 3, noted that the Major Oil Marketers made this request during a recent visit to the site of the 650,000 barrels per day single train refinery in Ibeju-Lekki Lagos, according to the News Agency of Nigeria (NAN).

Speaking after the conclusion of his visit to the site, the Chairman of MOMAN, Mr Adetunji Oyebanji, said the refinery would play an important role in helping to remove the various bottlenecks associated with the importation of petroleum products into the country.

Oyebanji, who is also the Managing Director 11 Plc (former Mobil Plc), said the marketers were waiting eagerly for the completion of the refinery, which was expected to make Nigeria self-sufficient in petroleum refining.

He said: “It is our desire to see our members buy refined products from Dangote Refinery when it comes on stream. We are open to discuss commercial terms with the management of Dangote Oil Refinery regarding the lifting of refined products.

According to the Chairman of MOMAN, Adetunji Oyebanji the Dangote refinery will have a big impact and influence on the market chain whereby major shifts in the market are expected to be witnessed and delayment of the product reduced. He also adds also adds that the turn-around time was going to be much faster and more efficient.

“Getting products from Dangote Refinery will also give us the possibility of getting the product by vessels or by trucking.” He said.

Oyebanji hopes that Dangote Refinery will fix enough margins for members of MOMAN to allow them rehabilitate and upgrade the oil assets adding that the refinery would move Nigeria from an import-dependent nation to self-sufficiency in petroleum products.

The Completion of Dangote Refinery will be a big development and a game changer to the Nigerians as the country [Nigeria] will move from import-dependent in petroleum product to becoming totally self-sufficient. It will also move Nigeria from a situation whereby all the products that it consumed will be available locally.

While urging the Federal Government to encourage more investors who have gotten licenses to establish private refineries in the country, Oyebanji is hopeful that the take-off of Dangote Refinery would facilitate the deregulation of the downstream oil sector.

He said, “If you have a policy that allows you issue significant numbers of licenses and only a few are utilized, this tells you that there is a problem somewhere, which requires government’s attention.“Government needs to have a discussion with the licenses to find out their challenges and how it can be of assistance to them.’’

On his part, the Chief Operations Officer, Dangote Oil Refining Company, Mr Giuseppe Surace, told the marketers that the refinery was designed to process a variety of light and medium grades of crude, including petrol and diesel as well as jet fuel and polypropylene.

In a related development, it can be recalled that while explaining the reason why the Federal Government wants to purchase 20% stake in Dangote Refinery, the Group Managing Director of the Nigerian National Petroleum Corporation (NNPC), Mele Kyari, said that the take-off of the refinery will make Nigeria the hub of petroleum products and supplies.

He also said that it is going to change the dynamics of petroleum supply globally in the sense that the petroleum products flowing from Europe today will be reversed to some other direction as Nigeria will be the supplier for West Africa legitimately and also many other parts of the world.