The world has been involved in discussions about the adoption of the so-called ESG principles.

Sentiment across Africa and the world is now towards Environment Social Governance and shared values.

The world has been involved in discussions about the adoption of the so-called ESG principles and with the onset of the pandemic, the need to adopt these has become more urgent.

To demonstrate how urgent this matter is nine of the 10 largest economies in the world have committed to net zero emissions by 2050. The United States is in the process—if it has not already done so—of passing legislation called the CLEAN Future Act which according to the House Committee on Energy & Commerce, “directs all federal agencies to use all existing authorities to put the country on a path toward a 50 per cent reduction in greenhouse gas pollution from 2005 levels by no later than 2030, and to net zero no later than 2050.”

In summary all stakeholders namely customers, employees, communities, governments and suppliers now expect corporations to create value that is sustainable. This development is seen as an opportunity for corporations in general to take the lead in the transition to a low carbon global economy and forge a new way for long term value creation.

All businesses are involved in varying degrees with what is now commonly known as environment, social and governance concerns. These criteria [ESG] are a set of standards for a company’s operations that socially conscious investors use to screen potential investments. As suggested by the name they involve three issues.

Firstly, environmental criteria which consider how well a company performs as a steward of nature. This includes the energy a company takes in and the waste that it produces and the consequences for humanity as a result. This aspect of the criteria also encompasses carbon emissions and climate change which have become highly topical especially in the ongoing COP26 conference in Glasgow. This aspect of the ESG criteria is important because every company uses energy and it is affected by the environment. The social criteria which is second considers how that company manages its relationships with stakeholders namely employees, shareholders, lenders, customers, suppliers, and the communities where it operates. This feature addresses the relationships a company has and the reputation it fosters in the communities it operates in which may include labour relations, diversity, and inclusion. Lastly the governance aspect deals with the company’s leadership, executive pay, audits, internal controls, and shareholder rights. These address how a company governs itself, makes effective decisions, complies with the law and meets the needs of external stakeholders because every company requires governing being itself a legal creation.

ESG has become a popular way which prospective investors appraise companies they desire to invest in especially since investors particularly the younger ones now wish to invest in companies that demonstrate a certain propensity to uphold moral values. In the United States some investment companies and mutual funds have begun to offer exchange traded funds (ETFs) and other products that follow ESG criteria.

It used to be in times past that ESG and corporate social responsibility (CSR) and more recently, creation of shared value (CSV) were viewed by many companies as box-ticking exercises – the same way that black economic empowerment initiatives were viewed in South Africa approximately 15 years ago. Nowadays companies that commit themselves continuously to upholding ESG principles are seeing actual tangible financial benefits from their commitment. If a company desires to be appealing in the investment community then it needs to rethink the way it views ESG. ESG-oriented investing has experienced a meteoric rise; it is now reportedly worth more than US$30 trillion according to McKinsey & Co.

The consulting company says of the growth of global sustainable investing, “The acceleration has been driven by heightened social, governmental, and consumer attention on the broader impact of corporations, as well as by the investors and executives who realize that a strong ESG proposition can safeguard a company’s long-term success. The magnitude of investment flow suggests that ESG is much more than a fad or a feel-good exercise.”

Companies that pursue and uphold the tenets of ESG do not experience a drag on value creation. The opposite has been found by research to be true. Having a strong ESG proposition has been shown to have a strong correlation with high returns on equity. 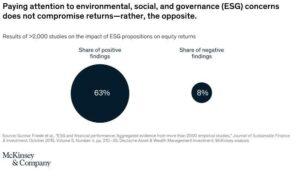 PricewaterhouseCoopers published a report earlier titled PwC Mine Report 2021 this year wherein they came up with three reasons why global mining companies specifically and corporations in general, should have ESG as a strategic imperative for growth. These reasons are increased shareholder value, product and operations differentiation, and improved access to capital. This view taken by PwC is congruent with assertions made by McKinsey and other global thought-leaders about ESG. There is inherent value to be appropriated when companies choose to be more responsible about the environment, the society they are part of and how they are governed.

PwC’s Mine Report asserts that companies with high ESG ratings outperformed the broader market during the peak of the COVID 19 crisis. These companies are also said to demonstrate stronger performance in the long term. The report also found that companies with outstanding ESG ratings delivered 34 per cent average shareholder returns over the past three years which is 10 per cent higher than the general market index according to an analysis conducted by investment research firm MSCI. 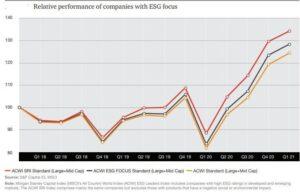 Companies are starting to incorporate low carbon inputs into their products and services, and these have been found to attract premiums from their clients. For example, in the mining sector the premium for low carbon aluminum has increased from US$15 to US$59 because of increasing demand for the product in Europe. Alcoa and Rio Tinto sold the first batch of the low carbon metal to Apple through their joint venture called Elysis. The joint venture uses a revolutionary method to process aluminum that generates oxygen and replaces greenhouse gas emissions from the traditional smelting process. This is one of the many examples of companies making money from methods that are environmentally friendly.

In another example a mining company called Teck Resources provided land and infrastructure for a solar power facility on its former mine site in British Columbia. In part, this is an element of Teck’s strategy to develop post-mining land uses. But it is also an aspect of the company’s efforts to act on climate change with a goal for a substantial portion (81 per cent) of its total electricity consumption eventually coming from renewable energy sources. The success of this endeavor means that the mining company can substitute a considerable part of its utility bill.

Companies that embed ESG into their strategy and make full disclosures about sustainability and governance can access capital funding at generous rates. This is because of new developments and innovations in the financial markets that increasingly favour borrowers and issuers that are ESG compliant. New sustainability-linked loan facilities are available that provide incentives for ESG performance, such as progress on green investments or sustainability initiatives, through a cheaper cost of capital. Take, for example, Newmont’s recently announced US$3 billion sustainability-linked revolving credit facility, which includes a pricing feature based on third-party sustainability measures. The better the company does on ESG, the lower the cost of capital.

Going forward ESG will drive investment capital with specialized funds in this area outdrawing the more traditional funds that do not have ESG focus. To this end Bloomberg Intelligence reported that these funds recorded net inflows of US$89 billion in 2020 which it said was three times the figure achieved in the previous year. ESG embedded companies will find it easier to raise capital on the markets.

For all its merits ESG is not a magic wand or secret formula to solve the world’s problems. The ESG model lacks substantive measures with which each criterion can be scored for any given company. There isn’t a commonly or universally agreed definition of good ESG performance. These are some of the challenges that the conference held by Standard Bank on Climate Change highlighted last month. Without a universally agreed standard on good ESG performance the business world will fly blind extolling the virtues of ESG but not being able to tell exactly what that good performance looks like.

Be that as it may ESG is not something to do once and then forget. It needs to be entrenched into the core of organizational strategy and purpose. Corporations and businesses must set targets regularly, report progress transparently and refine their approach continually. Miners need to demonstrate that they not only understand the risks and opportunities of ESG but are committed to addressing them in everything they do.

Stakeholders are the other key to strong ESG performance. Business needs to identify who their ESG stakeholders are and what their concerns are, and then proactively engage with them. Local communities are crucial, but so are regulators, investors, analysts, suppliers, customers, and employees. Without understanding the non-financial drivers of all their stakeholders, corporations will find it hard to access new opportunities, and affordable capital to develop these resources and workforces to operate their businesses.