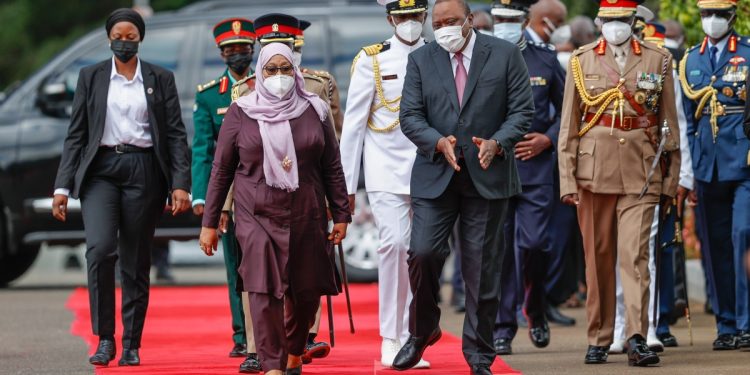 The improved relationship between Kenya and Tanzania seems to be bearing fruits if the Kenya National Bureau of Statistics (KNBS) data is anything to go by.

In its Economic Survey 2022, the statistics office indicates that Tanzania’s exports to Kenya doubled in just ten months, the highest figure recorded since independence.

The survey attributed the rise to increased imports of maize and rice from Tanzania.

Kenya imported more goods from Tanzania in 2021 than before, despite the COVID-19 pandemic affecting trade in the region and globally.

The survey revealed that Kenya opened its market to receive agricultural products from Tanzania amid the pandemic that affected its stock.

The survey also found that Kenya’s exports to Tanzania and the Democratic Republic of Congo showed a significant rise, jumping from $276.5 million and $124.3 million in 2020 to $396.5 million and $212.2 million. The bureau attributed the increase to the export of cut flowers, tea, and coffee to DRC and soap to Tanzania.

Overall, Uganda remained the highest export market for Kenyan goods in 2021, despite trade disputes between Nairobi and Kampala.

According to the survey, the value of exports to Uganda rose from $627.8 million in 2020 to $797.4 million in 2021. KNBS said the growth was on the back of a rise in domestic exports of goods, including cement clinkers, palm oil, and flat-rolled iron products.

Other exports included non-alloy steel and re-exports of machines and tools for drilling, boring sinking, milling, threading or taping.

KNBS recorded a decline in exports to South Sudan, which dropped by 26 per cent to $148.7 million. The bureau said that led to a decline in domestic exports of food supplements and re-export of dried leguminous vegetables.

The improved trade relations come a year after Kenya and Tanzania agreed to eliminate barriers.

In March 2021, the two countries said several barriers were hindering the smooth flow of trade and people and agreed to form better relations.

As reported by The Exchange Africa, at the time, President Uhuru Kenyatta and Tanzania Head of State Samia Suluhu Hassan announced new measures to facilitate trade.

Among them was establishing a joint team of experts to address the disjointed enforcement of cross-border Covid-19 containment protocols, one of the most pronounced non-tariff trade barriers between the two nations.

“Just as His Excellency the President has said, we have agreed that our Health Ministers need to sit down and come up with a structured system of testing our people at the border points to allow easy movement of our people to do their businesses,” President Samia Suluhu told the media at State House, Nairobi.

The two leaders noted that Kenya and Tanzania needed to develop modalities for mutual recognition of COVID-19 test results, noting that the lack of harmonised protocols has hampered the free flow of goods and people.

“First, we noted that trade between Kenya and Tanzania is facing some administrative challenges. They include non-tariff barriers and other restrictions which are frustrating trade and investment between our two countries,” President Kenyatta said.

Other goods included animal or vegetable fats and oils, wheat gluten, Sugars & confectionery, Plastics, and Soap among other products.

Commenting on the status of trade, President of FEC-Goma Bercky Chirimwami said they were eager to build the capacity of DRC business people to enable trade under the EAC Common Market.

He also urged businesspeople in DRC to look for opportunities in cross-border trade and investments.