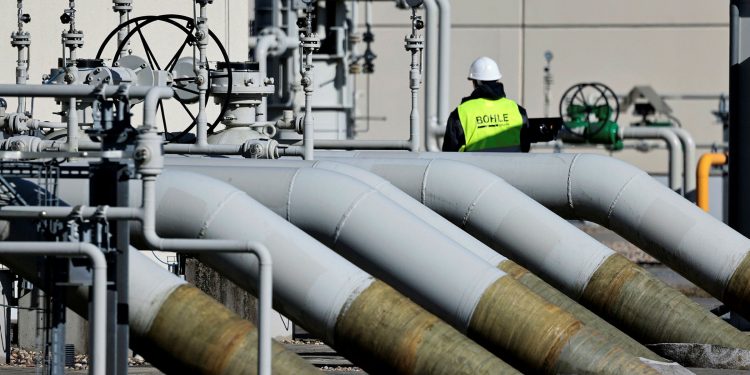 Although Germany is one of Europe’s most populous countries, its oil and gas output barely meets 5% of yearly consumption, leaving it heavily reliant on imports from Europe and Russia.

Consumers have had to bear the brunt of the oil shock crisis as inflation continues to rise worldwide.

During the late February invasion of Ukraine by significant oil producer Russia, Western countries imposed hefty penalties on Moscow for what they termed unjustified conflict, leading to a jump in oil prices. The West has scrambled to find a replacement for Russian energy supplies in light of the restriction on exports of Russian energy. The scramble follows the EU’s announcement of a two-thirds reduction of Russian gas imports by the close of the year.

Although Germany is one of Europe’s most populous countries, its gas output barely meets 5% of yearly consumption. Consequently, Germany remains heavily reliant on imports from Europe and Russia. Germany has halted Russian imports and construction of the Nord Stream 2 gas pipeline in solidarity with the rest of Europe (which was supposed to take gas from Russia to Germany). As such, German authorities must look to other gas sources as a result.

Heating houses and industries, as well as powering automobiles, trucks, aircraft, and ships, all rely on oil and gas in Germany, and none of these sources can be easily substituted. Gas provides for 25 per cent of the country’s total primary energy consumption. Imports account for 97 per cent of the supply. The primary suppliers are Russia, the Netherlands, and Norway. If Germany has no intention for its economy to grind to a halt, it must find new sources of oil and gas.

Governments have declared they will double down on solar and wind energy from Washington to Berlin. However, while renewable energy generation is a long-term answer, the assumption that it can replace Russian oil and gas rapidly and at scale is dishonest at best and devastating for Western economies and consumers at worst.

Some Russian gas used to create electricity can be replaced by renewable energy sources like wind and solar power. Nevertheless, this remains viable only if wind and sun keep blowing and shining, necessitating a sizeable backup production capacity, much of which is powered by natural gas. Because of this, gas will remain a significant source of Germany’s energy for many years.

Natural gas is essential in many industries, including power generation; cheap, dependable, and twice as clean as coal. In 2020, in Germany, 44 per cent of the gas consumed was for heating houses, while 28 per cent went to industrial activities. Germany is also a significant provider of synthetic nitrogen fertilizer, and gas is the best and cheapest feedstock. Refining, chemical synthesis, and many other industrial processes rely on gas. A green energy replacement for this would be challenging, if not impossible.

In 2022, coal will overtake wind as the world’s leading source of power generation, as Germany has already confirmed. Lignite, the dirtiest and most polluting of all fossil fuels, will make up a portion of this. Because of its energy policies, including the substitution of nuclear power with Russia’s natural gas, Germany is in a predicament. Even Nevertheless, the European Commission is already absolving nations that have replaced Russian gas with coal, resulting in a rise in carbon emissions.

The African oil and gas factor

For the foreseeable future, Germany requires a sufficient and stable supply of non-Russian fossil fuels. Any discussion of energy security that is worth having must swiftly turn to the question of where non-Russian supply will come from in the future. A long-term energy strategy for Germany must include revising its current position on non-Russian nuclear energy that is free of carbon emissions. After looking east and west, Germany should turn south to Africa, where there is a lot of natural gas production, reserves, and fresh discoveries in the pipeline. Very little of Africa’s gas has remained utilized for internal use or export.

Shipping liquefied natural gas (LNG) from the West African coast would be a fast and convenient way for Germany to access African supplies. However, as part of Berlin’s objective of increasing Germany’s reliance on Russian gas and hence increasing Russia’s reliance on Germany, the government has not built a single LNG import facility. However, the present situation has prompted Berlin to declare that it will finally modify its stance and create LNG infrastructure.

In Africa, LNG loading terminals might potentially get created relatively fast. Above the offshore gas fields, floating liquefaction facilities generate, liquefy, store, and transport the gas to LNG ships, which carry it straight to importing nations. When the project is operational next year, Senegal and Mauritania will be among Africa’s top gas producers. While initial output from this field appears limited, it is expected to quadruple in a few years. The area is located inside a more extensive natural gas basin with far greater reserves.

Algeria is a major gas producer with significant undeveloped reserves, and many submarine pipelines connect it to Spain. Germany and the EU are already trying to increase pipeline capacity connecting Spain and France, from which additional Algerian gas may be sent to Germany and elsewhere. Europe should rapidly assist Algeria in developing new resources and increasing gas output. The Eastern Mediterranean Pipeline Project, which would deliver gas from Israel’s offshore gas reserves to Europe, is presently the subject of new pipeline discussions.

Senegal, which has lately identified huge offshore reserves, is another West African country critical to Germany’s efforts to resolve the oil and gas issue. The West African country borders a gas field with immense potential. On May 22, Olaf Scholz began his first three-day visit to Africa in Senegal as Germany’s chancellor, saying his country wanted to help develop natural gas fields off the coast of West Africa.

The Greater Tortue Ahmeyim (GTA) gas field, controlled by the governments of Senegal and Mauritania, is one notable current project in this region of West Africa that Germany is interested in. BP, a British firm, is exploring the deposit, which might store up to 15 trillion cubic feet of natural gas. After a pandemic-induced setback thwarted initial plans from taking off this year, GTA has scheduled the generation of the first barrels of gas in 2023.

The GTA project, sponsored by BP, will cost US$4.8 billion. When it opens next year, Senegal’s president, Mack Sall, expects it to enhance his country’s liquefied natural gas production to 2.5 million tons annually. Scholz, Germany’s Chancellor, sees potential for Germany to assist in developing the initiative.

“We have begun exchanging thoughts on this, and after these discussions, we will continue to do so quite extensively at the technical level,” he told German news network DW.

On the other hand, Senegal lags behind Algeria in terms of Africa’s gas reserves. Only Russia and Norway have delivered more gas to the EU in the last two years than Algeria. However, Senegal emerged as a prospective energy provider to the globe after discovering gas resources of up to 40 trillion cubic feet between 2014 and 2017. Local gas production is also beneficial to Senegal’s electricity supply.

Sall opposed a plan presented last year at the COP26 climate meeting in Glasgow by the United States, Canada, and other affluent nations to cease funding for foreign fossil fuel initiatives.

“At a time when numerous African nations are getting ready to harness their enormous gas resources, the cessation of support for the gas industry under the guise of gas being a fossil energy would pay a catastrophic cost to our growing economies,” Sall stated at a November China-Africa summit.

Sub-Saharan Africa is also crucial to the oil and gas debate.

Surprisingly, most African natural gas and oil sources lie in sub-Saharan Africa, including Nigeria, which possesses around one-third of the continent’s reserves, and Tanzania, opportunities Germany should seize.

The proposed Trans-Saharan pipeline would transport gas from Nigeria to Algeria via Niger, traversing a vast, ungoverned area. The proposed pipeline, if built, will connect to the current Galsi, Medgaz, Maghreb-Europe, and Trans-Mediterranean pipelines, which supply Europe from transmission centres on Algeria’s Mediterranean coast.

The Trans-Saharan pipeline would be almost 2,500 miles long. It could send up to 30 billion cubic meters of Nigerian gas to Europe yearly, roughly two-thirds of Germany’s Russian imports in 2021. Unfortunately, the Trans-Saharan pipeline will likely take a decade or more to complete and will face several hurdles as it passes through war and insurgency-ridden areas. The initiative should sail through if Germany is serious about energy security.

Germany might effectively kill two birds with one stone: It might stop funding Russian President Vladimir Putin’s cruel conflict and put its money where its mouth is by assisting Africa’s economic development and integration. Until recently, it has been part of Germany’s epic energy myopia to believe that progress can be accomplished without the use of conventional energy.

In truth, European members at the World Bank and other international development agencies have worked hard to prevent the funding of natural gas projects in underdeveloped countries. Their dishonest argument is that developing nations must instantly de-carbonize while ramping up coal and other fossil fuel output and otherwise living an energy-intensive, rich-world lifestyle.

The situation becomes even more outrageous given that Sub-Saharan Africa presently accounts for just 4% of global carbon emissions and will remain energy-poor for decades. The average individual in Ghana, Kenya, and Nigeria consumes less energy per year than a single American refrigerator. Not only will financing natural gas production in Africa spur much-needed economic progress, but it will also help Europe diversify away from Russia.

Germany and the rest of Europe can no longer deny the need to source significantly more gas from Africa while simultaneously assisting African nations in meeting their growth targets. If anything, it serves as a litmus test for how serious these governments are about addressing the new era of energy uncertainty.