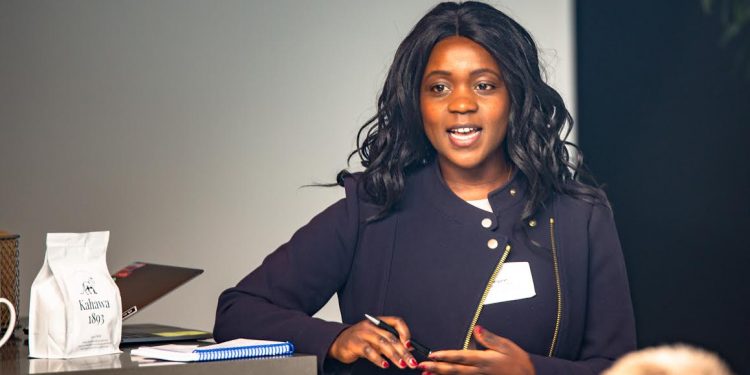 Margaret Nyamumbo. She is helping spread Kenya's coffee aroma in the US. [Photo/Conway Connect]

Kenya’s coffee farmers have over the years complained about the poor prices and mismanagement that bedevil the commodity.

While coffee was for a long time known as the main forex earner for the country, other sectors like tourism and ICT have overtaken its earnings. So rich was coffee earnings in a newly independent Kenya in the 1960s that it was nicknamed ‘black gold’.

Despite this growth, more and more farmers are abandoning coffee for other crops while others are converting the rich coffee soils into real estate.

However, a Kenyan lady is changing the manner in which Kenyan farmers perceive coffee production with a well-researched and planned business model that has taken Kenyan coffee to California, USA.

Margaret Nyamumbo is a coffee lover, a successful African woman entrepreneur, an MBA from the Harvard Business School, and now founder and CEO at Kahawa 1893.

It has taken her several attempts at being an entrepreneur.

She first shot into the limelight when she was inducted into Harambee Entrepreneur Alliance where she honed her skills and passion to develop strong brands in 2009. It would take more time and in 2017 she launched her company Kahawa 1893, with the name derived from the first time coffee was planted in Kenya.

Kahawa 1893 currently works with a group of co-operatives to help farmers in rural Kenya access global markets. Kahawa 1893 allocates 25 per cent profits to supporting women who make this rich Kenyan commodity accessible to the rest of the world, building a more inclusive coffee supply chain in Africa to empower women in particular.

Nyamumbo was incensed with the glaring inequalities that existed in Kenya’s coffee supply chain, with farmers receiving prices below their cost of production from middlemen, which is the source of poverty to most agrarians and particularly the women. African women provide 89 per cent of farm labour but own only 1 per cent of land.

She has graced many events and newspapers across the world laud her for her work on coffee and especially for her resilience in an area dominated by men.

The London School of Business graduate has worked at the World Bank as well as Wall Street before she walked off the financial district to start her company.

Nyamumbo was quoted by Harambean saying, “The way coffee is traded is outdated; it has not changed in over 200 years, and it does not reflect the progress we have made towards racial and gender equality.”

Derived from Harambee — Swahili for working together towards a common purpose — the Harambe Entrepreneur Alliance got its start in 2008. Founded by Harvard educated Okendo Lewis-Gayle, Harambe was inspired by the words of President Barack Obama, who urged Okendo at his college graduation to “hitch your wagon to something larger than yourself.”

Okendo decided to take the advice and the Harambe Entrepreneur Alliance was born. What began as a “dream on a piece of paper” has now blossomed into an alliance of over 250 Harambeans strong.

Culled from a competitive applicant pool of candidates from leading universities around the world, Harambeans are spearheading social and business ventures across Africa and have raised capital from leading investors in China, Europe, and the United States. Recognized by the African Union, the Economist and the Vatican, Harambeans epitomize the can-do spirit of the new generation of African leaders.

It is at this network where Nyamumbo has been able to hone her coffee skills for her Kenyan coffee to reach international levels. She recently spoke of her development and journey at Smith College’s Jill Ker Conway Innovation & Entrepreneurship Center.

“Coffee has always been a male, typically white, dominated industry. As a black woman entering and disrupting that space meant proving myself. When I went to conferences, people often assumed that I was a barista for one. I’m constantly trying to prove myself as a black woman and that’s been a challenge.”

She is now exploring how she can use technologies like blockchain to track and respond to the coffee value chain more aptly, minimizing losses and also safeguarding the interests of coffee farmers. In this system, consumers can scan a QR code and be able to give a tip to the farmers who have grown the crop.

The tipping is more targeted as this is linked to M-Pesa allowing the farmer to receive the tip instantly.

“If you pay 5 cents tip for each cup of coffee, it doubles the farmer’s income. Through traditional Fair Trade, for each US$1 premium you pay, only 5 cents reach the farmer with the rest lost to the supply chain,” Nyamumbo told Coin Gape, a magazine about cryptocurrencies.

“Harambe gave me access to a pool of world-class African entrepreneurs, something that helps professionals like myself discover deeper insights and more relevant connections to advance our products and services.”