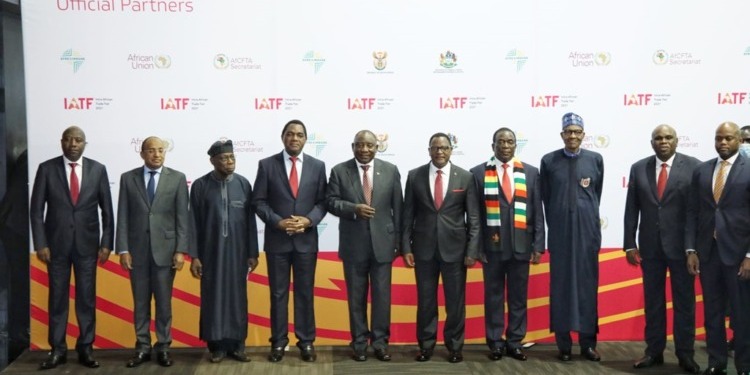 African Presidents who attended the launch of the IATF2021 Durban. Building Bridges for a successful AfCFTA is the theme for this year’s Trade Fair. [Photo/Afreximbank]

US$40 billion worth of deals expected during IATF2021 Durban

Africa is now taking concrete steps to write its own economic success story and the Intra-African Trade Fair is part of that story.

Building Bridges for a successful AfCFTA is the theme for this year’s Intra-African Trade Fair (IATF2021) being held in Durban, South Africa.

The fair has attracted thousands of visitors at the Durban International Convention Centre where there is also a formidable demonstration of pan-African leadership support for the IATF2021.

In underscoring its importance and beneficial impact in driving dramatic trade growth and investment across Africa, its opening ceremony was addressed by seven African Heads of State.

Among the Heads of State who addressed the fair were South Africa President Cyril Ramaphosa, Muhammadu Buhari of Nigeria and his predecessor Olusegun Obasanjo who is also the Chairman of the Advisory Council of IATF.

In his keynote address, Ramaphosa declared that South Africa is ready to work with other African countries to drive more balanced, equitable and fair-trade relations for the benefit of the continent.

He said the Trade Fair is about building bridges, connecting countries and people from across the continent.

Ramaphosa added that Africa is now taking concrete steps to write its own economic success story and the Intra-African Trade Fair is part of that story.

With Africa opening up new fields of opportunity, Ramaphosa said that seeing more of ‘made in Africa labels’ is critical if the continent is to change the distorted trade relationship that exists between African countries and the rest of the world.

He emphasised that the situation where Africa keeps exporting raw materials while importing finished goods from those materials is no longer tenable. By promoting trade in Africa, he said, “we strengthen our own industrial base and produce goods for ourselves and for each other”.

Building Bridges for a successful AfCFTA

The African Continental Free Trade Area (AfCFTA) was launched on January 1, 2021, and it is indeed a game-changer since it is opening up Africa for more trade within itself.

Some of the benefits of the AfCFTA include:

With this in mind, President Buhari said that it is a great achievement for Africa as it embarks on this collaborative journey towards collective economic prosperity.

He noted that Africa cannot achieve this goal by talking alone and thus the implementation, though a difficult journey with many challenges, is possible if both public and private sectors collaborate. On the public sector side, he said that governments must support local entrepreneurs to build scale, and therefore improve productivity.

Buhari added that the AfCFTA must ensure that Africa becomes a marketplace where no country is left behind. This is where the continent will create jobs and enhance revenues for all parties.

The African Continental Free Trade Area Secretariat Secretary-General, Wamkele Mene, observed: “The next wave of investment in African markets must focus on productive sectors of Africa’s economy in order to drive the continent’s industrial development in the decades to come.”

Coming at a time when Africa is facing compounded challenges, the IATF2021 is a demonstration of Africa’s defiance of the dark clouds gathered by among others the Covid-19 pandemic.

The President and Chairman of the Board of Directors of Afreximbank, Prof. Benedict Oramah, added that the convergence of Africans to chart the Continent’s trade and investment future is a departure from the colonialists’ intention of partitioning Africa along physical boundaries stretching over 87,000km. This, he said, was not for the benefit of Africans, but for their own.

Prof. Oramah said that the stimulation of economies through the IATF2021 is not about trade but about job creation and holistic economic recovery backed by political support. The IATF, he added, also offers a comprehensive solution since it is not just a trade fair.

The Premier of the host province, KwaZulu-Natal, Sihle Zikalala, said that the African countries’ development is interwoven with each other and is inseparable.

He said it is time for African countries to quit relying on the remnants of colonialism and instead focus on defining themselves as a distinct entity in the world. Africa’s natural minerals must no longer be used to enrich developed and industrialized countries at the expense of the continent’s impoverished, he added.

The African Union’s Commissioner for Trade and Industry, Ambassador Albert M. Muchanga, said that in the medium term, the vision is to transform the Intra-African Trade Fair brand “into a self-financing special purpose vehicle, which will be owned by all African Union Member States and Pan African financial institutions.

IATF runs through to November 21 and is expected to close upwards of US$40 billion worth of deals. It is being attended by over 1,100 entities exhibiting their goods and services to over 10,000 delegates, visitors and buyers from over 95 countries from the continent and beyond.

As a result of this recognition, an automotive forum has been established, which is of great value. The rubber and other raw materials industries would benefit from a thriving automotive sector, which in turn would have a positive impact on other supporting industries.

A one-stop pavilion for young entrepreneurs will be set up at this year’s African Youth Startup event, which will provide information on how to establish a firm, as well as assist them in getting it off the ground. Africa’s future lies in the hands of the continent’s young people, who have been carefully selected to participate in the pavilion.

Creative Nexus Africa, a showcase for some of Africa’s best creative minds, will allow visitors as well as exhibitors alike a glimpse into how their work can inspire and excite visitors and exhibitors alike, as well as how their vision can help to transform the trade and investment frontier for a continent that is bursting with untapped talent.