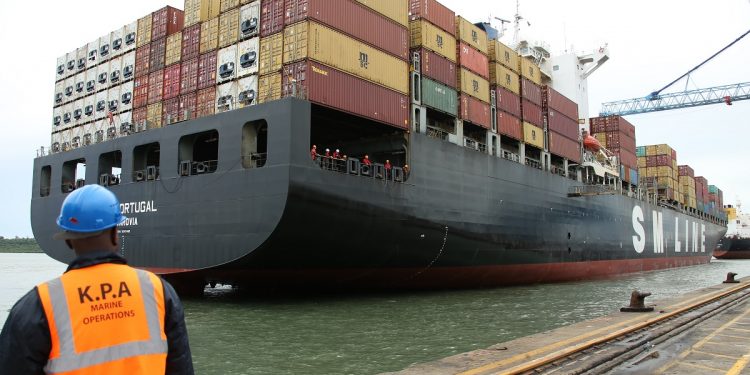 MV. MSC Portugal, the longest and wider container ship to call at the Port of Mombasa. Kenya and Tanzania have to improve their ports’ efficiency to grow business. [Photo/KPA]

The rapidly increasing population and a growing consumer class across Africa are creating a big demand for imported goods.

This means that countries that act as the gateways to the continent improve cargo transport to tap into this evolving market. Requirements will need improvements in containerized cargo which will allow efficiency in supply chains and reduced import costs.

There are 16 landlocked countries in Africa hosting 30 per cent of the continent’s 1.2 billion cargo transportation.

Interestingly, all these landlocked countries are net importers making them dependent on their neighbours to access the sea. Kenya is among the countries fronting an ocean, the Indian Ocean, making it a transit country for Uganda, South Sudan, Rwanda, Burundi, Somalia, northern Tanzania, and the eastern parts of the Democratic Republic of Congo (DRC).

To ensure that the Mombasa remains suitable for improved service delivery, the government of Kenya dispatched an inter-ministerial team from the National Treasury, Interior, Transport and Trade ministries to improve efficiency at the port last year.  The team formed in September 2019 was to look into aspects of trade facilitation including work permits issuance, security and the relationship, and cooperation between the inter-agencies working at the port.

Kenya’s Finance Cabinet Secretary, Ukur Yatani, who spoke at the time, said that Kenya Revenue Authority (KRA) staff would also have set targets in a bid to ensure that the port was performing optimally.

East Africa’s investment hub has to improve efficiency if it is to continue doing business with the East African nations which use it as a hub.

The Port of Mombasa is strategically located approximately halfway between South Africa’s Durban port and major ports in the Middle East. This makes it the gateway to east and central Africa. While it has been a hub for international trade since the late 19th Century, the port is facing stiff competition from Tanzania’s Bagamoyo Port which is located 75km north of Dar es Salaam.

With new investments in Dar es Salaam and more spending on roads and railways, the Bagamoyo Port is targeting –to become a hub that will challenge Mombasa’s dominance of in neighbouring Kenya.

But, Kenya is not letting this happen, just yet.  To address the growing constraints observed in Mombasa, Kenya has undertaken to construct 32 berths at the new Lamu Port.  Three berths are already complete as the Lamu Port-South Sudan-Ethiopia Transport (LAPSSET) Corridor takes shape.  The first phase of the port will see three berths handling container, convectional and bulk cargo vessels.

LAPSSET is a long-term vision seeking to transform the economy of Northern Kenya, connecting through a standard-gauge railway line to South Sudan’s capital Juba. The project also has oil pipelines to South Sudan and Ethiopia and an oil refinery. In addition, there are three airports, and three resort locations in the Kenyan towns of Isiolo and Lamu and at the shores of Lake Turkana.

When complete, the LAPSSET project, will link Kenya to Ethiopia and South Sudan, its two northern neighbours, opening up the region to socio-economic development through the promotion of cross-border trade. The whole LAPSSET Corridor project is estimated to cost US$26bn and will be fully completed by 2030.

For the two East African nations, reaping big benefit from the ports is possible since access to the ocean gives them enormous trade advantages over their neighbours. Oftentimes, landlocked countries like Uganda and Rwanda, who rely on imports have openly spoken about their frustration over the high cost of transporting goods across regional borders from the ports in the two countries.

The World Bank has for several years said that Kenya and Tanzania could boost their annual gross domestic product if they take measures to improve their ports’ efficiency.

With stakes upped in the recent developments of the ports, the two nations’ move to improve their facilities is a step in -that direction but returns from this expansion are not guaranteed until they address issues that keep coming up from the landlocked nations.

The nation that manages to offer the best service for the best charges will win in the supremacy tug-of-war between the two nations.

Since Kenya and Tanzania want to be economically – supreme in the region, they have to ensure that they do not lose ground after expanding their ports’ capacities.

In October last year, Rwanda inaugurated Kigali’s first inland port in a bid to reduce the time and money spent moving goods to its hinterlands from the main regional ports of Mombasa and Dar-es-Salaam.

Globally, more than 90 per cent of trade is currently carried out by the sea. However, trade in Africa is hampered by poor infrastructure, poor transport networks and connectivity. -In a recent report, PricewaterhouseCooper notes that it costs up to 3.5 per cent more to transport a single sea container in Africa than in other regions.

While this drives up importation costs, it does not make economic sense in the long term since landlocked nations, who are the bulk of trade with countries such as Kenya and Tanzania -could– and -will– move to better alternatives if ports remain inefficient.

In the World Bank report, the sub-Saharan Africa region could see a GDP growth of2 per cent with improved port performance.  But as –things stand now, we just have to wait and see which of the two East African nations will pull -ahead to strike better deals for their economies.