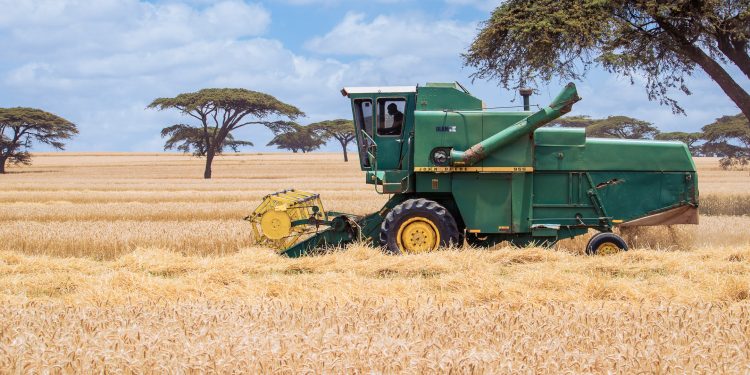 Wheat harvesting in Kenya. Africa can stop relying on importing food if it invests in its agricultural sector. [Photo/Musyoki Musyoka]

Kenya’s economy is on its knees burdened by debt and wastage of resources which have plagued President Uhuru Kenyatta’s government.

At the time of the implementation of the ban on April 28, vegetable oil prices were already at their highest.

The reason for the ban was that cooking oil in the archipelago nation was in short supply and prices were going up. In several cities, people were waiting in line for hours at distribution centres to buy cooking oil at subsidised prices.

Due to this, Southeast Asia’s most populous nation had its authorities worried that the lack of supplies and rising prices could cause social unrest. This led to the import ban.

Africa was also affected by this ban and Kenya was among the countries that started feeling this almost immediately.

Kenya’s story with agricultural productivity goes way back to the end of the late President Mwai Kibaki’s tenure in 2012. The late president had set the economy for success and independence from a reliance on imports in several sectors. Thus when his predecessor took over the reins, the expectation was that the economy would flourish. Almost a decade later, Kenya’s economy is on its knees burdened by debt and wastage of resources which have plagued President Uhuru Kenyatta’s government.

With just less than two months to go before the end of Kenyatta’s government, the country’s various economic sectors are struggling to stay afloat.

There have been massive job losses and decreased agricultural output has led to enormous economic bleeding which has left the country sagging. The economy is drained.

The blame games have been on and the administration has been hiding behind the outbreak of Covid-19 and later the Russia-Ukraine crisis. While these events have affected global trade and way of life, Kenya should have been in better stead to withstand the shocks.

Kenya is a country that relies on imports and thus the situation is being blamed on factors beyond the government’s control. But is this the truth?

According to Ephraim Njega, a management consultant by profession, some Kenyans are wrong when they claim that prices have gone up everywhere.

Njega argues that even around the world, a kilogramme of maize does not cost more than US$0.34. He blames a series of failings by the government for the disaster that has befallen Kenya.

For example, even with projections of drought, why did the government not allow duty-free imports early enough to avoid the problem? Also, who was responsible for messing up the Galana-Kulalu food security project, which was supposed to deliver a 2-kilogramme bag of maize for US$0.60?

The Galana-Kulalu project was one of Kibaki’s highlight projects which could have addressed Kenya’s perennial drought problems. The multi-billion shilling project was discontinued under Kenyatta’s government despite gobbling up billions of taxpayers’ money.

Kenya has also been dealing with runaway inflation and as the shilling depreciates in value, import prices are going up. The depreciation of the Kenya shilling is due to the high external debt and a high trade deficit.

This means that the sectors which could have cushioned Kenyans in case of a crisis such as they are witnessing now cannot be relied upon.

Njega adds that in April 2013, when Kenyatta took office, the government owed US$17 billion to international lenders but that debt has grown more than 800 per cent now. Kenya is spending an equivalent of 56 per cent of its revenues to repaying the public debt.

This means that the country does not have enough to spend on development and with the spending on repaying foreign debt, the shilling weakens even more.

Last year, Kenyatta said that by December 2021, he would reduce the price of electricity by 33 per cent. This has not been fully achieved meaning that the costs to companies are being passed on to consumers whose spending power is waning by the day.

This then begs the question: can Kenyans really blame international events for the failings at home? Does it mean that if the Ukraine crisis continues Kenyans will starve to death because they have no alternatives?

Even if the prices are going up everywhere, it behoves the government of the day to ensure that its people do not suffer unnecessarily. Since price increases do not happen overnight, governments should always have fall-back plans to ensure that there is continuity regardless of circumstances beyond their control.

Cooking oil prices began to go up in 2020 and the government should have empowered the farmers to grow crops that are used for oil production. Taking into consideration that some of these crops take less than five months to mature, there should never have been a crisis.

While it is not representative of what is happening in other African countries, it shows how poor planning and lack of sound policies can run down a country. As a country, this East African nation is well-endowed with natural resources.

Kenya has adequate arable land and adequate water for irrigation. While rains are not reliable anymore, the country has the capacity to build dams and other water storage infrastructure to ensure that food production can go on unhindered.

Kenya has the capacity to produce enough maize, wheat and most oil-producing crops not just for its consumption but also for export. However, the country’s resources remain untapped which is continually increasing the import bill of commodities that the country can comfortably produce.

Unless Kenya, and by extension Africa, invests in its people in the agricultural sector, it will be impossible to avoid a repeat of the consequences of Indonesia withholding its palm oil or Russia and Ukraine being unable to export their wheat and maize.

Hunger is a choice by the powers that be.