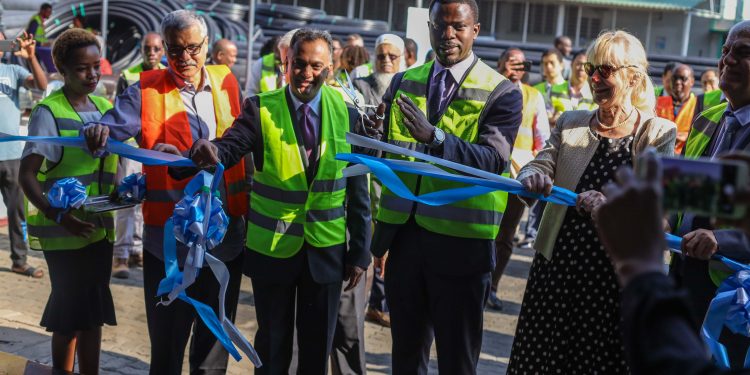 by The Exchange
in East Africa, Industry and Trade, Manufacturing
0
Share on FacebookShare on LinkedIn

Plasco Limited in Tanzania is the largest manufacturer of plastic pipes for water supply and sanitation in
the country has launched a USD 4million factory expansion using‘Weholite’ technology, the first of its
kind in East and Central Africa used to produce Structured Wall High Density Polyethylene (HDPE) pipes
for Sewerage and Drainage, Manholes and Tanks forstorm water retention and drinking/potable water.

The company aims to provide modern water storage and sanitation solutions to the region through the
use of this new technology that is now available in Tanzania and East Africa as  a whole. The factory was
inaugurated in Temeke, Dar es Salaam by the Minister of Industry and Trade, Innocent Bashungwa;
other government official in attendance included the Deputy Permanent Minister of Water, Emmanuel
Kolobelo.

Speaking during the event, Hon. Bashungwa remarked on the company’s use of innovative technology to
accelerate the progress of the pipe manufacturing industry in Tanzania. “The ministry applauds such
innovations which directly contribute to catalyzing industrial development and increases the
competitiveness of our industries, locally and internationally. The factory expansion and its use of
cutting-edge technology is a significant milestone in the revival of the industrial economy,” said
Bashungwa.

He added that the new technology will attract more investment and boost the economy of the country
through exports. Bashungwa urged other industries to invest in innovative technology to boost the
quality of their products to international standards.

Speaking on behalf of the company, Alimiya Osman, the Chief Operating Officer, disclosed that the
country will no longer need to import plastic pipes as the investment in new equipment meets the
growing demand and aligns with local content policy. He added that the use of HDPE materials ensures
that the pipes do not rust or corrode and adheres to international standards.

“Since the start of the company’s operations in 1993, we remain committed to manufacturing and
supplying quality, robust and leak proof plastic piping systems to our customers in Tanzania and
neighboring countries. The investment in new equipment supports the government’s efforts to
develop critical infrastructure to improve water supply and sanitation systems that will improve the lives
of Tanzanians throughout the country,” concluded Alimiya.

As the country’s leading pipe manufacturer, Plasco Limited employs over 100 Tanzanians and supports
the country’s industrialization drive and ambitions to become a middle-income economy by 2025.