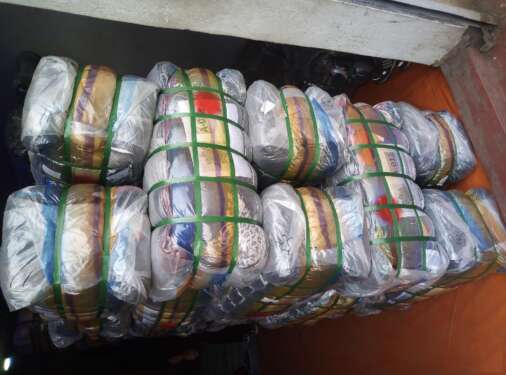 Mitumba bales ready for dispatch. Kenya is one of the largest importers of second-hand clothes in Sub-Saharan Africa. [Photo/Jiji]

The second-hand clothing sector is an important contributor to Kenya’s economic growth and the continued demand for these clothes means that the government can continue collecting taxes.

East Africa’s economic hub is one of the largest importers of second-hand clothes, popularly known as mitumba, in the Sub-Saharan Africa (SSA) region for its use and also export to other countries. A report by the Institute of Economic Affairs (IEA Kenya) notes that demand drives the second-hand clothes market.

The annual value of this trade was reported in 2019 to be on average Ksh 18 billion (US$180 million) which is less than 1 per cent of the total country’s imports. The total imports of textiles in Kenya were valued at around Ksh 131 billion (US$1.3 billion) depicting that second-hand clothes represented 12.5 per cent of the country’s total imports.

IEA notes that taxes levied on second-hand clothes are import duties, a railway development levy and an import declaration levy.

Upon being received at the port of Mombasa, second-hand clothes undergo a chain of processes before reaching the final consumer. At the port, the clothes are inspected and cleared. Accumulatively, the importer incurs about Ksh 1.5 million per container in taxes. If there is a delay which is often the case, the importers incur demurrage charges which could accumulate for weeks.

Normally, a 40 feet container carries an average of 24 tonnes. Out of the 185,000 tonnes imported in 2019, it then is averaged to have been transported in 8,000 forty feet containers. Each importer pays an average of 1.5 million per container. This then implies that the government of Kenya received an average of Ksh 12 billion in import duty from second-hand clothes.

The sector contributes at least Ksh 1 billion in revenue per month.

Every wholesaler or retailer in the sector has to pay for a business permit and a fire certificate that is often accorded based on the size of your business. On the other hand, they further pay a turnover tax that is at a 3 per cent rate of their gross sales. Equally, other businesses linked to the sector such as warehouses and truckers pay sales tax, income and corporate tax, amongst a slew of other taxes.

Notably, the supply and demand for new purchases from the textile industry differ from used clothes.

There is a significant difference in prices between the two products, with used clothes being considered to be cheaper. Given the second-hand clothes, industry and formal textile industry are separate markets, players in those markets do not necessarily compete with each other.

A fundamental revelation of this information is that in 2016, the value of the median and mean the purchase of new clothes was Ksh 450 and Ksh 783 respectively for three months. It demonstrates that half of the households that bought new clothes made purchases of Ksh 450 or less, with the other half spending more than that amount.

The report adds that the average cost of the clothing items purchased comes to Ksh 783 for the same period.

Both the median and the mean value for purchases of used clothing and footwear are below the equivalent values for new items. With a purchase mean of Ksh 409 and a median of Ksh 280, these values are 33 per cent and 91 per cent lower for used clothes respectively.

This position confirms that the purchasers of second-hand clothing and footwear are price conscious and search for value due to their lower incomes. From a consumer’s viewpoint, it is evident that purchase decisions reflected here are based on making choices on what items are available at the most cost-effective prices on each side.

The typical income earner in Kenya spends about 40 per cent of monthly earnings to procure food alone and the rest of the income is spent on shelter, transportation, education, health, and other needs. 2.5 per cent of private consumption in Kenya was spent on clothing and footwear for the year 2019.

This spending amounts to Ksh 197.5 billion which comes to an average of Ksh 4,150 per person per year for all purchases of second-hand garments, new clothes and footwear. Compared to the rest of the middle-income countries, Kenyan consumers spend much less on clothes and footwear.

An insight that comes from this is that imports of second-hand clothes constitute about 1 per cent of all imports’ monetary value while it accounts for 2.5 per cent of all private spending. 67.8 per cent of Kenyan households in urban areas spent Ksh 1000 and below, while the corresponding figure for rural dwellers was 79.2 per cent.

This finding is consistent with the evidence that rural dwellers have lower incomes and are more interested in affordable clothing and footwear, notes IEA.

There are linkages from the second-hand clothes industry to other sectors such as transport, finance, insurance, warehousing, and research amongst others.

Second-hand markets have, in part, saved the environment from the emission of polluted air caused by the production of new clothes.

The Kenya National Bureau of Statistics (KNBS) Manpower Survey classifies second-hand clothing dealers under the second-hand clothes and footwear industry. As a whole, the industry employs an estimated 10 per cent of the extended labour force.

The IEA report concludes that the textile industry and used clothes industry are separate markets dealing with different products and income segments.

Given the second-hand clothes industry and formal textile industry are separate markets then players in those markets are not necessarily competing with each other, adds the report.