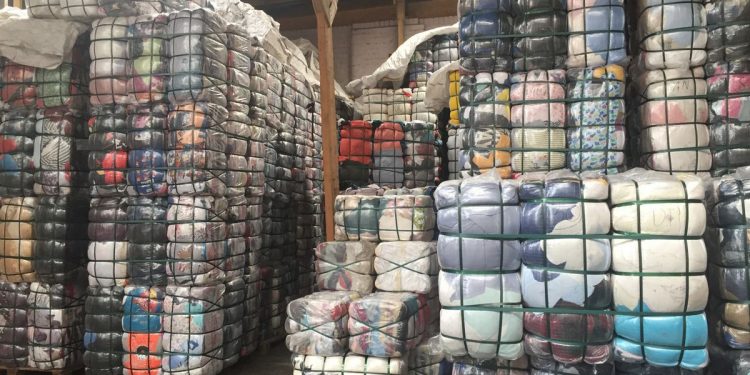 Bales of used clothing ready for shipment to Africa

Second hand clothes dominate the streets of major cities in Africa with importers spending billions of dollars to bring the clothes to Africa, a sizable business that has caught the attention of Donald Trump

by Kimani Chege
in Industry and Trade, Rwanda
0
Share on FacebookShare on LinkedIn

Sub-Saharan African clothing and footwear market is worth $31 billion US dollars and growing. In a series of articles about the industry in Sub Sahara Africa, we will explore the policies, trade and the budding creative fashion industry in the region. This is the second part of the series where we focus on the raw material for the textile industry.

And also: Africa Fashionomics: Business of Fashion in Africa led by Ethiopia

East African Community had one ambitious goal; to get rid of second-hand clothes in the region and shield their nascent textile industry from adverse effects of these clothes from U.S and Europe. The goal was already set and the countries would effect a hike on the duty charged on second-hand clothes. East African Community (EAC) members Kenya, Tanzania, Rwanda and Uganda increased tariffs on used clothing in July 2016. Rwanda hiked import duties from 20 cents to $2.50 per kilogram.

This, however, did not happen. A petition to the US President Donald Trump by the Secondary Materials and Recycled Textiles Association (SMART), a trade group representing the US used clothing exporters changed all this. All the countries apart from Rwanda backtracked and the US Trade Representative slapped an embargo to Rwanda.

The USTR pushed the East African to accept second-hand clothes without increased duties or risk losing the lucrative Africa Growth and Opportunity Act (AGOA) benefits. Rwanda stood its ground and in the consequences that followed, was blocked from accessing the US market.

“We regret this outcome and hope it is temporary,” Deputy USTR C.J. Mahoney said in a statement, adding that the move would affect about $1.5 million in Rwandan exports or about three percent of its total exports to the United States.

in 2017 the East African Community (EAC) imported secondhand clothing worth $151m according to UN data.

But why did Rwanda stand its ground and why did other East African countries fall under the pressure of U.S. Second-hand clothes, commonly known as Mitumba in Kenya or Chagua in Rwanda is big business. Last year, Kenya traders imported second-hand clothes worth Sh12.74 billion.

Textile sales account for more than 90 percent of Agoa exports through which Kenya netted Sh35.2 billion in 2017. This was too painful to lose hence Kenya withdrew from the collective agreement with other EAC members.

Across Africa, daily shipments of recycled clothing, sent largely from the US, UK, and Canada, fuel a multimillion-dollar informal industry that employs thousands of local retailers who turn a profit reselling the items. Sub-Saharan Africa imports the largest share of used clothing donations.

It is estimated that as much as 80 percent of used clothes donated by British residents end up in secondhand markets in Africa each year. In Britain alone, an estimated 365 million unused apparel, worth approximately £5.4 billion ($7 billion), is given away annually, mainly to sub-Saharan Africa. Most of this is given as aid but are quickly converted into a billion-dollar business.

Ghana is the largest market for UK give-aways, followed by Benin and Kenya.

According to tralac (Trade Law Centre) is a public benefit organization based in the Western Cape region of South Africa, 62% of total African imports are accounted for by only 10 countries, amounting to over US$600 million in 2016. East African countries feature prominently with Kenya; Uganda and Tanzania accounting for 25% share of total Africa imports of used clothes.

Read also: Why it’s not if but when Africa crumbles over rising debt

This has had a toll on the textile mills across the continent. For example, in the early 1990s, Kenya had about 110 large-scale garment manufacturers. By 2016, the textile mills had declined to just 15, according to Fashion Revolution.

This is because the cost of purchasing second-hand clothing is almost 70 percent cheaper than a new garment prompting many people to buy them instead of spending their money on a new item.

Rwanda is keen on developing its textile industry and promote ‘Made in Rwanda’ garments. Kenya on its part has revived several of its textiles companies in a bid to nab some of the local users.

But is not only the US and European used clothes that are ruining local industries. According to the USAID, in a report titled ‘Overview of the Used Clothing Market in East Africa: Analysis of Determinants and implications’. Chinese exports of ready-made clothes to the EAC reached $1.2 billion in 2016, dwarfing the value of used clothing imports by a factor of four.  It also states, “Chinese imports, particularly the undocumented and untaxed that flood the market, pose a much greater danger to EAC domestic industries.”

On the flipside, Mitumba businesses across the continent employ thousands of youths and provide a living for more people. This has been noted as one of the reasons why banning these items was such an unpopular move. Secondly, second-hand clothes provide African youth with top of the range of fashion labels at a very discounted rate.