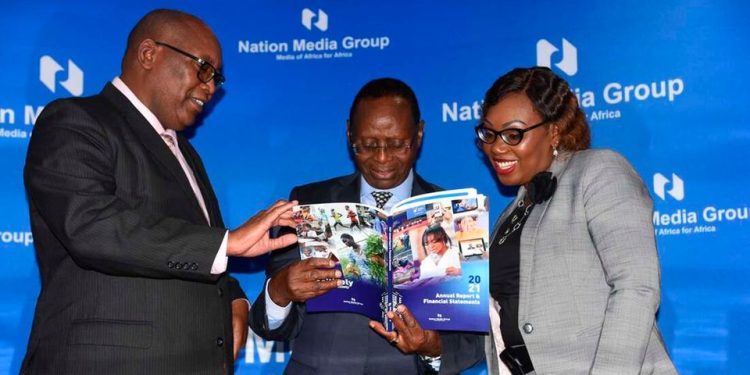 The Nation Media Group’s profit for the first half f to Sh247.28 million, a 13.1 per cent decrease from the Sh285.2 million it reported in the first half of 2021 amid an increase in the cost of printing news around the world.

Nevertheless, the group’s sales were practically flat, falling by 0.6% from 3.720 billion in the first half of the 2021 fiscal year to 3.6959 billion in that same period.

The company’s management credited the group’s consistent turnover to development in the broadcast industry, increasing revenue from digital goods and services, and the expansion of niche markets for their print products despite rising newsprint prices that offset the gains.

Compared to the same period in the prior year, the entire group’s operating costs were lower by 4.7%, coming in at Sh 2.7 billion rather than Sh 2.8 billion. This result was determined to be attributable to the group’s utilization of cost management inputs throughout the duration of the Covid-19 pandemic.

Because of an increase in the cost of sales caused by a global rise in newsprint prices and a depreciation of the Shilling in comparison to the dollar, the gross profit margin decreased by 4.5 percentage points, falling from 86.0 per cent in the previous year to 81.5 per cent in the current year.

In spite of the difficulties encountered, the group maintained their confidence that they would make progress in the second half of the year.

NMG management made this statement,

“We expect better performance in the second half on improving the global business environment and potentially uptick in business activity in Kenya post-election; the favourable operating environment in the rest of East Africa will likely prevail.”

In spite of the fact that an interim dividend was not paid out, the management of Nation Media stated that the company would keep its attention fixed on the development of new products across all of its channels and platforms in order to boost audience acquisition, engagement, and optimal monetization of its extensive digital footprint.

NMG is looking to innovate their products in order to increase its revenue diversity. In order to complement its transition to digital content and diversify revenue streams from traditional sources, the Nation Media Group (NMG) is counting on product innovation and organizational transformation to achieve these goals.

Moving forward, the focus will be on two key pillars, product innovation and organizational transformation, which will enable us to utilize our multi-channel platforms to drive audience acquisition, engagement, and monetization of content.

Following the company’s entry into the digital paid content market through the Nation will contribute to an increase in the company’s revenues.

Earnings from traditional sources, such as advertising and sales of print newspapers, will be diversified thanks to the African brand’s efforts. In addition to this, the company will investigate possible mergers and acquisitions.

“We are now identifying potential prospects for mergers and acquisitions involving goods that will assist the Group in driving value in critical social impact sectors such as agriculture, youth, the environment, education, technology, and a wide variety of other areas.”

Listed agribusiness company Kakuzi PLC reported a net profit of Sh341.3 million for the year’s first half. This represents a gain of 75% when compared to the net profit of Sh194.6 million reported during the same time in the previous year.

The success resulted from rising sales of the company’s avocado and macadamia crop products and continuously expanding revenues from the company’s attempts to diversify its market and product offerings.

The company’s total sales increased to Sh1.02 billion, an increase from the Sh888.95 million that was booked during the same period of time the previous year.

The half-year financial report for Stanbic Holdings, which ended on June 30, 2022, revealed a net profit of Sh4.8 billion for the period.

The performance is an increase of 37 per cent compared to a profit of Sh3.4 billion reported during the same period the previous year.

The rise can be ascribed to the company’s robust business momentum and its successful digital transformation strategy execution.

Kenya: 5 things new government could do to reduce the country's over-reliance on debt