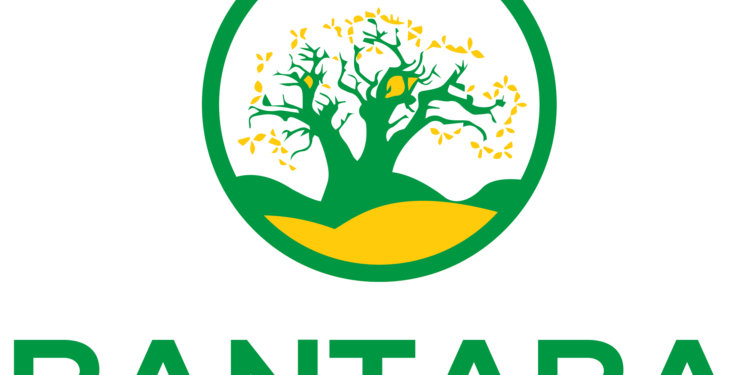 This platform will focus on empowering the African start-up ecosystem, as well as mobilize the resources necessary to support the women and men addressing Africa’s biggest challenges

Greater African unity amongst the 1.3 billion people, spread across 54 countries with diverse cultures, languages, and sizes, has been an aim for decades to facilitate economic, social, and political progress.

Ironically, the desire to strengthen bonds between Africans doesn’t stop at the continent’s shores. Instead, it extends to those who are part of the African diaspora -people of African origin living outside the continent who are willing to contribute to Africa’s development.

In the past, contributing to the development of Africa in a meaningful way required members of the diaspora to return home. A difficult transition that many were reluctant to make. However, today, technology presents new opportunities for the African diaspora to impact the continent without moving. And the Sweden-based startup, Bantaba hopes to lead the charge.

The Community-centered platform that will foster innovation in Africa by enabling start-ups to access diaspora’s resources was launched in an online event that featured Co-founder and CEO of Zuri Health Ikechukwu Anoke, In attendance was Faith Gathungu, the Director of Young Engineers Kenya, who represented start-up founders in Africa.

Sweden based Kenyan Erick Mokaya of Mwango Capital and Finland based Burkinabe Issouf Ouattara of Fasodrones who were also present spoke on behalf of the diaspora.

This platform will focus on empowering the African start-up ecosystem, as well as mobilize the resources necessary to support the women and men addressing Africa’s biggest challenges

In an effort to strengthen the connection between the diaspora and African entrepreneurs one of the issues highlighted was the role that the African diaspora community can play to alleviate the challenges of African startups.

“Raising capital in the diaspora is key and I like the approach that Bantaba is using because we have complained about subtle discrimination when it comes to African startups funding. Take for instance in Nigeria, we raked in 27 billion dollars from remittances in 2018 which was more than oil profits. It would be great if we can harness diaspora funding and its human capital,” Ikwechuku Anoka said, further asking the diaspora to show faith in Africa based businesses. 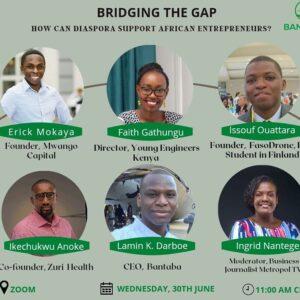 similar thoughts were shared by Faith Gathungu adding that some of the main challenges included lack of access to advanced technology and infrastructure hence requesting diaspora to invest to enable tech-based startups to grow and scale their businesses.

According to Faith, many start-ups lacked basic knowledge of starting up something that she says is a result of lack of mentorship and exposure.

“This is not just in Kenya but Nigeria and many other countries. These are areas the diaspora needs to look at. The pandemic itself has been a challenge that has affected our business plans in ways that we don’t know how to update our pitch decks,” Faith said during the webinar dubbed Bridge the Gap.

The event also highlighted the magnitude of talent and how multicultural identity can be an asset to Africa. While money is part of the equation, soft skills are important.

Erick Mokaya, a PhD student at Stockholm School of Economics, said that Diaspora Africans are competent and possess skills acquired over time, some with venture capital and private equity arguing that this ranges from refining your pitch deck, how to speak to investors and tapping into multicultural factors like keeping time.

“Having a diaspora input helps in cases where one can look at the pitch deck with local eyes but international perspective putting it in global terms where everyone else understands,” said Erick Mokaya.

The Bantaba platform comes in at a time where Businesses have been hardly hit by the Covid-19 pandemic, a situation that forced many to close down and other crippled to death.

Start ups are at high risk of kicking off in these economic times and thus this platform comes as a ray of hope for the businesses.

Issouf Outtara, is an experienced entrepreneur in diaspora and who is currently pursuing his PhD in Finland and founder of Fasodrones, a startup in Burkina Faso, Much of his faith was that Bantaba would build trust making diaspora want to invest back home:

“While we talk about capital and talent we forget diaspora is also building start-ups abroad. This can be leveraged to make sure start-ups can collaborate hence sharing ideas.”

Bantaba CEO, Lamin K Darboe, speaking during this online event said that he was confident that the fact that the platform was founded by Africans, places the company in a position to solve some of the problems the start-ups are facing.

“We are best placed to start this revolution as we can relate to these problems and understand the problem. Statistics currently show that a lot of funding even within Africa itself goes to non-African founders. . For instance, in Kenya, only 6% of VC funding goes to local founders. Why is this the case? I think it’s because the people doing the funding don’t have a good understanding of the market and this is where we as the diaspora have an edge and this is where we come in,” Lamin said.

Other challenges highlighted were how the government regulatory framework can be improved to encourage a vibrant entrepreneurial ecosystem on the continent. It was unanimously agreed that Governments across the continent still have more work to do in this regard.