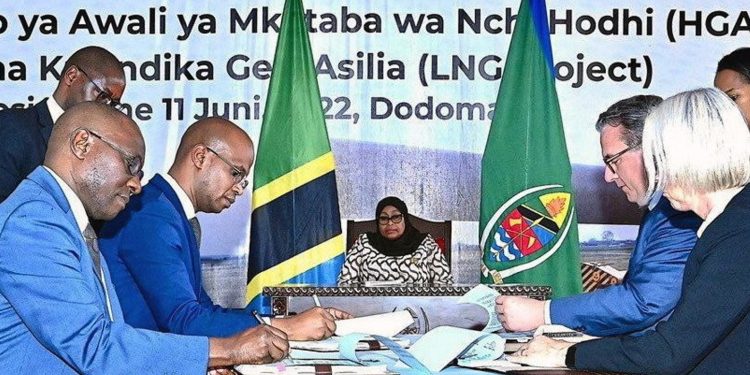 LNG in Tanzania is now a major sector of importance as Shell, ExxonMobil and Ophir Energy invest in Tanzania natural gas base: Photo by Pan African Visions

Exxon Mobil and Shell investment on LNG in Tanzania will transform the economy and boost Tanzania's industrialisation ambition.

Tanzania’s Liquified Natural Gas (LNG) base just got much more interesting as the government of Tanzania and a consortium of oil and gas giants—Shell, ExxonMobil, Equinor, and Ophir Energy ink an initial Host Government Agreement (HGA) to realize a $30billion LNG project in Tanzania.

Over the past five years, LNG in Tanzania has grown to become another crucial tool for Tanzania to enhance its economy and transform its energy sector for the long term.

Tanzania LNG developments put Tanzania in a very competitive sport across the continent and the world.

The project is slated to commence in 2025—once negotiations are successful, Tanzania eyes the project as among the top three flagship investments, placing Tanzania as a strategic, accessible and connected powerhouse.

“Although Tanzania has several strategic projects such as the Julius Nyerere Hydropower Station and the Standard Gauge Railway (SGR), which are four utilization, the LNG is very unique as it brings both capital and revenue”, President Samia Suluhu Hassan said during the signing ceremony of the HGA, quoted by The Citizen.

The Tanzanian President went further and stressed benefits trickling down to residents of the areas where the project is implemented. President Samia urged the project implementers to set up a component that empowers the locals throughout the resource extraction process.

According to Statista, Tanzania is one of the top ten countries with LNG export capacity. With the HGA on the table, Tanzania will soon join the ranks of Algeria and Nigeria with higher regional export capacity.

The HGA is a fruit of the April 29 agreement with exploration companies to construct a vast liquefied natural gas plant worth $30 billion.

The project is now on an active path, as the signing ceremony implies a start on Front End Engineering and Design, following which a Final Investment Decision (FID)—whereby if the decision is positive, the development would start (The Citizen).

Further, the HGA strictly stands on a fifty-fifty benefits scale, whereby the project is expected to cater long-term benefits to Tanzania and send a good message to investors across the globe.

Tanzania evolved over the past years and became attuned to the ins and outs of international oil and gas dealing and investment. Its reforms within the mining and investment sector correlate directly to current events.

The minister for Energy, January Makamba, noted before the President of Tanzania Samia Suluhu Hassan that Tanzania could be holding nearly 60 trillion cubic feet (TCF) of gas deposits.

This amount stands to transform the energy sector and put a dent in the economy as the nation becomes a competitive actor within the regional and global markets.

However, the minister revealed that the government of Tanzania is taking natural gas exploration to the next level.

According to information from The Citizen, for the financial year 2022/2023, Tanzania will enhance its natural gas exploration operations into 70 per cent of the unexplored area.

Tanzania is ambitious and strategic in transforming the natural gas sector to improve the economy. The exploration plan goes to increase investors’ confidence in Tanzania’s commitment to the sector and pump more life into the gas economy.

The Tanzanian energy minister argued that the nation has a total of 34 blocks, whereby 22 blocks are empty, only 12 are active, and operations are ongoing.

Further, the minister Makamba noted that Asian markets offer the highest gas price, accounting for over 70 per cent of new demand. According to The Citizen, Tanzania’s proximity to the said markets puts its gas at an advantage against competitors.

The energy producers pointed out that Tanzania’s LNG international markets could be worth around $4.3 billion based on 2021 markets. Further, the producers noted that LNG sales, taxes, royalties, and dividends would bring significant revenues to Tanzania, ultimately boosting economic development.

“This project will help bring Tanzania to the world map of most influential countries based on the use and need of energy globally, as the demand in the high-value markets of Asia is expected to increase, and since Tanzania is strategically located, it will be easier to reach the said markets,” The Tanzanian Minister of Energy said.

However, ExxonMobil—one of the world’s leading oil and gas companies, has anchored its investment attention in Tanzania. Operating as ExxonMobil Exploration and Production Tanzania Limited (EMEPTL), a fully-owned subsidiary of ExxonMobil, has a 35 per cent working interest in Block 2 Deepwater prospect offshore southern Tanzania.

So far, the global energy company has executed 22 exploration and appraisal wells drilled with over a 90 per cent success rate. The latter has made 16 trillion TCF of natural gas discovered, and the company has invested more than $2.5 billion.

However, on the other side of the aisle, the pathway to acquiring a solid foothold in the gas economy for Tanzania has been long and arduous even for investors such as Shell and ExxonMobil.

LNG in Tanzania shook in terms of investment when Equinor decided to write down the book value of its TLNG on the company’s balance sheet by $982 million–sending worries in the sector.

However, in April 2021, global energy companies in Tanzania, Equinor and Shell, urged the government of Tanzania to conclude negotiations on the LNG facility.

The LNG project stands to put Tanzania in a sweet spot to realize its industrialization ambition and become a gas economy standing out in the region.

In August, from the 3rd to 4th, Tanzania will host the 4th Tanzania Energy Congress to discuss matters on investment within the country’s oil and gas arena.

Jambojet partners with Cellulant to offer 600 frequent fliers with over $17,000 in rewards