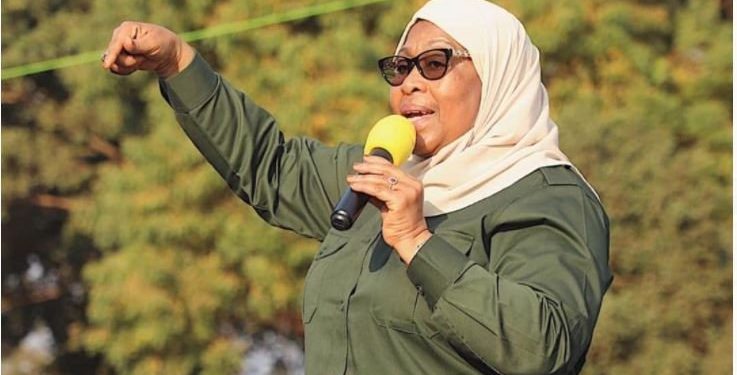 President Suluhu Hassan’s Royal Tour is yet another milestone executed to enhance tourism in Tanzania. The documentary titled, Tanzania: The Royal Tour, is a series of global television events hosted by Peter Greenberg with President Suluhu Hassan as his exceptional guide—who exposes the rich nature of her nation’s tourism via her leadership eye.

During the premiere of the documentary, President Suluhu Hassan took the liberty to assure millions of potential tourists once again that Tanzania is the best place to spend their vacation, “We are very friendly. You will never regret visiting,” she added.

President Suluhu Hassan, who visited the US for business and diplomatic intentions, is using the launch of the Royal Tour documentary to promote and improve the marketing of Tanzania’s tourism to the world.

The Royal Tour documentary is slated to be spread for viewing on multiple platforms in America—a strategic move to spread awareness and promote tourism digitally.

The documentary will be launched in Los Angeles next Thursday after it premiered on Monday, April 18, at the Guggenheim Museum in New York.

The documentary will be available for viewing across US states via the Public Broadcast Service (PBS) platforms over the next two to three months. Royal Tour documentary viewing is also available on Apple TV Plus and Amazon Prime from Friday 22.

During the launch, the Tanzania president provided detailed insights related to the nature and production of the vital documentary, which will be aired in Tanzania this month.

“Though it was difficult considering that I have so many guards who were telling me don’t do this, don’t do that, but I managed,” President Suluhu Hassan told Peter Greenberg, an American most recognized, honoured and respected front-line travel news journalist.

The Royal Tour documentary is yet another essential tool to expand Tanzania’s government’s reach to promote exotic tourist destinations such as Serengeti National Park, Mount Kilimanjaro and Ngorongoro Conservation Area.

Being the busiest politician in Tanzania, President Suluhu Hassan guided the filming process of the Royal Tour to the extent she had to miss lunch and dinner.

“You remember the day we did the voiceovers, we spent the whole day without lunch and then we had late dinner…you tortured me,” President Suluhu Hassan reminded Greenberg.

The sixth president of Tanzania unequivocally stated before the audience that came to witness the historical documentary that she had the guts to do the filming as she had so many people urging her otherwise.

President Suluhu Hassan, who saw the film with the audience, was awed by the documentary that took 14 to 15 hours per day to shoot.  The entire production was demanding, especially for the sixth president demanded to accomplish critical economic and diplomatic tasks.

” We were finishing around ten, eleven o’clock in the night, leaving at four, five in the morning,” Peter Greenberg added.

Ngorongoro Conservation Area and Serengeti National Park are Tanzania’s tourism jewels. They hold tourism in Tanzania to a higher marketing spot than any other, and filming in these locations was a significant move.

By 2020 at least 6 per cent of all tourists visiting Tanzania will have a US passport. Hence the Royal Tour documentary stands to inspire and motivate millions of US citizens to visit Tanzania’s exotic tourist hotspots.

The Royal Tour documentary is a crucial tool to sharpen the nation’s tourism industry, especially on weak angles that were hurt by the pandemic waves.

Tanzania’s tourism industry generated $1 billion in revenues in 2020 compared to at least $2.6 billion in 2019. The decline was attributed to the impacts of COVID-19, which affected the trend of international travel.

Tourism in Tanzania is essential to the national economy. In 2020 Tanzania’s tourism industry contributed 5.3 per cent to the nation’s GDP, a 10.7 per cent decline from 2019. The number of tourist arrivals in Tanzania declined by nearly 60 per cent (Statista).

In terms of numbers, Tanzania has seen high and low seasons in its most high earning foreign exchange sector.

Further, in the backend, the government of Tanzania is working to build the sector sustainably and shield the industry from other impacts.

The Ministry of Natural Resources of Tanzania has been furnished around $3.8 million, which is equivalent to 6.9 per cent of the whole International Monetary Fund (IMF) loan of more than $559 million in emergency financial assistance to support Tanzania’s efforts in combating the COVID-19 pandemic.