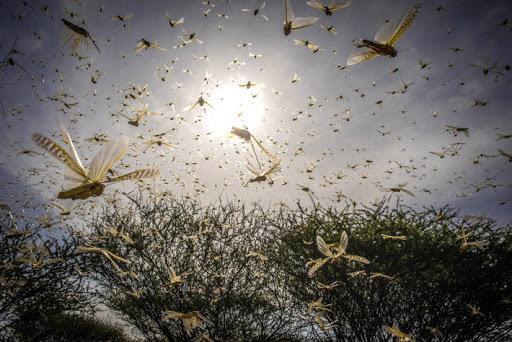 This is according to an analysis by Food and Agriculture Organisation (FAO) which also states that the decline is as a result of sustained control operations and delayed locust breeding due to limited rainfall.

by Kawira Mutisya
in Agribusiness, Industry and Trade
0
Share on FacebookShare on LinkedIn

The number and size of desert locust swarms in Ethiopia and Kenya has decreased significantly between January and March this year.   While this is indicative that good progress has been achieved, particularly in Kenya where swarms are no longer arriving from the north, the FAO still cautions that the situation in northern Somalia is still dire, given that the swarms and hopper bands invasion are still persistent.

This is according to an analysis by Food and Agriculture Organisation (FAO) which also states that the decline is as a result of sustained control operations and delayed locust breeding due to limited rainfall.

FAO had projected that if not contained, East Africa and Yemen would have sustained damages and losses of up to an estimated $8.5 billion by the end of 2020. Ethiopia was likely to be most affected, with potential losses valued at up to $2.8 billion. So far, locust control operations have prevented the loss of four million tonnes of cereal and 790 million litres of milk production, protecting the food security of 34.2 million people and forestalling losses estimated at $1.54 billion of cereal and milk.

Relief however, is that the climate is also unconducive for further breeding which means the battle is somewhat close to being over if control efforts are persistently applied.  According to an estimate projected by the US Agency for International Development (USAID), the expected below-average rainfall between March and mid-2021 will further limit locust breeding opportunities and curtail the size of new locust generations, possibly leading to a significant reduction in the current locust upsurge.

What this means for food security

The first wave of invasion was reported in 2019. However most of the food crops in that year had already reached maturity or been harvested.

When the global COVID-19 pandemic descended in March 2020, most governments took measures to contain it which included lockdown and social distancing. This affected several sectors including the agricultural sector.  Added to that, locust swarms have threatened the food supply of millions at a time when food is scarce due to the pandemic.

According to FAO Senior Desert locust forecaster, Keith Cressman, without rainfall, locusts will not mature and breed. The upcoming rainy season that is expected to be drier than normal should contribute to a further decline in locusts.

Farming, in Africa is heavily reliant on rainfall which brings with it concerns over food security.

“So, there is cautious optimism that the upsurge is winding down in the Horn of Africa, especially if poor rainfall limits breeding this spring, and then equally poor rains occur during the summer in northeast Ethiopia and Somalia,” said Mr. Cressman.

It has been a battle to slow down the locusts especially in the three countries that the swarms had dominated. In Kenya, Somalia and Ethiopia, response actors treated approximately 62,000 acres of land in January this year.

Use of pesticides have also been a source of contention with some players saying that some of these methods pose a threat to humans as well as food security given chemical residue in crops. But Mr. Cressman is quick to respond that managing desert locusts in order to prevent plagues is one of FAO’s original mandates since its founding in 1947.

“So we have deep experience in this challenging issue. Over the years, FAO and a range of partners working on desert locust management have developed standard operating protocols to guide the planning and execution of control campaigns.” He says.

“These are the recommendations we have been driving home from day one. It is widely accepted that the only effective strategy for responding to a desert locust upsurge of this magnitude is one that utilizes approved-for-use pesticides.” Mr. Cressman says.

“There is just no other way to do it, and the consequences of inaction in terms of the destruction to food crops and pastures in a region already beset by high levels of food insecurity are just unacceptable.”

The crisis is not over

According to Mr. Cressman, given the right conditions, desert locusts are a biological time bomb. They are also survivalists and know how to manage weather conditions in a changing climate.

“We have been surprised twice during this upsurge by atypical weather that dumped unusually heavy amounts of precipitation out of season and sparked an explosion of reproduction.” He says.

“It would be a fatal error to scale down the response now. On the contrary, surveillance missions should be ramped up, to lock in gains and detect any upticks in locust activity, if the weather does have any more tricks up its sleeve. The maximum number of ground teams must be out actively searching for locust infestations. All control teams must remain ready to react. If current trends continue, operations might be able to come off “high alert status” perhaps after the summer,” he adds.