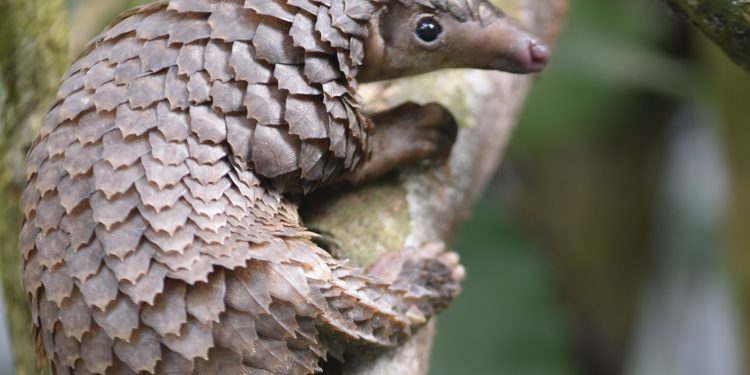 A Pangolin in the wild. Photo source Born Free Foundation

Just like COVID-19, other previous emergencies in the world like HIV, Ebola, Rift Valley fever, SARS can be directly traced to wildlife trade.

The COVID-19 has ravaged the world changing the lives of millions and devastating economies across
the world. With actual infections reaching over half a million people, the focus has now shifted to the
role trade in wildlife contributes to such epidemics.

Just like COVID-19, other previous emergencies in the world can be directly traced to wildlife trade.
From HIV, to Ebola, Rift Valley fever, SARS, pandemic influenza H1N1 2009, yellow fever, avian influenza
(H5N1) and (H7N9), West Nile virus and the Middle East respiratory syndrome coronavirus (MERS-CoV)
reported in the recent past.

World Health Organization (WHO) estimates that globally, about one billion cases of illnesses and
millions of deaths occur every year from zoonosis.

Some 60% of emerging infectious diseases that are
reported globally are zoonosis.

Over 30 new human pathogens have been detected in the last three
decades, 75% of which have originated in animals.

Zoonotic diseases are as old as the human race. Since human beings started experimenting with bush
meat, there have been numerous cases of diseases crossing over from the wild. The bubonic plague that
devastated Europe in middle-ages killing millions is one such case, which was caused by rats. The
Spanish flu of 1918 was also thought to have emanated from China and spread to other regions leaving
hundreds of thousands dead.

Read also: Trading in wildlife made easier?(Opens in a new browser tab)

Research has been able to determine the source of Coronavirus to a wildlife market in Wuhan, China,
commonly known as ‘wet markets’ where thousands of wildlife, some imported, are traded from as far as
Africa. This particular strain of the virus has been identified to have traveled from a bat, to a snake and
then to a pangolin. It was then that an infected pangolin found its way to the Wuhan wet market.

Pangolins are the world’s most trafficked mammal with poachers killing as many as 2.7 million
African pangolins every year. Although pangolins are a protected species in China, there is a thriving
black market for pangolin meat and especially for scales, which account for 20 percent of body weight.

According to Jacqueline Conciatore, an African Wildlife Foundation’s Writer and Editorial Manager, the
scales are in high demand for use in traditional Chinese medicine.

Pangolins prefers sandy soils and can be found in woodlands and savannas that are within reach of the water.
They are dispersed throughout Southern, Central, and East Africa. In Africa, large-scale trafficking is
driven by a belief that pangolin scales have magical and curative properties, and demand for their meat
is high. When mixed with bark from certain trees, the scales are thought to neutralize witchcraft and evil
spirits.

It is not just pangolins that are contributing to zoonotic diseases, especially in Africa. Bats are a major
source of viral infections that cross over to humans. The 2014-2016 outbreak of Ebola was traced to a
boy who, on noticing an army of bats around his home, went on to play with a dead bat. What followed
was a devastation of the economies and lives of a whole region.

The 2014–2016 outbreak in West Africa was the largest Ebola outbreak since the virus was first
discovered in 1976. The outbreak started in Guinea and then moved across land borders to Sierra Leone and Liberia. The current 2018-2019 outbreak in eastern DRC is highly complex, with insecurity adversely
affecting public health response activities.

Many African countries are riddled with open and known bushmeat markets where various species of
animals are traded for meat. Most of the animals in such markets are illegally captured and traded and
there are little health inspections to check against the spread of zoonotic diseases.

Edith Kabesiime, Campaigns Manager at World Animal Protection – Africa, says, “With the recent
coronavirus outbreak, we are also starting to realize that the economic and human cost of an outbreak
due to the demand for exotic animals is a price not worth paying. The international trade of African Ball
python is an important source of economic income for some local communities, but when the snakes
are all gone, the money will be too”.

China banned the consumption of land-based wild animals due to COVID-19 and late last week Vietnam
followed suit. While this is a great first step, other wild animals used for non-edible purposes, such as
exotic pets and traditional medicine are so far not included.

A permanent ban on all wildlife trade is the only long-term solution which will help to prevent major
health epidemics from happening again and eventually save African wildlife.

A report by World Animal Protection is sounding the alarm over the international trade of this reptile
and also calling for a stop on the global wildlife trade, which is a ticking time bomb for infectious and
deadly diseases. Wild animals, poached from their natural habitat or bred in captivity, are typically
placed in cramped cages under dirty conditions, creating a lethal hotbed of disease. This also causes
them enormous suffering.

“The trade of Ball pythons as exotic pets is a massive global market that has impacted and depleted
millions of animals in Africa over the last several decades. These animals suffer cruelly from capture,
throughout to a life of captivity,” says Ms. Kabesiime.

In Africa, wildlife crime is growing and threatens significant ecological, cultural, and economic assets.
The elephant population—a critical draw for the tourism sector—has declined by 30 percent since 2007.
Two elephants are poached each and every hour, and over 1,000 rangers have been murdered in pursuit
of poachers in the same time-frame.

According to the World Bank, this tragedy results in natural and human losses, instability and violence,
but also in lost jobs and lost GDP. Wildlife crime undermines rural economies and privileges in the
pursuit of private, criminal profit at the expense of communities that rely on nature for their food,
shelter, start-up capital, and safety net in a warming world.

With a value of between $7 billion and $23 billion each year, illegal wildlife trafficking is the fourth most
lucrative global crime after drugs, humans and arms. Trophy hunting is estimated to create around $200
million in annual revenue. Only 3% of the fees paid for the hunts reach local communities.