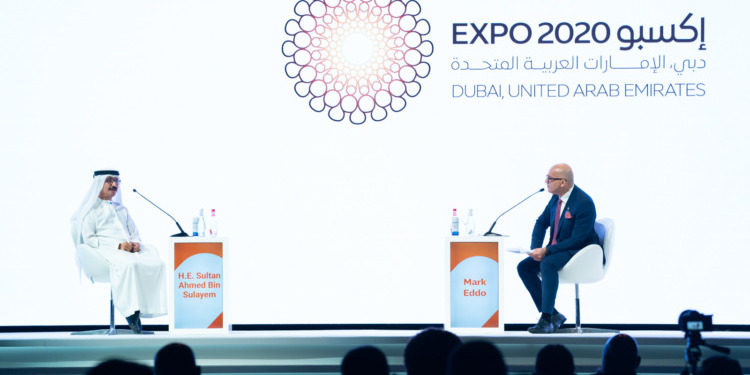 According to H.E Sultan Bin Sulayem Dubai is confident on maintaining a better relationship with the African continent calling for transparency, governance and sustainable infrastructure that will motivate the private sector to spur economic growth through investments.

H.E. Sultan Bin Sulayem, the Group Chairman and CEO of DP World Group speech at the Expo 2020 resonates with the Chinese proverbial saying the best time to plant a tree was 20 years ago and the second-best time is now- contextually put this when he offered insights on what Africa potentially can provide as far as investment and areas of partnership are concerned.

Speaking during a session titled Partnerships for Prosperity, at the Global Business Forum Africa in Dubai, which sought to give information on Dubai and Africa trade ties H.E Sultan Bin Sulayem said Africa’s growth prospects which are among the highest in the world according to IMF has greater comparative advantage to create clear investment opportunities for foreign businesses even as he gave best ways of expanding cooperation between Africa and United Arab Emirates [UAE].

H.E Sultan Bin Sulayem says in order for the two parties to achieve a common goal towards prosperity an objective mechanism ought to be developed which requires African countries to work in providing opportunities for business success by enacting legislation, policies and laws, in addition to providing logistical services, finance and infrastructure to enable African countries to attract major investments.

The Group Chairman and CEO of DP World Group also did not reserve his comments on the work of ports which serves as important transportation hubs and key drivers to economic growth.

He says that their status should be judged along with the significant role they play in driving the economy in their respective nations such as providing employment to the local community and their ability to attract foreign investors, giving a case study of Dubai’s ports, which contribute significantly to the UAE’s GDP and create many job opportunities on top of being gateways to markets around the world.

“The important thing is to use ports to support the continuous development of business and the search for innovative ideas that contribute to the transition to a new era of recovery and prosperity. Dubai is constantly seeking to build partnerships and has important experience in expanding in Africa. It seeks to transfer its wealth of experience to help develop business in Africa and to contribute effectively to achieving economic growth in the continent’s countries. Dubai is committed to expanding its presence in Africa because of all the ingredients it possesses that stimulate the building of sustainable companies,” he said.

According to H.E Sultan Bin Sulayem Dubai is confident on maintaining a better relationship with the African continent calling for transparency, governance and sustainable infrastructure that will motivate the private sector to spur economic growth through investments.

In addition, he says Africa nations should provide a working system in supply chains as well as reducing the cost of transportation to achieve economic growth as a transportation investment might shift jobs, not just across industries and sectors, but also across countries and other world nations.

With the Covid-19 pandemic that ravaged the world’s economy with African nations not exempted, H.E. Bin Sulayem says the supply chains were exposed during the last period to unprecedented challenges and there were significant restrictions to their operations.

“We have seen that they are highly affected by global crises and we need to find proactive solutions to address this.” He said.

Commenting on the Africa’s growing, youthful population, amidst an aging population in most regions, Bin Sulayem says this constitutes a formidable market in future and that their capabilities must be developed.

He says the United Arab Emirates is carrying out programmes aimed at educating the youthful population and involving them step by step to establish their capabilities as it is their part of societal responsibility in Africa.

“In the coming months, Dubai Ports will reach about 100,000 young people in Africa with specific programmes to qualify them to be active in contributing to business development and to growing the economies of their countries,” he added.

The two-day event which started yesterday on the sidelines of Expo 2020 Dubai bears the theme Transformation Through Trade, and is aimed at setting the stage for significant post-pandemic trade and commerce between Dubai and Africa in a post-pandemic world.