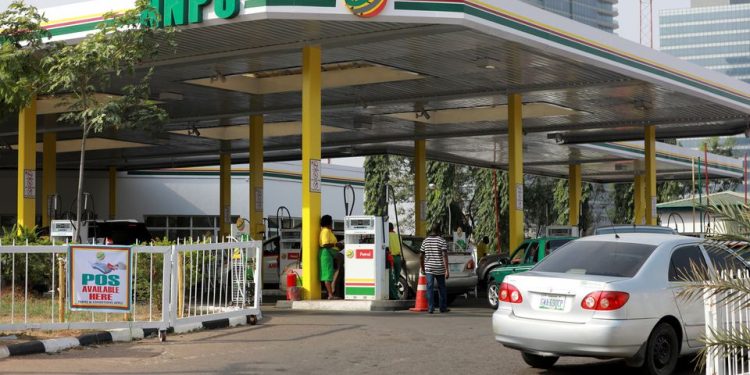 Motorist queue to buy petrol at the NNPC petrol station in Nigeria, [Photo/REUTERS]

The government-owned Nigerian National Petroleum Corp will be ready to conduct an initial public offering (IPO) in mid-2023, according to the company’s group CEO, Mr Mele Kyari who made the announcement on Tuesday, the same day the firm became an official commercial company, new NNPC Ltd.

On Tuesday at noon in Abuja, Nigerian President Muhammadu Buhari announced the launch of NNPC Limited (NNPCL), bringing a new commercial behemoth into the city.
The new corporation represents a significant change from the state-controlled petroleum products organisation founded in 1977.
As a result of the NNPC’s transition into an entirely commercial entity, the federal government will immediately stop providing any form of funding for the corporation’s projects.

We are convinced that by June 2023, this company will be IPO-ready to enhance its capital base. We have processes, the system, and a company accountable to its shareholders and stakeholders .

Because it will now be a private company, NNPC Ltd will no longer be able to access public financing. Both the Ministry of Petroleum and the Ministry of Finance currently hold the shares and assets of the company, which include oil blocs and refineries.
Even though NNPC Ltd participates in joint production projects with Western oil majors, anti-corruption activists have for a long time demanded that the company be more open and transparent. Specifically, they want the company to publish a statement of its accounts as well as its crude contracts.

He added that the new NNPCL would “be one of the most competently run enterprises internationally” because it would have an initial capital outlay of N200 billion as well as initial debt finance of $5 billion.

Kyari disclosed that the Dangote refinery’s boilers will be fired up in the 2023 first quarter, a development that will assist Nigeria’s “foreign exchange supply problem.”

He went on to say that despite the fact that the NNPCL was still going to be primarily owned by the federation even though it was still in its infancy, the new company will no longer require the approval of either the National Assembly or the executive to borrow money or look for financing for projects.

There is room for unaffiliated third parties to purchase ownership in this business. But as we speak right now, there are more than 200 million Nigerians who are stockholders.

There is a possibility for a second level of privately held ownership, and one way to achieve this would be to sell off part of these shares of equity. This would allow individuals, rather than the nation as a whole, to acquire ownership of the company.

Therefore, it is inevitable that every single one of these adjustments will take place. Before you can even begin to discuss the possibility of selling down interest in the firm, it has to be IPO-ready, as Kyari noted.

We’re already on the positive trend, and by the middle of next year, I’m very, very confident that this company will be in a place to say we’re ready for IPO, and the nation will decide to go private entirely in the sense that we can now sell their equity, which is distinct from being owned by the majority of Nigerians. He elaborated.

Earlier on Tuesday, Deputy Minister of Petroleum Timpire Sylva stated that the Nigerian National Petroleum Corporation (NNPC) would function as a profitable corporation that will distribute dividends.

For the first time, the Nigerian National Petroleum Corporation (NNPC) Limited has raised the price of gasoline at the pump in several sections of the country.

This serves as a preview of what is to come in the near future. The hike was included in a notice sent to fuel distributors with an effective date of Tuesday, July 19th.

In Lagos, gasoline would cost N169, whilst in Abuja, it will cost N174.
Gasoline prices in the South West, South-South, and North Central regions are N179.
The price in the South East and North West increases to N184, while the North East has the highest price at N189.