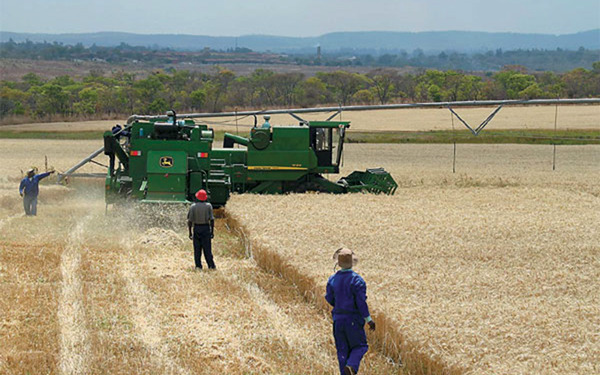 According to official statistics Zimbabwe has started reaping the benefits of a stellar agricultural season after cereal imports, including maize, dropped to 1,9 percent in the five months to May 2021 from 9,1 percent in January.

Statistics from May’s trade report released by the Zimbabwe National Statistical Agency (Zimstat) show that maize output for this season is projected at a record 2,7 million tonnes, about 193,1 percent up from 0,9 million tonnes produced in last season.

The maize output will be complemented by increases in the output of other grains, including sorghum, pear millet and finger millet, a situation that has led to low grain imports, especially after outright ban of maize shipments by the Government.

In Mid-May Zimbabwe suspended maize imports after the country recorded a bumper maize harvest, this was according to Reserve Bank of Zimbabwe Governor John Mangudya who said in a press conference, saying that the suspension would result in the country saving over 300 million U.S. dollars. Due to perennial droughts, Zimbabwe has been importing an average of 100,000 tonnes of maize per month from the region and as far as South America.

Consequently, the bumper harvest achieved this year after the good rains received across the country will anchor low food and overall inflation decline, according to recent pronouncements by the Reserve Bank of Zimbabwe (RBZ).

Central bank chief Dr John Mangudya is on record saying, due to the good harvest this year the country will save hundreds of millions of US dollars that were being spent on importing cereals, particularly maize and wheat, which would now be channeled towards productive sectors.

This level of output surpasses the national cereal requirement of an estimated 1,8 million tonnes and 450 000 tonnes for human and livestock consumption, respectively.

It is anticipated that about 1,9 million tons of grain, valued at $67,7 billion (Zimbabwe dollars), will be delivered to the Grain Marketing Board (GMB) by the farmers country wide

Despite the ravaging covid-19 that has halted a lot of activities and hampered economy growth in most Africa countries, Finance and Economic Development minister Mthuli Ncube says that, given agriculture’s strategic position in the domestic economy, agriculture will drive projected growth of 7,8 percent this year.

Growth of the agriculture sector in 2021 was revised upwards, in the mid-term fiscal policy delivered last month, on account of higher-than expected performance of almost all crops particularly maize, groundnuts, and sorghum.

The sector, which contributes about 16 percent to Zimbabwe’s Gross Domestic Product (GDP), is estimated to grow by 34 percent, up from the original Budget projection of 11 percent.

Zimbabwe’s major imports in May 2021 were machinery and mechanical appliances, which stood at 15,5 percent .

This was followed by mineral fuels, mineral oils product category at 12,6 percent in May up from 10,6 percent in April 2021.

Other major imports in May 2021 included animal and vegetable fats (4,2 percent), plastics and articles (4,4 percent), fertilizers (3,5 percent) and pharmaceutical products including vaccines (3,7 percent).

Notably, the major imports in Zimbabwe were aggregated to reach 90,3 percent in May 2021.

It was noted that major minerals produced in the country such as nickel concentrates, and nickel mattes were exported in a semi processed form while nickel ores (including PGMs) are exported in a raw form.

South Africa is Zimbabwe’s major trading partner. However, exports to South Africa declined from a peak of 61,2 percent in November 2020 to 39,7 percent in April 2021 before increasing to 53,3 percent in May 2021.

Exports to the United Arab Emirates, Zimbabwe’s second largest trading partner, dropped to 18,7 percent in May 2021 from 25,5 percent in April 2021.

Kenya's imports from Tanzania grow by 75pc in June