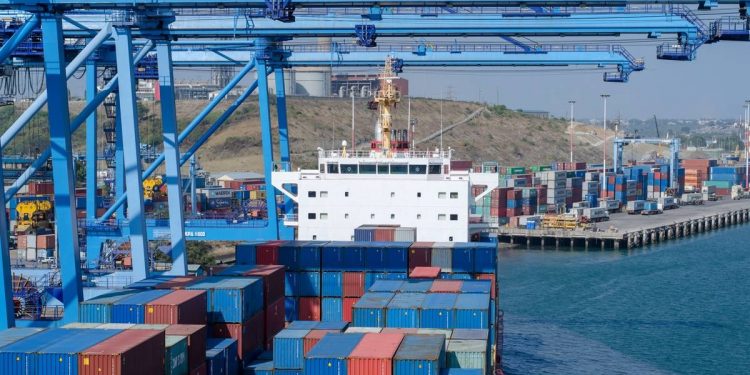 The Port of Mombasa. Africa’s blue economy has the potential to transform the continent’s economy. [Photo/Maritime Logistics Professional]

Over 90 per cent of Africa’s imports and exports are transported by sea which makes the continent a strategic gateway for both regional and international trade.

Water transport is one of the key pillars of the continent’s blue economy whose estimated value is US$1 trillion per year. Overall, the asset value of Africa’s ocean economy ecosystems is around US$24 trillion.

The continent whose population growth is outpacing the rest of the world is suffering from an unemployment crisis which, if left unaddressed, could explode into a catastrophe since a majority of the population on the continent are youth.

As a way of addressing this crisis, the blue economy has unique potential of creating jobs that can sustain livelihoods for local communities while offering low-cost impactful climate change adaptation solutions on the continent.

Africa’s blue economy has been hailed as the ‘new frontier of African renaissance’ due to the maritime industry’s huge economic potential across the continent. The significant economic opportunities in the blue economy on the continent include seabed mining, fisheries, oil drilling, trade, aquaculture and tourism whose potential can drastically transform Africa’s future.

The African Union (AU) highlights that thirty-eight of Africa’s 54 states are coastal, and maritime zones under Africa’s jurisdiction.

This is no small business for the continent when well utilised. According to the AU, the blue economy encompasses all activities developing or deriving from marine and aquatic ecosystems including oceans, coasts, seas, rivers, lakes and groundwater, and associated resources.

Seleman Yusuph Kitenge, writing for the AU notes that with the vast ocean and lake resources at its front door, African countries have a huge opportunity to diversify their economies and address the risks of relying on specific economic sectors which limit their chances to promote socio-economic development.  He says that such economic diversification if planned and managed in an equitable and sustainable way to grow the blue economy, will help to mitigate the risk posed by the increased vulnerability of external shocks from the global economic system that can inhibit longer-term economic prosperity in the continent.

Kitenge adds that with the vast ocean and lake resources at its front door, African countries have a huge opportunity to diversify their economies and address the risks of relying on specific economic sectors which limit their chances to promote socio-economic development.

“Such economic diversification, if planned and managed in an equitable and sustainable way to grow the blue economy, will help to mitigate the risk posed by the increased vulnerability of external shocks from the global economic system that can inhibit longer-term economic prosperity in the continent,” he adds.

The African Union’s 2050 Africa’s Integrated Maritime Strategy, AU Africa Blue Economy Strategy (2019), and other related continental and regional frameworks show that policymakers and decision-makers now recognise the opportunities the blue economy offers as part of a bigger economic picture towards economic wellbeing of the continent.

Governments have a huge opportunity to create new sources of revenue that may contribute to the implementation of development plans and reduce donor dependency on national budgets once they fully implement the blue economy policies.

Despite the resources Africa can boast of, the continent still suffers from large-scale poverty where more than 46 per cent of the population is living in extreme poverty. This situation has been exacerbated by the Covid-19 pandemic which has rendered many people jobless and without livelihoods.

By tapping into the wealth potential offered by investing in the blue economy sectors, the continent can benefit immensely from the youthful population which can help grow broad-based social progress and structural transformation of the continent’s economy.

Africa’s maritime industry covering 38 coastal countries and six islands is estimated to be worth US$1 trillion per year. With exploitation in the sector, this figure is expected to grow as countries develop their tourism, offshore hydrocarbon, maritime transport, energy, shipping and fishing sectors.

Countries that are primed to benefit the most from their blue economy investments in Africa include Madagascar which has a 5,500-kilometre coastline. The country’s potential to benefit from the blue economy is huge following the identification of this potential by the Malagasy government in 2015. The country then set out on setting out clearly defined blue-economy principles which could be the way to jumpstart economic development in the country.

Madagascar has invested heavily in shrimp fisheries in the West to deep-sea ports, mining and container shipping in the East and South East. The country’s potential in the blue economy has attracted Chinese investment for projects ranging from shipyards to fisheries and aquaculture.

Somalia is another economy that boasts approximately 3,000 kilometres of coastline. Its ocean territory stretches around 120 kilometres offshore and with monsoon winds enriching Somali waters with nutrients and food, the country’s ocean resource is munificent.

With piracy subdued, Somalia’s potential in a booming ocean economy has as many foreign vessels, from industrial longliners to rillnetters coming back to the rich Somali waters.

To the south of Somalia, Kenya has an expansive 200,000-nautical-mile exclusive economic zone (EEZ). This belt expanse is rich in tuna and the East African nation also boasts sizeable inland blue-forest habitats such as mangrove forests which are good for carbon credits.

South Africa and Nigeria are the other countries whose blue economies could turn around their fortunes.

For South Africa, aquaculture, marine transport and manufacturing, offshore oil and gas and marine protection are some of the key areas that the country is targeting. South Africa has a coastline extending almost 4,000 kilometres long and it has the potential to add £9.6 billion (R177 billion) to the country’s GDP while creating more than one million jobs by 2033.

Nigeria is the world’s 16th-largest oil producer and this sector dominates the country’s shipping industry. Thus, the country has an enormous potential in shipbuilding and repair yards which could provide employment for millions.

Since Nigeria lacks investment in shipbuilding and repairs, Africa’s largest economy has had to look elsewhere for these services. By investing in the sector, the country could stop haemorrhaging capital and lost labour to foreign nations.

Read: Why Kenya will reap big from the blue economy