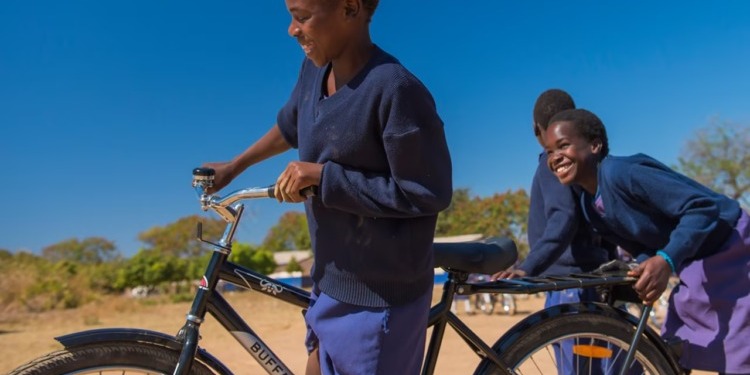 Girls learning how to ride a bike. Rural communities in Africa are especially badly hit by transport challenges. [Photo/worldbicyclerelief.org]

Globally, transport is one of the biggest contributors to pollution.

The world today is at a crossroads dealing with numerous crises including the decades-long climate crisis which has led to unprecedented biodiversity loss and rising inequalities among other challenges.

In 2019, the Covid-19 pandemic struck knocking everything off balance.

It is against this backdrop that the UN climate change conference (COP26) is taking place in Glasgow, Scotland.

As the world is resurging from the negative economic effects of the pandemic, the COP was a good place, and in good time, to help the world reset when it comes to matters climate change. One of the biggest casualties of the pandemic was transport which badly affected value chains as logistics became impossible.

Globally, transport is one of the biggest contributors to pollution. To address this challenge, the world has slowly been making positive steps towards making non-motorised transport chic in a bid to cut down on emissions. In Africa, this is yet to be adopted on large scale.

More often than not, governments like Kenya have been on the receiving end of citizens pushing for pedestrian-friendly roads with clearly marked cycle lanes. This is yet to happen and the authorities mandated with road designs like the Kenya National Highways Authority (KeNHa) have prioritised designs that favour motorised transport.

However, this may change if investments in the transport sector prioritise non-motorised means.

The United States Agency for International Development (USAID) may be leading the way albeit from the rural areas. The American agency has allocated US$3.5 million to the Bicycles for Growth Initiative. This is a programme that aims to improve sustainable access to affordable bicycles in sub-Saharan Africa.

J.E. Austin Associates and World Bicycle Relief are working with USAID support to increase mobility in rural areas in sub-Saharan Africa through the development of means to rapidly increase bicycle uptake for individuals without access to other transportation or those who cannot afford one.

By so doing, the target is to facilitate the opportunity for higher incomes, better health and education outcomes.

The reality is that many sub-Saharan Africa communities struggle to access economic opportunities, health services, education and basic social services due to long distances and limited transportation options. Rural communities are especially badly hit by these challenges.

For these communities, walking is the main mode of transportation and bicycles are an option that can provide a reliable, accessible, affordable and efficient alternative to walking. They also provide more carrying capacity and easier access to necessary destinations.

Estimates show that more than 70 per cent of sub-Saharan Africa’s rural residents traverse long distances to work, travel to school, transport goods to market or seek medical care. These distances are usually without access to roads or transportation.

The USAID funding will support research on the demand, supply and support systems in accessing bicycles in Ghana, Malawi, Rwanda, Uganda and Zambia.

Results of the assessment phase will help the teams implement pilot projects in two of these countries. The four to six localities chosen will help with the goal of reducing barriers to increased supply and uptake of the low-cost, durable and adjustable bicycles.

Bikes for rural sub-Saharan Africa is a first since many of the plans are concentrated in urban cities worldwide.

The UN published the Global Report on walking and cycling in 2016 which showed that in Chinese cities, up to 60 per cent of city trips are made by bike. In African cities, the share was close to 5 per cent. The report noted that in Malawi, a majority of rural road users were cyclists at an estimated 80 to 90 per cent.

Still, in 2016, the Netherlands Travel Survey reported that a total of 15.5 billion kilometres were covered in 4.5 billion bicycle trips.

Savings made by switching to cycling

Making a case for switching to cycling, the UN report indicates that 150g of CO2 per kilometre is saved just by switching from a car to a bicycle.

For each 7km covered by bicycle, it will save an emission of 1 kilogram of CO2 in comparison to the same distance covered by a car. In a five-year period, the report notes that the Dutch avoided 1.41 million tonnes of CO2 each year through cycling.

This saving was the equivalent of planting 54.4 million trees each year. If cycling in Stone Town, Zanzibar then, the savings were estimated at 1,062.4 tonnes of CO2 per year, which corresponds to US$20,994, if these savings were to be traded on the carbon markets. This amount was approximately equivalent to 10 times the average income in Zanzibar.

Cycling affords cyclists to save since it is a cheap mode of transport.

In Europe, cyclists make annual costs savings of between US$200 to US$340. On the other hand, the costs of driving a car range from US$2,800 to US$9,600 every year, based on average annual mileage.

Cycling is also good for the infrastructure since the costs per traveller are reduced. A report by the Dutch Ministry of infrastructure and water management in 2018 indicated that the annual infrastructure costs for bicycle users were US$0.03 per traveller, per kilometre while it was US$0.11 for cars, US$0.16 for buses and US$0.20 for trains.

With these figures, Africa which suffers the most from the effects of climate change could benefit from transport infrastructure which prioritises non-motorised transport. Unless this is done, vulnerable communities, groups and individuals will continue suffering from the dynamics of marginalisation and exclusion in the transport sector.

Decisions taken by leaders in this year’s COP will guide international and national efforts to address these challenges over the coming decade for climate, nature and people.

The world, and Africa especially, needs urgent and strong action to address these interconnected crises. This means that decision-makers and major moments this year should leverage pandemic recovery packages that drive cohesive climate,  nature and development outcomes.

2021 is the year that dealing with the climate emergency, rising inequalities and the unprecedented biodiversity loss with the Covid-19 pandemic should have Africa as the main agenda.