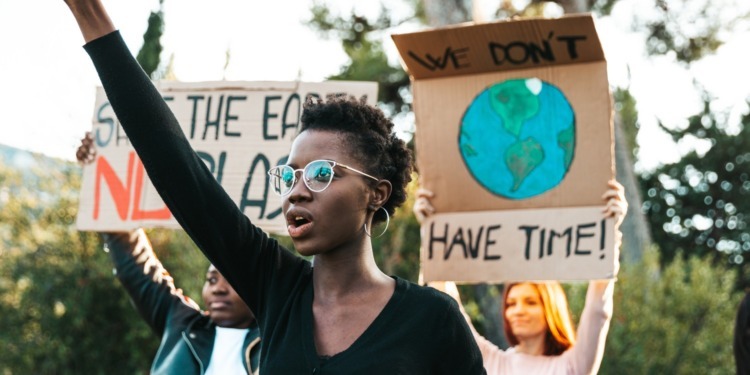 Demonstrations before the COP26 opening. Africa is suffering the brunt of climate change. [Photo/ FutureLearn]

Kenya has been at the forefront of developing and implementing measures to combat climate change evidenced by the promulgation of the Climate Change Act No.11 of 2016.

Africa has been rife with a plethora of horrific manifestations emanating from the deleterious shocks of climate change.  In a somewhat bizarre twist of fate the continent continues to bear the brunt of numerous climate-induced natural disasters, yet it only contributes a paltry 4% of global total greenhouse gas (GHG) emissions which is the lowest by any region. From the plague of desert locusts that continue to ambush the Horn of Africa, tropical storms, floods across Eastern and Central Africa, severe droughts and heat waves to massive cyclones whose devastating effects are still felt across Southern Africa they have been a harbinger of the doom to come should the climate change crisis lack urgent and proper redress. According to the Intergovernmental Panel on Climate Change (IPCC), the world is getting hotter with the past decade being the hottest on record since 1850 and future trajectories of the continent indicate that large parts of Africa may become inhabitable.

The forthcoming twenty-sixth session of the Conference of the Parties (COP26) to be hosted by the United Kingdom in partnership with Italy spearheaded by the United Nations Framework Convention on Climate Change (UNFCCC), is a pivotal platform to galvanize efforts by world leaders of major economies to accelerate action towards goals of the 2015 Paris Agreement. In a span of the twelve days scheduled for the summit in Glasgow this November, a binding obligation will be formulated, coupled with the adoption of effective strategies to tackle the global climate agenda with Africa at the epicenter.

Agenda 2063: The Africa We want initiated by the African Union (AU) highlights that one of its key goals, is the achievement of environmentally sustainable and climate resilient economies and communities. By the same token its key priority areas under this goal are climate resilience and natural disaster preparedness, coupled with conservation and sustainable natural resources management. This is directly interlinked to the United Nations Sustainable Development Goals (SDGs) on ensuring access to affordable, reliable, sustainable and modern energy for all (7) and taking urgent action to combat climate change and its impacts (13) respectively. In addition, blue economy for accelerated economic growth is another goal under the agenda, with the priority goal of tapping into marine resources and energy.  Again this corresponds with goal 14 of the SDGs on conserving and sustainably using oceans, seas and marine resources for sustainable development.

Tracking the Progress of Africa and the 2015 Paris Agreement

Taking into account the projected outcomes for Africa in Glasgow this November, it is essential to track the progress and action points thereof, of the Paris Agreement adoption by African governments, as it will set premise at the COP26. Countries such as South Africa, Kenya, Angola, Ghana, Gambia and the Democratic Republic of Congo (DRC) developed and implemented laws, policies and mechanisms towards the undertakings under the 2015 Paris Agreement. South Africa ratified the Paris Agreement in late 2016 and indicated its commitment to follow a peak-plateau-decline (PPD) trajectory. In March this year, the country published an updated draft of its Nationally Determined Contributions (NDCs), declaring that it intends to commit to net-zero carbon emissions by 2050, through limiting absolute emissions levels.

Kenya has been at the forefront of developing and implementing measures to combat climate change evidenced by the promulgation of the Climate Change Act No.11 of 2016 which provides a regulatory framework for enhanced responses to climate change, as well as mechanisms and measures to achieve low carbon climate development. The country also submitted its first NDCs which indicated that the country would reduce GHG emissions by 32 per cent by 2030.

Angola boasts some of the most ambitious targets for transition to low carbon development in Africa, albeit having ratified the Paris Agreement in November 2020. Since then the country has launched a national development plan, established a climate observatory and implemented a continuous national emissions monitoring system.

In addition, Gambia is committed to reducing its GHG emissions unconditionally, by 2.4 per cent by 2025 having implemented the Sustainable Energy Action Plan in 2015, which sets out the country’s renewable energy targets and corresponding measures necessary for their achievement. It has also committed to terminating oil importation by 2025. Between 2020 and 2030, Ghana proposes to implement twenty mitigation and eleven adaptation programmes. The Democratic Republic of Congo (DRC) NDCs, commit the country to a 17 per cent reduction rate by 2030.

In cognizance of the immense potential of Africa’s clean energy adoption, commitment to the green energy transition by African countries is becoming fortified by the day; with more governments embracing green energy solutions and formulating policies thereof, to back their implementation. Combating climate change by mitigating GHG emissions, with green energy alternatives will be thoroughly discussed at the COP26 Summit; because clean energy is the only route to catapult the continent into a sustainable era for a brighter and greener future. Clean energy adoption also means tapping into hydropower, solar and wind energy coupled with various types of biomass which provide electricity without depleting the earth’s limited resources.

Projections by the International Renewable Energy Agency (IRENA), the intergovernmental organization mandated to promote sustainable use of renewable energy, indicate that with the right policies, regulations, governance and access to financial markets, sub-Saharan Africa could meet up to 67 per cent of its energy needs by 2030. Similarly, the Renewable Energy Solutions for Africa (RES4Africa) Foundation has been playing an integral role of incentivizing dialogue between governments and private players along the renewable sector value chains, with a mission to work towards creating favourable conditions for scaling up investments in clean energy technologies in Africa, with Africa and for Africa. Renewable energy in Africa is set to surge and make up almost half of power generation growth in the sub-Saharan parts of the continent by 2040.

Countries like South Africa, Egypt, Ethiopia, Kenya and Morocco have exhibited a firm commitment towards accelerated use of modern renewable energy. For instance, solar energy markets in the continent have been soaring experiencing a growth of over 1.8W of new solar installations largely driven by five countries: Kenya, Egypt, South Africa, Ghana and Namibia. Similarly, the world’s largest concentrated solar power farm, Noor Quartzazate Solar Power Station in Morocco has helped a third of the country’s electricity to be renewable. Into the bargain Africa’s smaller countries like Djibouti, Rwanda, Eswatini and Cape Verde have also set ambitious renewable energy targets.

Projected Outcomes for Africa at COP 26

In April, US President Joe Biden convened a Leaders Summit on Climate that included five African Heads of State:  President Uhuru Kenyatta of Kenya, Muhammadu Buhari of Nigeria, Cyril Ramaphosa of South Africa, Ali Bongo Ondimba of Gabon and Félix Tshisekedi of the Democratic Republic of Congo. The recommendations that came to fore at the Summit included expectations for developed countries to lead with defined targets for reaching net-zero emissions by 2050 and that they should mobilize sufficient finance resources and transfer environmentally sound technologies, as aligned under Article 4 of the UNFCCC on commitments and obligations.

A key area that will warrant exhaustive discussions at the COP26 is the climate finance agenda, whereby an effective finance infrastructure must be established and agreed upon, on long-term climate finance (LTF) under the UNFCCC. The African Group of Negotiators intends to echo African leaders, in maintaining that COP26 will only be fruitful if Africa is at the heart of the negotiations. By the same token, the negotiators must be in cognizance of the fact that the conditional parts of the NDCs represent the most ambitious contributions to the Paris Agreement on climate change which require climate finance resources that should be availed through bilateral and multilateral channels. Into the bargain, Africa undoubtedly needs additional support for its initiatives, pertinently the African Renewable Energy Initiative (AREI) and the African Adaptation Initiative (AAI). As opposed to loans, Africa needs grants to curb the rising debt which coupled with the pandemic, has crippled developing countries from tackling the climate crisis in full throttle.

In May, the Allied for Climate Transformation by 2025 (ACT 2025) consortium, which includes local and global organizations based in Africa, Asia, the Caribbean and Latin America, published five outcomes it anticipates from COP26.These include more ambitious national climate targets from developed countries in line with the Paris Agreement on the 1.5 degree reduction target ahead of 2025, upon which shall be submitted to the UN; scaled up and accessible finance for vulnerable countries including sovereign debt relief where the money will be redirected to green projects; increased support for adaptation efforts, including methodologies and metrics to measure progress; increased action and support for loss and damage due to climate impacts where adaptation is not possible; finalized rules and architecture under the Paris Agreement including the Paris Rulebook implementation guidelines, carbon market mechanisms under article 6, securing a clear common end date for countries’ emissions reduction targets and the first global climate ‘stock take’.

As Africa looks towards COP26, the continent anticipates positive outcomes.