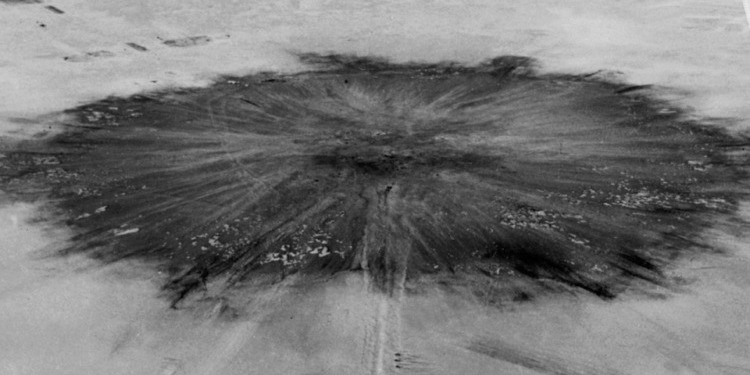 The site of Gerboise Bleue, the first French nuclear bomb test, on Feb. 20, 1960, a week after detonation.AFP- Getty Images

It is almost inconceivable and rather far-fetched to associate Africa with  nuclear proliferation, yet ahead of the forthcoming International Day against Nuclear Tests observed annually on the 29th of August, it is imperative to not only commemorate the history of the continent’s brush with nuclear tests, whose effects have ironically recently surfaced on a higher magnitude in another continent, but also to formulate feasible strategies for the continent to tap into and harness nuclear power as a viable option to meeting the gaping energy deficits to drive industrialization and economic transformation.

Africa’s dark colonial past comes calling back with the recent occurrence of massive clouds of radioactive dust making a return on French soil, emanating from the Sahara Desert where nuclear colonial heirlooms buried decades ago continue to be unearthed by the day. The event stirs up a cauldron of repressed haunting memories that best remain buried in history books; as the deleterious effects of what happened in Algeria, meted out by its colonial master, France, continue to reverberate to this day.

Over half a century later, the Sahara still evokes the atrocities committed in gusts of seasonal winds full of radiation that have been blowing back nuclear relics to the perpetrator, in form of radioactive dust and particles as if cleansing the desert and restoring it to its former uncontaminated state. Perhaps to remind the perpetrator to return to the scene of the crime and finally do its due diligence in compensating the afflicted who hitherto experience cancers, blindness and birth defects. Despite the existence of a compensation scheme, very few victims have been aided, with some having died during the long wait.

In February 2021, dust and sand particles from the Sahara blanketed skies over Europe, which was visible to the naked eye in the skies across parts of the continent. Dust plumes from the desert caused red skies which limited visibility and affected air quality. The European Union’s Copernicus satellite monitoring service reported the dust carried high concentrations estimated to be ‘several hundred times’ more than normal, given that the arrival of dust plumes from the Sahara is common in Europe. The World Meteorological Organization (WMO) estimates that between 1 billion and 3 billion tonnes of particles are thrown into the planet’s atmosphere every year. Of this, 500 million to 1 billion come from the Sahara. According to epidemiological studies carried out by the World Health Organization (WHO), there is evidence of an acute risk of cardiovascular mortality due to respiratory problems, coupled with childhood asthma. Studies have further indicated that the particles could be contaminated with dangerous heavy metals, phthalates, pesticides and pollen on their journey. The Association for the Control of Radioactivity in the West (ACRO) detected the presence of a radioactive component in the dust; abnormal levels of cesium 137, a nuclear fission byproduct given off by the French Gerboise Blue explosions in dust samples collected. However, ongoing studies by WHO projects to release a report by the end of the year shedding light into the long-term effects. March 2020 marked 50 years since the establishment of the Nuclear Non-Proliferation Treaty (NPT) which was founded upon the pillars of nuclear disarmament, nuclear non-proliferation and peaceful use of nuclear technology, with the key objective of fostering peace and security.

On 13 February, 1960, France conducted its first nuclear test in the Algerian desert codenamed ‘Blue Jerboa’ which catapulted the country to the status of the fourth nuclear power after the United States, the Soviet Union and the United Kingdom. It was the largest first test bomb up to that date, which included the detonation of four nuclear bombs in Algeria over the course of fourteen months surpassing the American  ‘Trinity’, the Soviet ‘RDS-1’ and the British ‘Hurricane’; the yield was 70 kilotons bigger than the aforementioned three bombs combined. Between 1960 and 1966, three more atmospheric tests and 13 underground tests followed causing immense detrimental effects not only to humans, especially the local population, but also to the environment leaving behind a legacy of uncontained radiation. More than 60 years later, generations of the victims of the nuke tests continue to reel from the aftermath.

Most African states are still members of the African Nuclear-Weapon Free Zone which is also known as the ‘Pelindaba Treaty’ that prohibits the research, development, manufacture, stockpiling, acquisition, testing, possession, control or stationing of nuclear weapons, as well as the dumping of radioactive wastes. The Treaty which came into force in 2009 only advocates for the use of nuclear material, facilities and equipment exclusively for peaceful purposes requiring all parties to apply full-scope International Atomic Energy Agency safeguards to all their peaceful nuclear activities. Furthermore, it promotes the use of nuclear science and technology for economic and social development. Firmly entrenched in the Pelindaba Treaty are nuclear disarmament, nuclear non-proliferation and the peaceful use of nuclear energy. The African Commission on Nuclear Energy (AFCONE) headquartered in Pretoria, South Africa, is the main executive body of the Treaty which ensures compliance by members.

South Africa remains to be the only country to have built six nuclear weapons in the 1980s, but dismantled them in the early 1990s. Upon voluntarily abandoning its nuclear weapons program, South Africa joined the Treaty on the Non-Proliferation of Nuclear Weapons (NPT) in 1991 as a non-nuclear weapon state and allowed international inspections of its former program. In January 2021, the Treaty on the Prohibition of Nuclear Weapons (TPNW) popularly referred to as the ‘Ban Treaty’, reached the required threshold of 50 ratifications and entered into force. Being the largest bloc at the UN, this gives the continent an upper hand in terms of voting and agency power, which presents a rare opportunity to attain universal ratification of the treaty on Africa’s soil. Currently, 29 African States have signed the treaty but only nine have ratified it. This signifies a renewal in the continent’s commitment to a nuclear-weapon-free world; more countries need to sign and ratify.

A Nuclear Future for Africa?

The wound of Africa’s dark nuclear past can be redressed by seizing and tapping into the opportunities that nuclear science and technology presents as an alternative energy resource, having been identified as vital in driving development in the continent. With perspective that Africa has the lowest per capita contribution to greenhouse gases in global emissions adopting nuclear power will maintain this status quo as it is a clean, sustainable, zero-emission source with a miniature carbon footprint and produces minimal waste.

According to the World Nuclear Association, nuclear energy can play a critical role in mitigating the rising global demand whilst concurrently reducing carbon emissions. In Africa, according to the 2019 Africa Energy Outlook, 600 million people lack access to electricity while another estimated 900 million Africans utilize dirty and potentially hazardous fuels to cook. Presently, nuclear power plants produce about 10% of the global electricity. For instance, once Egypt completes building its four nuclear reactors, they are expected to cover 5-10% of the country’s electricity requirements. Other key sectors where nuclear science and technology can contribute to development include healthcare, agriculture and research.

The Atoms for Africa’s Development Project established by the South African Institute of International Affairs (SAIIA) explores how African countries can reap more from the peaceful application of nuclear technology to support the region’s development aspirations. It has been established that nuclear science and technology can help Africa achieve the aspirations of the Africa Union’s (AU) Agenda 2063 and the UN’s Sustainable Development Goals (SDGs). Being a global leader in its commitment to non-proliferation and embracing the peaceful use of nuclear power, Africa continues to advocate for the developmental aspects of nuclear energy to develop a regime that can boost the lives of many across the vast continent. Africa is home to various research reactors which already play a pivotal role and in tandem serve as the foundation of nuclear power programmes. Currently, South Africa is the only African country to operate a nuclear power plant, but Egypt and Ghana are well on course to clinch the second and third positions.

Other African countries that have developed a respectable track record in the field planning to establish fully-fledged nuclear programmes going further to garner support from the International Atomic Energy Agency (IAEA) for support include: Egypt, Algeria, Ghana, Kenya, Morocco, Niger, Sudan, Nigeria, Tunisia, Uganda, and Zambia. Ghana, following the internationally accepted comprehensive framework for developing infrastructure for nuclear power—the IAEA Milestones Approach—hopes to build a nuclear power plant by 2030.  In light of this, the country has approached Russia, China and the Republic of Korea for financial assistance as the venture is costly – estimated to be between $8 billion and $10 billion. Instead of just being spectators, African countries can enjoy equal access to peaceful nuclear energy and therefore, should be more proactive in including nuclear power generation as an alternative resource, thereby complying with the global goals of transitioning to cleaner energy.

Uganda: Demand for agricultural exports to push sector to growth