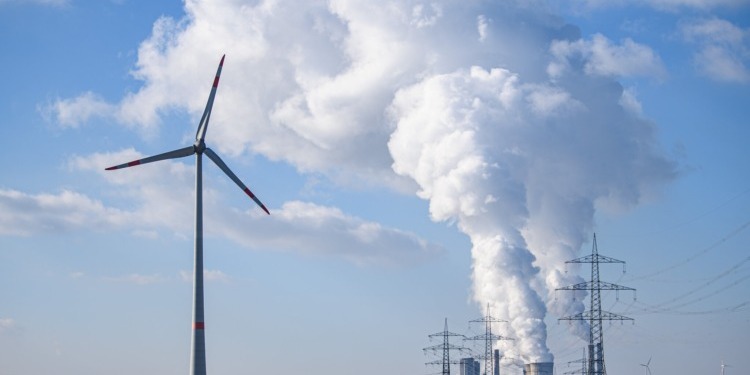 Wind and fossil fuel power generators. Africa is primed for a shift to renewable energy. [Photo/NYT]

The summit highlighted among a host of issues the importance of Africa taking the initiative to reduce its carbon footprint and emissions.

Africa’s largest multinational companies are following the global trend that is in vogue – that of making ambitious goals and undertakings to reduce carbon emissions ahead of this month’s climate change conference to be held in Glasgow, Scotland.

Leading the pack is Africa’s largest lender by assets, the Standard Bank Group, which in October held a 2-day climate summit that was streamed online and ran under the theme ‘Africa’s Journey to Net Zero’. The summit was hosted in partnership with the Institute of International Finance (IIF) a global financial think tank which partners with financial services firms worldwide including the Standard Bank Group.

More specifically the Institute of International Finance is the global association of the financial industry, with over 400 members from more than 70 countries. Its mission is to support the financial industry in the prudent management of risks; to develop sound industry practices; and to advocate for regulatory, financial and economic policies that are in the broad interests of its members and foster global financial stability and sustainable economic growth. IIF members include commercial and investment banks, asset managers, insurance companies, sovereign wealth funds, hedge funds, central banks, and development banks.

The summit highlighted among a host of issues the importance of Africa taking the initiative to reduce its carbon footprint and emissions in the wake of ever-increasing global temperatures. Of particular importance to note is that during the summit it was found that the rate of temperature increase across Africa will exceed the global average resulting in more frequent and intense and heavy rainfall, maritime heat waves, and sea level rising which will threaten maritime ecosystems. All of this does not bode well for the health and the wellbeing of local populations and for the worldwide fight against climate change. It was also widely acknowledged that when it comes to reporting the risk posed by climate change this is a key part of the equation.

The risk posed by climate change is real; however, it is difficult to quantify. Challenges noted during the summit include data collection, how to measure a firm’s global impact, methodological challenges like direct and indirect supply chain emissions as well jurisdictional and national climate reporting frameworks – some of the issues of difficulty in measuring and quantifying climate risk.

The recurring theme of the conference centered around the emergence of “net zero targets”, how they are being set and the progress being made towards them as well as how they are being measured. Policy-makers and regulators generally are directing financial flows towards more sustainable finance and towards emerging and developing economies. One of the major aims of the conference was how to report on these and how banks and financial services companies can make the best use of client money to reduce their carbon footprint. Several ways banks and the financial sector can reduce their carbon footprint have been developed. This has been widely reported. Central to this discourse is the assets and liability management of the banks. The calls for “greening” asset portfolios of banks are becoming louder and louder and the strategies to achieve this are becoming more and more comprehensive and substantive. A key area in this regard is in bank credit policies.

For starters, a lot of banks have begun to cut back on providing credit and finance to producers of high carbon emission goods and services. The most obvious case in point is the provision of credit to coal producers. Banks have mulled over the idea of providing green credit through the provision of novel products like green mortgages. According to the World Green Building Council under a green mortgage, a bank or mortgage lender offers a house buyer preferential terms if they can demonstrate that the property for which they are borrowing meets certain environmental standards. This could perhaps be a new build home with an existing sustainability rating, or where the borrower will commit to invest in renovating an existing building to improve its environmental performance. In other words, a green mortgage is a mortgage specifically targeted at green buildings.

As an incentive for the borrower to either buy a green building or to renovate an existing one to make it greener, the bank would offer them either a lower interest rate or an increased loan amount. There is still a long way to go in terms of getting banks to reduce funding to the high carbon emission businesses. The Climate Change Summit is a small but right step forward within the African context. A report aptly titled “Banking On Climate Chaos” compiled by a number of climate groups in March this year found that 60 of the largest commercial and investment banks have financed a collective US$3.8 trillion in fossil fuel companies between 2016 and 2020. 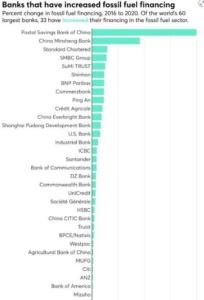 Those depicted below have reduced the amount of credit advanced to high carbon footprint entities. 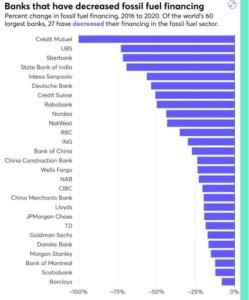 While such a quantum of money spent on high carbon footprint businesses is troubling some banks have been reducing their support to such businesses. What is clear is that banks wield enormous power in climate change and a good number of them like the Standard Bank Group are using that power responsibly to increase awareness about the dangers and the complexities posed by climate change. 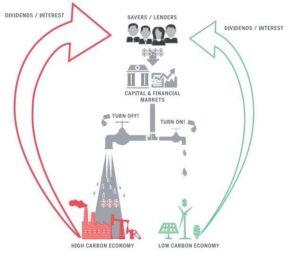 Sasol, the petrochemicals and energy giant has also made a firm commitment to reducing its own carbon emissions. The company revised its target to reduce greenhouse gas emissions by 30 per cent up from 10 per cent. This target will require capital expenditure in the region of between ZAR10 billion to ZAR25 billion according to the company’s chief financial officer.

The company also mentioned that it would not be making further investments into coal projects and would be substituting its coal feedstock with gas as it looks forward to a decarbonized future. Sasol is one of the two major Sulphur dioxide emitters in the country; the other is the state power utility Eskom. Sasol envisages that it will be carbon neutral by 2050 and is already making strides towards achieving this goal through what it has called the decarbonization of its assets, the introduction of energy efficiencies as well as investment in renewables.

Earlier this year Anglo American, another multinational with a large presence in Africa announced its decision to become carbon neutral and followed up this stance with the demerger of its coal operations into a standalone pure-play coal producer called Thungela Resources Limited.

Other African mining companies have followed suit namely the largest coal producer on the JSE, Exxaro Resources, which is venturing into other geographies and commodities to reduce its reliance on coal for the bulk of its earnings. The company is planning to diversify into the production of copper, manganese, and bauxite.

African companies are not getting left behind in the effort to reduce their carbon footprint. They are punching above their weight; however much more still needs to be done. Reducing carbon emissions especially in the African context is certain to be a complex affair as many countries especially in southern Africa rely heavily on high carbon emission activities for their economic livelihoods.