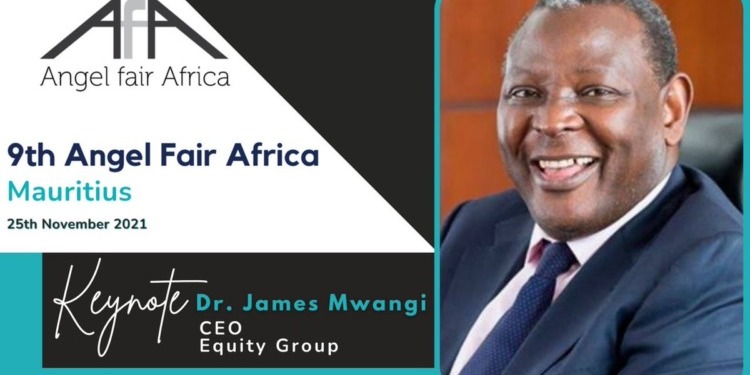 Dr. Mwangi will keynote the event alongside EDventure Holdings chairwoman Arch Angel Esther Dyson, who is also the executive founder of Wellville

The Equity Group Holdings Managing Director and CEO James Mwangi will be a keynote speaker at the upcoming 9th Angel Fair Africa (AFA) that will be held in Port Louis, Mauritius.

Dr. Mwangi will keynote the event alongside EDventure Holdings chairwoman Arch Angel Esther Dyson, who is also the executive founder of Wellville.

AFA is a Chanzo Capital event that brings selected African entrepreneurs to pitch to a room of curated investors with the intent of doing deals.

In this year’s event, Chanzo Capital has partnered with the Africa India Entrepreneurship Forum (AIEF) and Future Female Invest.

AIEF is a not-for-profit entity and go to platform connecting Indian and African entrepreneurial ecosystems.

The event would be followed by the AIEF on the 26th of November 2021 at the Hennessey Park Hotel in the Ebene Cyber City.

According to a press statement by the event organizers, selected entrepreneurs would participate in the second Africa Virtual Accelerator (AVA) from the 1st to 20th November 2021 put together by Chanzo Capital in partnership with the Adei Technology Hub.

The selected entrepreneurs, the organizers say, would arrive in Port Louis to participate in the Entrepreneurs Bootcamp from the 22 nd to 24th November 2021.

Dr. Mwangi will give an address on how he built Equity Bank from a building society in Kenya to the leading financial institution in East and Central Africa.

“On the morning of 25th November 2021, Dr. James Mwangi would rise with the sun as he tells the room of investors and entrepreneurs how he built Equity Bank from a building society, number 66 out of 66 banks in Kenya to the leading financial institution in East and Central Africa,” reads the statement in part.

Dr. Mwangi’s counterpart Esther Dyson will on the other hand will address the investors and entrepreneurs at the event on investing in social apps, among them Facebook, LinkedIn, Delicio.us, Evernote, Flickr, 23andMe, Omada Health, BAMF Health, Ilara Health, Meetup and Square. 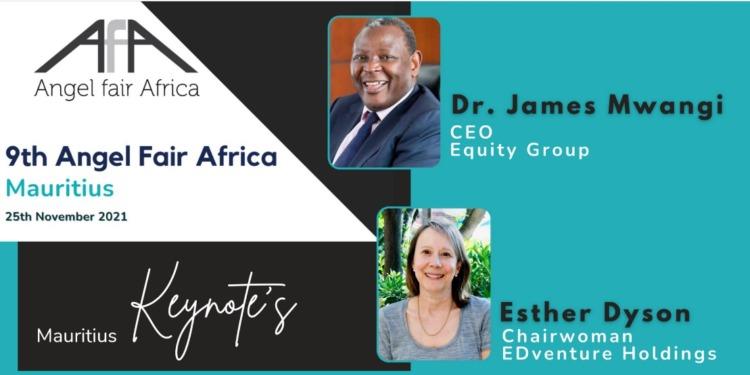 “Esther Dyson would close the day in a fireside chat sharing her gems of wisdom on investing in Facebook, LinkedIn, Delicio.us, Evernote, Flickr, 23andMe, Omada Health, BAMF Health, Ilara Health, Meetup, Square etc. and her recent focus on health equity with the founding of Way to Wellville,” the organizers said.

Esther has also invested in African startups such as Rasello, Nomanini, Angaza, Swvl and Trella.

The event was started In 2013 and has hence resulted in $23M worth of investments in the KINGS Countries of Kenya, Ivory Coast, Nigeria, Ghana, South Africa and others.

The event, which has been held in Johannesburg (SA) 2013, Lagos (Nigeria) 2014, Accra (Ghana) 2015, Nairobi (Kenya) 2016, Abidjan (Ivory Coast) 2017, Maputo (Mozambique) 2018, Dar es Salaam (Tanzania) 2019 and Senegal (virtually) will this year bring investors, entrepreneurs, and ecosystem players to the island of Mauritius to do deals, network and share experiences.

All the Covid-19 protocols will be observed throughout the event.

According to AIEF founder Baljinder Sharma, there has been a growing pollination between the Africa and India tech and investment ecosystems.

Sharma says that having the AFA back-to-back with the AIEF would strengthen the currently existing healthy development that could lead to mergers, acquisitions and investments.

Aysha Tegally, the Co-Founder of Future Female Invest and Future Females Invest Angels said that Mauritius is establishing itself not only as an offshore financial centre but an investment destination with a lot of substance being built in various sectors including the tech sector.

“AFA is helping to spotlight the country in that regard, and we are excited to be partnering to make the event a success,” notes Tegally.

As more and more people get vaccinated and the global economy continue opening up again, Ian Ziddah, the  Operating Partner of Chanzo Capital indicates that they are excited to take the annual AFA to Mauritius.

This year’s AFA has been organized in partnership with the Mauritius Economic Development Board who  approved the event.