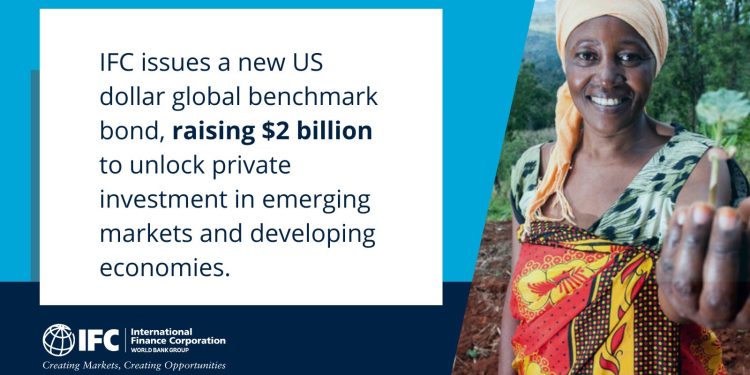 The deal received considerable support, and the ultimate transaction book was closed at more than US$4.9 billion by over 100 investors.

The deal received considerable support, and the ultimate transaction book was closed at more than US$4.9 billion by over 100 investors.

“The bond’s proceeds will release finance for businesses and help generate jobs as developing countries cope with several overlapping concerns, ranging from rising prices for food and energy to war and fragility,”John explained.

The new standard pays a semi-annual coupon of 3.625 per cent. Morgan Stanley, Citi, Wells Fargo Securities, and TD Securities served as the joint lead managers for this transaction.

IFC achieves another outstanding result in the capital markets! Utilising the robust USD SSA primary market following the summer, the new three-year benchmark was oversubscribed by more than 2.4 times, with both a highly diversified and high-quality final order book.

IFC has succeeded in ensuring that its global annual outing encapsulates the broadest possible investor attention through coherent excellence in execution.

“Congratulations to the IFC team; Citi is honoured to have played a role in this transaction,” Citi Managing Director, Public Sector DCM, Ebba Wexler, stated.

“With this deal, IFC has reinforced their benchmark product as a core USD asset, highly valued by investors worldwide. A massive comeback to the USD benchmark segment for IFC, gaining a strong market and attaining an outstanding pricing result despite the ongoing volatility and challenging wider market conditions. Congratulations to the entire IFC team!” Head of SSA, Morgan Stanley, Ben Adubi stated.

“Congratulations to the IFC team on a successful three-year USD benchmark transaction. IFC drew interest from the entire SSA universe for their first USD benchmark of the new fiscal year.

During a turbulent year in the fixed-income markets, the three-year maturity allowed IFC to capture demand from more comfortable investors at the curve’s front end. Because of the strong demand for IFC’s name, IFC was able to engage in valuations successfully and tightened by three basis points from initial price thoughts(IPTs), ” TD Securities’ Managing Director, Fixed Income Origination & Syndication, Laura O’Connor, said.

“WFS is honoured to be included in the IFC’s first USD benchmark for the current funding year. The combination of good timing and strong demand, as well as the issuer’s rarity worth and international reach, resulted in an excellent order book with significant oversubscription. Moreover, the deal joins a small group of issues priced three basis points lower than IPTs this year. Congratulations to the IFC team on this global benchmark’s resounding success, ” Wells Fargo Securities’ Head of SSA Origination, Carlos Perezgrovas, said.

Since 2000, IFC has issued global bonds denominated in US dollars. Furthermore, IFC supplements its public issuance by entering various markets, including private placements and themes bonds, such as green bonds to promote climate-smart business and social bonds to fund IFC projects that assist underfunded individuals in developing nations with constrained access to essential services.

IFC also issues local-currency bonds to support the development of local capital markets and to help finance local-currency investments and special offer notes in US dollars. Standard & Poor’s and Moody’s have assigned triple-A ratings to all IFC bond issuances.

Stagflation and how to solve it