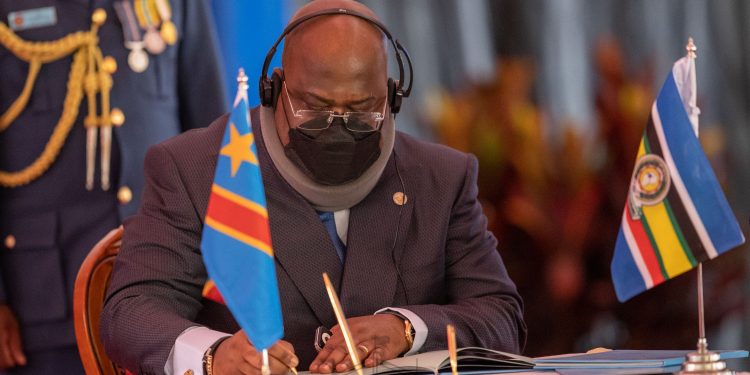 DRC in the EAC. The world’s best placed economic bloc?

Recently, the Democratic Republic of Congo joined the East African Community to become the seventh member of the bloc. The addition of the country to EAC has brought an exciting twist to the continent, creating arguably the best-placed region economically and politically.

Why did Congo join East Africa?

With two ports of entry, one from the Indian Ocean and the other from the Atlantic Ocean in the DRC, trade-in East Africa will have a seamless flow. However, the Indian Ocean is the best and most economical-friendly option better to open up trade in the Democratic Republic of Congo. Here is why.

The natural resource concentration in the DRC is more on the Eastern side, bordering five East African nations. President Felix Tsishekedi intends to use the already installed infrastructure in these countries to move their goods to the ports of Mombasa and Dar es Salaam.

One such infrastructure is the standard gauge railway, which has shortened the time to travel from Uganda to Mombasa from 7 days to 17 hours.

Read: DRC and EAC: Who stands to gain more from the pact?

The poor roads in the DRC and the level of insecurity in the country make it difficult and costly to move these mineral resources to the Atlantic port. This makes DRCs decision to join the EAC their most viable option.

A state-owned shipping line from the Congo, the Lignes Maritimes Congolaises (LMC), has already set base in Kenya and plans to start its operation in Mombasa starting this June.

The shipping line seeks to channel more exports and imports goods through the port of Mombasa.

The DRC also joined the EAC for member countries to help the country fight terrorism. In response, the seven nations are ready to fight terrorism in the region, a situation that has disrupted the realization of the full economic potential of these economies.

Recently, President Uhuru Kenyatta, the chairman of the EAC, raised a call for armed groups in the DRC to lay down their weapons and work with President Felix Tshisekedi for peace and stability. Some rebel groups heeded his call and agreed to engage in dialogue with the government in Kinshasa.

Is there going to be an East African Federation?

The East African Community is looking at the potential to create a federation operating similarly to the European Union. The East African Federation is a proposed sovereign country composed of the seven EAC member states.

If the countries could reach a consensus on the political and economic alignment of the Federation, they would create the best placed economic regional bloc in Africa. Here is why:

These characteristics would quickly raise the East African Federation (EAF), Africa’s largest superpower, because of the region’s weaker neighbours.

The formation of the EAF would be the biggest border change ever since the fall of the Soviet Union.

Challenges slowing down the formation of the East African Federation

Countries are sceptical about forming the regional bloc as it will be an enemy to local markets. Previously, governments have taxed goods from their neighbours to protect their local markets. For example, President Kenyatta’s administration has locked Ugandan, timber, milk, maize and sugar to protect Kenyan local farmers.

Furthermore, harmonizing fiscal and monetary policies in the seven countries to converge the currencies in East Africa into one is problematic for two reasons; Each country in the region has its currency, and they all experience wildly fluctuating exchange rates.

Read: EAC: From the Indian Ocean to the Atlantic Ocean!

Another challenge is that the East African Community countries will lose a certain measure of sovereignty if they agree to form one sovereign country. The big question is, how will the leadership dynamic be distributed, and how will that stand with each member state? However, these are issues that are still in progress.

Sudan and Somalia had earlier submitted their interests in joining the EAC. The addition of these countries to the region would increase the power of the East African Federation if they allowed these two countries to join.

The future of Somalia in the EAC is a farfetched reality that will take some time before coming to a reality.

Could Somalia joining the EAF increase their economic output?

Somalia’s opportunity to join the region is further off specifically because of two reasons; The political instability in the country and the water-oil relationship between President Kenyatta and Somalia’s President, Mohamed Farmajo.

The two heads of state have been at loggerheads on a variety of issues:

Kenya is having a general election in August this year. The Fifth President might revise the diplomatic relations between Kenya and Somalia and facilitate for Somalia to join the EAC.

Read: US$49.2 million worth of DRC exports into EAC herald bright future

Zimplats Holdings the jewel in the Impala Platinum's crown