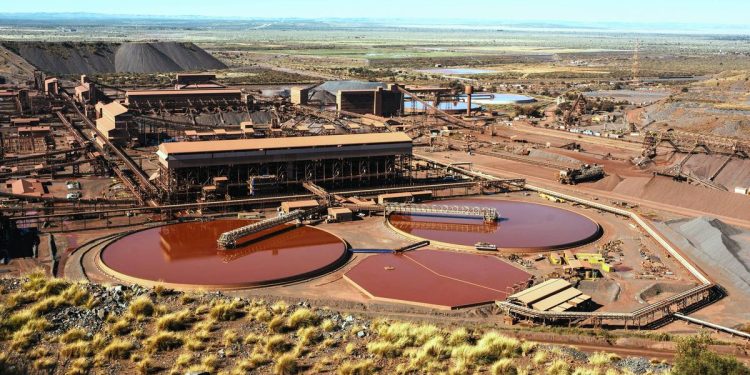 The Kumba Iron Ore in South Africa. It is the largest iron-ore producer in Africa. [Photo/ Asean Records World]

The rainmaker company strikes a very elegant balance between making money and making a difference.

Nompumelelo Zikalala is by all counts an impressive mining executive.

She has over 20 years of mining experience and boasts very impressive credentials which culminated in being appointed managing director of De Beers Group Managed Operations.

Prior to this appointment, she was deputy CEO of De Beers Consolidated Mines.

According to a company website, she is a former De Beers Group bursar and officially joined De Beers in 2001 as a process engineer. As part of her production journey, she worked on process improvement and plant design projects, she also worked in various leadership levels within production management. She was appointed General Manager at De Beers Kimberley Mines in 2007, becoming the first female General Manager in the De Beers Group.

In 2010, she was appointed General Manager of De Beers Voorspoed mine and three and a half years later became Senior Vice-President of De Beers Sightholder Sales South Africa.

She is now the substantive chief executive of Anglo American’s subsidiary Kumba Iron Ore Limited as of the 1st of January. One of the few women in charge of a listed global mining company. Zikalala is part of the 13% of women executives of listed companies on the Johannesburg Stock Exchange.

Fewer definitions and stories of trailblazers rising out humble beginnings to the pinnacle of success exist. Despite its leader’s glowing credentials and background, Anglo American’s iron ore mining unit did not get off to a good start on the day that it was slated to report its earnings for the 6 months to end 2021.

This contrasts with the very strong numbers reported by the company. What is it that had the market spooked?

On the surface the market is no longer surprised by the numbers that commodity producers are reporting during their earnings calls. Notwithstanding the considerable dip in share price the iron ore company which is part of the larger Anglo-American group posted a strong set of numbers and declared a dividend which would in many cases be welcome by shareholders. The company generated ZAR 30.5 billion (US$ 2 billion) of free cash flow in the six months to end December 2021 which was up 47% from the previous year. For the second year in a row the iron ore miner grew its return on capital employed exponentials by 147% up from 109% the year before. To crown it all Kumba Iron Ore declared a final dividend of ZAR 30.50 per share taking the total payout to ZAR 103.20 per share.

It is curious why the market finds such disclosures boring…

Read: Coal and Iron projects ready to begin in Tanzania

The company reported some significant developments on ESG. What stood out the most is the company’s stance on employee welfare. There were no fatalities at Kumba Iron Ore in 2021 which is incredible for a mining company.

What is even more incredible is that there have been no fatalities for the last 5 years at the company. This is like what Kumba’s sister company which announced its results on 21st February 23, 2022. Anglo Plat also announced also that it had no fatalities in 2021. This goes to show the zero-tolerance stance to fatalities by the parent company Anglo American PLC. What was also noteworthy from the ESG report of the iron ore miner is that it has a target to use 50% less fresh water in its operations by 2030. The company is on course to achieving this goal.

Commendably the company pumped 17 billion liters of fresh water to communities in water stressed areas where it operates its mines. Additionally, the company reported that it had rehabilitated as much as 138 hectares of land where it conducts it activities. Mining operations are harmful to the environment.

They cause degradation to the flora and fauna of a place and for a miner to rehabilitate in a year a swath of land as large as 138 hectares is especially praiseworthy.

The company reported no loss due to Covid-19 and has over 75% of its workforce fully vaccinated. Doing good is good business. The company has a group-wide goal to be carbon neutral by 2040 and this objective has permeated every aspect of its operations including the iron it produces.

The company is part of the JSE listed industrial mining and metals sector which is collectively worth ZAR 5.46 trillion or (US$ 360.11 billion). It is the fifth-largest company in that sector. The company produces iron ore from two mines namely Sishen and Kolomela in South Africa.

Kumba Iron Ore’s finances during 2021 were premised on 3 things namely what the company described as “disciplined capital allocation” which involved the cash payouts to shareholders on the back of the improved return on capital ratios. The second aspect that drove the company’s financials was what it called “value-focused growth”. The company enjoyed a higher-than-average price for its ores.

It reportedly earned an average forward on board (FOB) export price of at least US$ 161 per ton which was 18% higher than the benchmark during 2021.

The company ended 2021 flush with cash on the back of increased productivity from its 2 mines Sishen and Kolomela. Kumba dug 40.9 million tons (Mt) of iron ore out of the ground and exported 40.2 Mt of it globally. This is one of the unique investing points about Kumba Iron Ore Limited. Nearly all the product it mines is sold overseas and consequently, the company generates vast amounts of foreign exchange. Kumba has benefited greatly from the increase in the price of commodities as with other large-cap miners and from the depreciation of the Rand. These two factors acting in concert have produced record profits. The company reported a 63% EBITDA margin which was higher than the 57% margin achieved in 2020.

Capital expenditure is one of the most instructive indicators to investors on future expectations around a company’s financial prospects and earnings. In 2021, Kumba increased its capital expenditure to ZAR 8 billion (US$ 528 million) and it expects to grow this all-important budget in 2022 to anything between ZAR 10.5 billion to ZAR 11.5 billion. The company finished the year with an attributable free cash flow of ZAR 30.5 billion and an EBITDA of ZAR 64.6 billion in 2021. It had such a good year in 2021 that it paid dividends to shareholders that were 69% higher than in the previous year and exceptionally paid a dividend that was 100% of headline earnings per share.

Headline earnings refer to a company’s income from operations, trading, and investments only. Headline earnings, therefore, exclude certain one-time or exceptional items such as write-offs. Analysts look to headline earnings as a basis for how a company is operating at its business-as-usual capacity.

Kumba has pulled off this remarkable feat of paying dividends equal to headline earnings not just in 2021 but for every single year since 2018! In other years during this period, the company would pay dividends of as much as 95% of headline earnings. This can signal to investors that the iron ore producer has confidence in its ability to generate cash and has sufficient cash resources to fund future capital projects without engaging an external financier. 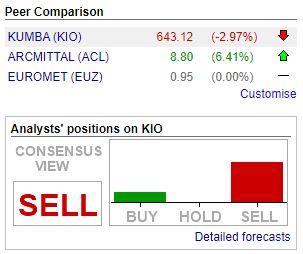 Kumba Iron Ore Limited has all the hallmarks of a blue-chip company. It has high margin assets and the company has spent capital extending their useful life. Going into 2022 the company expects to increase production to 41 Mt while reducing its cash costs to US$ 41/tonne. This taking into consideration the increased FOB price of iron at US$ 161/ton leaves it with a very comfortable margin with which to carry on generating exceptional value financially.