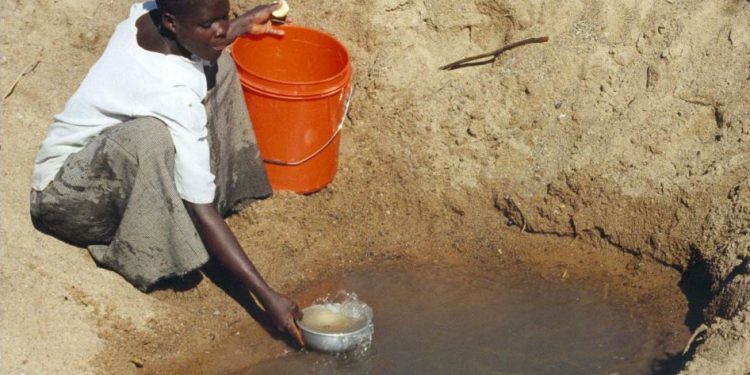 Water scarcity has left no corner of the continent unscathed. Water, which is a basic survival need is not universally enjoyed by many Africans, with one in three Africans facing water scarcity and approximately 400 million people in the Sub-Sahara lacking access to basic drinking water.

In the wake of the ongoing devastating drought that continues to ravage the Horn of Africa at an alarming rate, it is imperative to urgently redress Africa’s perennial water crisis. The United Nations Office for the Coordination of Humanitarian Affairs (OCHA) reports that communities in the Horn of Africa are experiencing one of the most severe La Niña-induced droughts leading Kenya and Somalia to declare national emergencies due to poor and unpredictable rainy seasons. According to the World Food Programme (WFP), an estimated 13 million people are grappling with a major drought caused by the driest conditions since 1981.

This has been the aftermath of three failed rainy seasons in Kenya, Ethiopia and Somalia that have led to extreme water shortages, consequently leading to the decimation of crops and livestock deaths, forcing families from their homes and triggering conflict between communities. The root of this deleterious crisis has been climate change pertinently characterized by changing rainfall patterns and rising temperatures. It is no surprise, given that Africa is the most vulnerable region to the global climate change crisis, despite its low greenhouse gas emissions.

Despite water security being a key priority area in Africa’s Agenda 2063, much more needs to be done to achieve this aspiration, which is additionally tied to Goal 6 of the UN Sustainable Development Goals (SDGs) that advocates for access to clean, safe and affordable water and sanitation as a fundamental human right.

In reiteration, Africa’s “Water Vision for 2025”, initiated by the African Development Bank (AfDB), which is a document that guides African countries in shaping water policy and programs highlights that inadequate access to water and sanitation is a leading cause of numerous water-borne diseases, consequently resulting in economic loss and extreme poverty.

Being the second driest continent in the world after Australia, it is not astounding that a report by the World Resource Institute (WRI) reveals that access to water remains a pervasive development issue across the continent with millions of Africans lacking access to clean water and still perennially suffering from shortages.

The 9th World Water Forum held late last month in Senegal, focused on four priorities: water security and sanitation, cooperation, water for rural development, means and tools for implementation of reforms in water and sanitation. The theme for the Forum was ‘water security for peace and development’ and was the first to be ever hosted in Sub-Saharan Africa.

The Forum, which convened heads of states, key political actors, business leaders, NGOs and donors provided a unique platform for the water community and key decision-makers to collaborate and make long-term progress on global water challenges at the midpoint of the 2030 agenda on implementing water and sanitation targets as stipulated under the SDGs.

Water scarcity has left no corner of the continent unscathed. Water, which is a basic survival need is not universally enjoyed by many Africans, with one in three Africans facing water scarcity and approximately 400 million people in the Sub-Sahara lacking access to basic drinking water. According to the World Bank, Africa loses 5 per cent of its GDP every year due to water scarcity, with the MENA region experiencing the greatest economic losses from climate-related water scarcity projected to range between 6 per cent and 14 per cent respectively by 2050.

Drought in the Horn of Africa is of particular concern due to its severity, which has led to a string of other existential quagmires such as healthcare deterioration, heightened food insecurity, widespread drought-induced displacement, conflict over scarce resources, increased abuse and exploitation of children and women among many more.

In light of this, the International Organization for Migration (IOM), has called for an urgent and efficient humanitarian response, to avoid a large-scale deterioration throughout the region that has previously been rendered vulnerable by a plethora of misfortunes, such as the desert locust invasion due to climate change and critically worsened by the adverse effects of the Covid-19 pandemic.

The situation has especially been dire in Somalia that necessitated the government to declare a state of emergency in November 2021.  A Displacement Tracking Matrix analysis conducted by the IOM reveals that drought conditions could imminently supplant over one million Somalis, adding to the 2.9 million already displaced.

In Ethiopia, the drought has eroded the livelihoods of at least four million pastoralist and agro-pastoralist communities. By the same token, people in Kenya’s arid and semi-arid lands (ASAL), pertinently in sixteen of the country’s 23 ASAL counties continue to suffer the catastrophic effects of the drought which is predicted to worsen in the coming months.

South Africa continues to suffer the adverse effects of the ‘Day Zero’ drought, which has been ongoing since 2015, described as one of the worst droughts experienced by the country in recent times, particularly in the Western Cape region. According to climate scientists, increased climate variability will expose the country to more frequent and prolonged droughts.

This will be exacerbated by population growth, water pollution, industrialization and rural-urban migration; which have created additional water stress on the already scarce water resources. Currently, President Cyril Ramaphosa has declared a national state of disaster in South Africa to respond to widespread flooding in the Eastern region that has caused the loss of lives and unspeakable economic damage.

Morocco is experiencing a calamitous drought, the worst of its kind experienced in the North African country in nearly four decades. Since September 2021, the country has experienced rainfall deficits, causing an alarming drop in dam reserves of almost 89%, in comparison to the annual average.

According to the Moroccan Ministry of Agriculture, the drought is expected to gradually intensify across the Kingdom of Morocco until 2050, as a result of a drop in rainfall by -11% and an increase in temperature of +1.3°C. In response, the World Bank has granted the country a €163 million loan to cope with the climate crisis.

Madagascar is endowed with abundant water, but has been a critical victim of the climate change crisis, and now suffers prolonged drought and famine, due to alterations in its hydrological cycle.

What Measures Should Africa Enforce to Solve the Water Crisis?

Just what will it take to adequately provide water for the continent?

Evidently, Africa’s water issue needs urgent redress to ensure all Africans have access to safe water for drinking and sanitation purposes. Africa needs more inclusive, integrated and innovative strategies of addressing the water scarcity quandary. The AfDB estimates that $64 billion will be needed annually to meet the continent’s water-related needs. Currently, investments in water infrastructure in Africa each year range between $10 billion and $19 billion.

Addressing climate change is the first step African countries should take to reduce climate-induced occurrences such as the unpredictable rainy seasons which lead to poor rainfall distribution. Seeking climate finance should be a priority for African governments to aid in this endeavor, as this has been a major impediment that was addressed last year at the COP26 in Glasgow.

Bold and transformative actions and solutions are needed, such as the Niger Integrated Water Security Platform Project, which is putting the country’s National Action Plan for Integrated Water Resources Management into action. Its key objective is to coordinate all water-related planning, policies and investments by bringing together relevant parties to address issues revolving around use, management, protection and knowledge of water resources.

Adequately tapping into groundwater and its consequent sustainable development thereof, could help alleviate the severe water stress, and is bound to have profound ramifications on the continent. Groundwater in Africa is accessed through boreholes, wells and springs. It is mostly used as drinking water and for irrigation and manufacturing purposes.

The African Ministers’ Council on Water (AMCOW) runs a Pan-African groundwater program (APAGroP), whose vision is to improve the livelihoods of the African people, through improved groundwater policy and practice, sustainable and equitable use to boost food security and resilience in the continent.

Desalination of sea water could prove viable, with countries like Morocco exploring this possibility through the ongoing construction of desalination plants in different parts of the country, such as in Casablanca and Saïdia. Increasing water storage infrastructure is another solution that has the potential to alleviate Africa’s water stress, such as in large dams.

Southern Africa is hailed for its large dams, with South Africa leading with over 25 percent of all large dams in the continent, outscored by Ghana, Zimbabwe and Zambia; but worst in East Africa which reflects low levels of water storage development.

Preservation and conservation of water resources needs to be drummed into Africa’s diverse cultures, to ensure sustainability such as controlling pollution in water bodies. In reiteration, this would be greatly aided by cultivating, empowering and engaging citizens on water conservation. The contentious Grand Ethiopian Renaissance Dam (GERD) in Ethiopia, is projected to mitigate water stress in the Horn of Africa and Egypt should an amicable agreement be reached between the two nations.

Building water-smart sensitive cities, with quality water management and a supportive governance environment coupled with practicing integrated water planning could greatly boost equitable water access in urban centers. Africa continues to look forward to the 2nd Ocean Conference to be held from 27th June to 2nd July in Lisbon. It will be a high-level symposium on water, a gesture to promote integrated vision of the water cycle jointly organized by Portugal in partnership with Kenya.