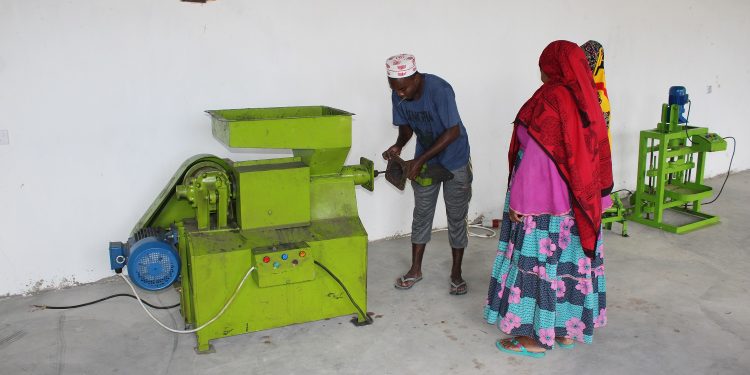 Some of the group members learning the components of the new briquette making machine. The machine can produce 500 briquettes per day. [Photo/Njenga Hakeenah]

The great reliance on firewood raises social, economic, environmental, and health concerns. Thus, a more comprehensive strategy is required to address the fuel challenges in Africa since they are complex.

Statistics show that 90 per cent of the wood produced in sub-Saharan Africa each year is utilised as fuel.

This creates a significant sustainability concern to meet the demands of the continent’s rapidly expanding population without wiping out its forests.

Two-thirds of households rely on wood fuel, usually firewood and charcoal, as their primary source of cooking energy. For this reason, producing wood fuel provides a living for millions of households. The great reliance on firewood raises social, economic, environmental, and health concerns. Thus, a more comprehensive strategy is required to address the fuel challenges in Africa since they are complex.

In response to this, Zanzibar is now hosting a reputable waste-to-energy project which uses agricultural waste to create biochar which is then converted into briquettes. United for Green is meant to respond to the fuel needs of Africans by providing clean and reliable energy.

In Zanzibar, women are also getting the opportunity to become economically empowered by participating in the briquettes’ production while simultaneously working to prevent deforestation.

More than 80 per cent of Tanzanians get their cooking energy from burning biomass, including firewood and other conventional fuels. In the entire country, almost 90 per cent of all energy is consumed in the form of biomass.

With the growing population in both urban and rural regions, there is a tremendous strain on biomass resources, resulting in some areas’ desertification and deforestation. The main biomass energy sources in recent years have been firewood and charcoal

United for Green is working to ensure that Africans do not get to these extremes. By empowering women, the plan is to provide clean fuel at the least risk to the environment, especially forests which are the major biomass fuel sources.

United for Green started before the pandemic hit in 2019, when the concept of bio charcoal was born several kilometres away in Kadzinuni, Kenya. This followed a partnership with a group of students from Exeter University in the UK to design the charcoal briquettes production process.

The briquette raw materials are processed through pyrolysis thermochemical decomposition of organic matter. The byproducts of pyrolysis are condensable gases, condensable liquids and a solid residual coproduct, charcoal or biochar.

All these are produced in an inert environment in the absence of oxygen.

Bio-charcoal is a lightweight black carbon residue created by extracting water and other volatile components from organic materials.

In July, United for Green, through its founder Renos Fountoulakis, acquired the equipment used in this process and with the availability of raw materials, the process can produce 500 briquettes per day. Due to the increasing demand for organic briquettes not only in Zanzibar, but the plan is also to scale up production, which could offer better returns for the community that relies on the charcoal briquettes for their livelihood.

The biochar initiative was launched in Kizimkazi, Zanzibar, in 2021.

Augustine Mwombeki, a co-founder of United for Green, says they conducted thorough research and feasibility studies in collaboration with the Tufahamiane Women Development Group in Kizimkazi to ensure that the project not only empowers women but also helps with preserving the environment.

More than 30 women have already attended training sessions and seminars on the value of environmental preservation and how to produce affordable and effective bio-energy from green waste.

Bi. Talha Massa Haji is the chairperson of the Tufahamiane group, which has existed for two decades. She says that with the changing times, especially due to climate change, the availability of fuel is a challenge that cannot be wished away or ignored.

She says that her community has seen firsthand the effects of climate change. The only way out now is to ensure that the natural resources are conserved to benefit those who are alive now and for future generations.

After drying them, the raw materials are taken to the centre where pyrolysis occurs; with the acquisition of the briquette-making equipment, the women’s group that has been in existence for 22 years targets to increase production, employment and membership.

In addition, the group has also increased conservation efforts to ensure that their raw materials are easily accessible.

One of the biggest selling points for these organic briquettes is that they are reusable up to three times. Bi. Talha says that these briquettes are cheaper to use than charcoal, which can only be used once due to this factor.

With this in mind, the women’s group says that the shift is timely and it is an idea whose time has come.