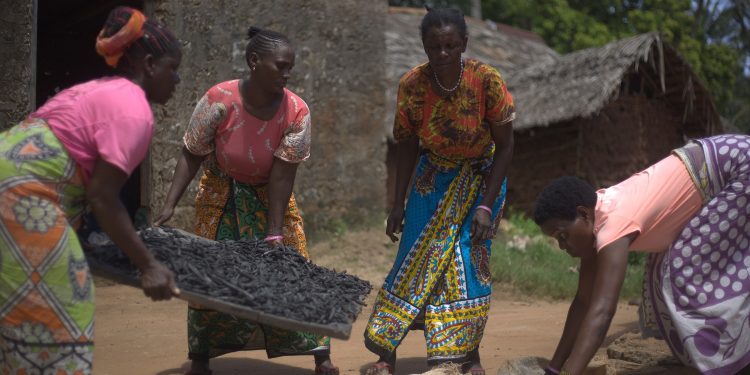 Women working to produce the reusable, organic charcoal in Zanzibar. Some sectors will benefit from the projected 6.8% economic growth in Zanzibar. [Photo/CR Hope FDN]

The machine used in this process makes 500 briquettes per day and CR Hope is looking to increase this due to increasing demand for the fuel.

According to the World Bank, biomass energy was used by 80 per cent of Africans in 2010.

This number was and still is, the highest in Sub-Saharan Africa (SSA). The majority of this population’s energy came from cooking with wood, grain and animal waste.

In 2050, 65 per cent of the world’s population will still use wood as a primary source of energy for cooking.

According to a UNEP report released in 2019, urgent action is needed to address Africa’s use of biomass as a fuel.

Renos Fountoulakis has responded to this call with a project under the CR HOPE Foundation co-founded with Cosiano Ismaili Mbise. The charity was launched in 2017 to fight poverty by providing quality education to children and youth in Zanzibar, Tanzania.

The programme which produces briquettes from agricultural waste is expanding beyond Tanzania and has already started in Kenya as United For Green. Cameroon is the other country that the programme is launching next.

To produce organic charcoal, women are trained to convert biomass to charcoal which also happens to be reusable.

CR Hope Foundation partnered with Exeter University to produce the charcoal briquettes. The briquettes are produced using pyrolysis. Pyrolysis is the thermochemical decomposition of organic matter resulting in no condensable gases, condensable liquids and a solid residual coproduct, charcoal or biochar in an inert environment in the absence of oxygen.

The machine used in this process makes 500 briquettes per day and CR Hope is looking to improve this production due to the increasing demand for organic briquettes. This should mean better returns for the community that relies on the charcoal briquettes for their livelihood.

Renos, a Greek living in Dubai, says that the programme in Zanzibar has 72 children aged between 3 and 8 years. The children go to a school that is run by well-wishers.

CR HOPE is providing quality education to the 72 school-aged children, helping them to improve their literacy and numeracy abilities and encouraging them to become interested in sports, community development and leadership.

Renos says, “All of our actions are guided by our core values. Because we know that good intentions alone aren’t enough to make a difference, we track the results of our initiatives and hold ourselves accountable for them.”

With the briquettes, it is possible to use renewable energy generation as a means of generating power in Africa, as pollution from deteriorating activities has a domino impact on the global economy.

UNEP’s Regional Director for Africa, Juliette Biao Koudenoukpo, says that “in a region where deforestation and land degradation is high and progress toward achieving universal access to energy is still slow, African governments need to pay special attention to the sustainable management of biomass as a source of energy.”

In order for African countries to meet global energy objectives by 2030, governments must address biomass energy use in order to minimize its detrimental impact on human health and the environment, according to the 2019 study.

In the midst of tremendous progress in renewable energy, urgent action is needed to reduce the usage of wood as a source of energy in the region, said Abou-Zeid, Commissioner for Infrastructure and Energy of the African Union Commission.

According to the African Union Development Agency-New Partnership for Africa’s Development (AUDA-NEPAD), the continent requires an estimated US$188 billion to create modern energy infrastructure and meet the continent’s demand for power, the key driver of economic liberation.

As the continent looks for new sources of energy, such as solar and biofuels, it must make a commitment to modernizing its infrastructure and improving the lives of its 3 billion people.

Most African countries already have a number of hydropower producing projects in place, which are aimed at improving access to electricity. Even as the continent works toward universal access to clean energy, the Cosiano Renos HOPE Foundation (CR HOPE) is showing that there is a starting point.

By producing clean energy from agricultural waste, the foundation is not only providing much better energy in comparison to firewood but they are also helping create jobs for communities.