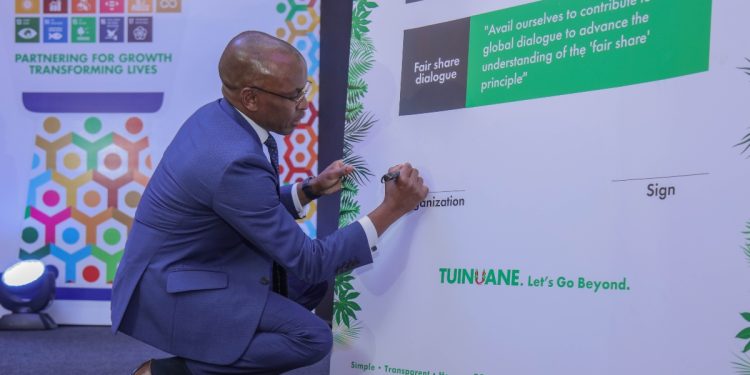 Kenyan CEOs have been urged to join the Africa Business Leaders Coalition (ABLC).

While mobilising his counterparts, Safaricom’s CEO, Peter Ndegwa, urged CEOs to take the initiative and be part of the commitment to advance Africa’s sustainable growth, prosperity and development.

Safaricom is one of the coalition’s founding members whose aim is to bring together CEOs from across the continent to help drive action on pressing sustainability issues and promote UN Global Compact principles in their supply chains and broader ecosystem.

Speaking during Safaricom’s 11th Sustainability Report launch, Ndegwa said they were advancing the agenda on the importance of partnerships in resolving pressing global challenges such as climate change.

“We would like to use this forum to rally the collective action of businesses in coming up with sustainable solutions towards shared prosperity,” Ndegwa said.

Safaricom’s latest Sustainability report titled Partnering for Growth: Transforming Lives, covers the company’s last fiscal year from 01st April 2021 to 31st March 2022 and highlights the progress it has made towards building a more sustainable business.

Key among these is the ‘True Earnings’ bridge, which indicates that the total value Safaricom created for the Kenyan society was KSh 727 billion, approximately ten times greater than its financial profit. This represents a 9% increase from the previous financial year.

M-PESA’s social value increased by 14% to KSh 275 billion, driven by an increase in the number of customers, agents, merchants, and the average number and value of transactions per customer.

“As you will see in the report, Safaricom demonstrated resilience in living true to our commitment to being a sustainable purpose-driven business which has delivered consistent returns to shareholders. Our business continues to contribute towards successfully improving the quality of life for Kenyans across the country by delivering a wide range of products, services, and initiatives that support businesses and communities, ” Ndegwa.

Since 2015, Safaricom has used the True Value methodology to quantify its positive and negative impact on society, the environment, and the economy in monetary terms.

The True Value assessment calculates that Safaricom sustained over 214,000 direct and indirect jobs during the year and if the wider effects on the economy are included, this number increases to over 1.1 million jobs.

The coalition, convened under the UN Global Compact, brings together companies across Africa to help drive more initiatives on addressing pressing sustainability issues—such as human rights, labour, environment, and anti-corruption – on the Continent, ahead of the United Nations Climate Change Conference (COP 27) gathering in Egypt next month.

The ABLC is a member-driven, action-oriented coalition which will collaborate with all relevant parties while remaining strictly independent from any political affiliation or agenda.

Part of the commitments includes taking key actions to meet the goals of the Paris Agreement, supporting Africa’s just transition towards a 1.5°C future to build a thriving continent rooted in a resilient, green, and competitive economy with opportunities for the youth and future generations.

The push also includes creating an enabling environment that facilitates increased access to finance and ensures that African businesses can leverage global markets to accelerate the transition to a future fit economy.

“We are now at a point where even critics have given up denying the reality about climate change. Storms, droughts, and rising sea levels are bleak signs of what we are facing. Today, several parts of world have become uninhabitable because of climate change. That’s why we must all act by individually and collectively pushing for a greener economy,” said KCB Group CEO Paul Russo.

“KCB is taking the lead role to streamline sustainable finance for climate mitigation and adaptation in the region of operation. This a good time to take stock of what we have done, with a view to building on the past and paving the way for future ambition to tackle climate change effectively. To this result, KCB is making deliberate steps in the area of climate action,” he added.

The Coalition also wants the private sector to set and report on credible emission reduction targets in support of the global Race to Zero.