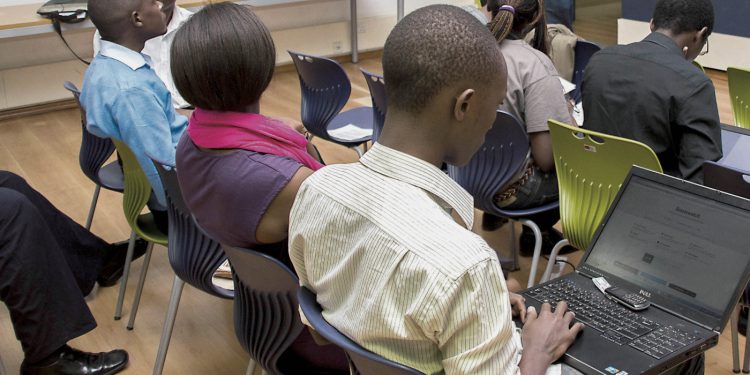 By 2030, tech financing in Africa will hit US$90 billion. African governments have a lot to do to reduce the risk of investing in tech startups. [Photo/Vodafone Institute]

African start-ups only make up 0.2 per cent of the US$3.8 trillion in value around the world.

There is no doubt Africa is a future tech superpower.

The continent’s tech start-up ecosystem is growing quickly, but it still lags behind the rest of the world. Africa has already been at the forefront of using technology which has enabled it to bypass traditional ways of development.

A relatable example is that the continent skipped landlines and went straight to mobile phones, and it started using mobile money and e-banking when traditional bank accounts for individuals was still low. African tech creators are already creating some exciting innovations in the world.

This is because Africa has the world’s largest free-trade area and the highest rate of entrepreneurship. There is a lot of tech potential on the continent, and now is the time to act.

By 2030, tech financing will hit US$90 billion but there is a lot that African governments have to do to reduce the risk of investing in tech start-ups. Governments and donors will have to work with the private sector to create new investment tools.

In addition, governments have to make things better for businesses. Currently, tech start-ups have to pay a lot to comply with regulations that are sometimes not clear. These regulations differ in the 54 different African countries which makes it a lot of work for investors to scale faster across the continent.

To deal with this, leaders in the different African nations need to come up with a common, unified framework that makes it easy to expand into regional markets.

For things to work much better and faster, there is need to get more people to help each other since ecosystems that have more links are stronger and grow faster. African leaders should work on policies that can enable ecosystem players start a Pan-African tech start-up network to help tech start-ups grow and get better.

To address these challenges, African governments need to quickly create and implement a digital economic policy that will open and connect economies and create jobs for the continent’s growing number of young people.

Africa can be a tech superpower if it creates a good business environment, enough money, and strong connections. The future of tech in Africa is exciting and leaders can take steps to build thriving, competitive ecosystems for tech start-ups that lead to innovations that change the world.

Africa’s population remains a boon for the continent’s economic growth.

Before the pandemic, 22 per cent of working-age Africans started new businesses. With the continent being home to the world’s largest free-trade area and a strong culture of entrepreneurship, the only way to go is up.

People in Africa have shown that they are willing to use technology and tech start-ups’ funding on the continent is growing at a rate that is six times faster than the average for the rest of the world.

In 2021, a record US$4.9 billion was raised, which is more than triple the amount in just one year. But this is still a small part of the whole: African start-ups only make up 0.2 per cent of the US$3.8 trillion in value around the world. Africa’s start-ups are still being held back by hurdles like complicated rules, a lack of digital skills, a lack of funding and highly fragmented markets.

All these limitations create rich opportunities investors can tap into to plug the gaps.

By 2025, the digital economy is expected to add $300 billion to Africa’s gross domestic product (GDP). This will provide the much-needed jobs in Africa where people entering the job market outnumber job creation by three to four times. This means that for every single vacancy, there are three to four people qualified to fill it.

Between 2010 and 2019, the tech sector in Nigeria added more to the country’s GDP than the West African nation’s oil and gas sector. In Kenya, the county’s information and communications technology (ICT) sector was on track to contribute up to 8 per cent of the country’s GDP through IT-enabled services and create up to 250,000 jobs by the end of 2021.

But for African countries to get the most out of the tech revolution, they need to make tech, not just use it. Tech ecosystems that are vibrant will see the continent get on a path to digital sovereignty. This means making the technology and setting the rules that will shape the continent’s future, while also driving the fourth industrial revolution.

By making it easier for Africa to innovate and keep hold of world-class tech talent, the continent will be able to control its own digital future.

The 2020 Africa Tech VC Report notes that despite the pandemic, Africa remained the market for venture capital that is growing the fastest. Activity grew by almost half, which is bringing in a greater number of different investors. These investors are investing more often and putting their money on how tech is changing this region and making it more valuable.

Africa is becoming a better place for tech developers. This is according to Google’s Africa Developer Ecosystem Report 2021 which was done in 16 African countries. The report was compiled after interviewing software developers and local experts.

The Google report notes that the demand for African developers hit an all-time high in 2021. This could have been driven by the fact that more small and medium-sized businesses (SMBs) on the continent were using the internet (22 per cent more) thus the need for web development services grew, as did the need for remote development work (38 per cent of African developers work for at least one company based outside of the continent).

This was evident in the huge growth in the number of professional developers in Nigeria, which was expected to add about 5,000 new developers in 2021.

People’s living standards go up considerably because of technology. The continent has numerous opportunities to offer since many Africans are still in need of better services.

Tech innovations can help solve long-standing problems by changing how education and health care are given, making food production better, and keeping people safe from worsening climate crises, among other things.

Read: Tips on fundraising from a startup that raised KSh 4.7 Billion