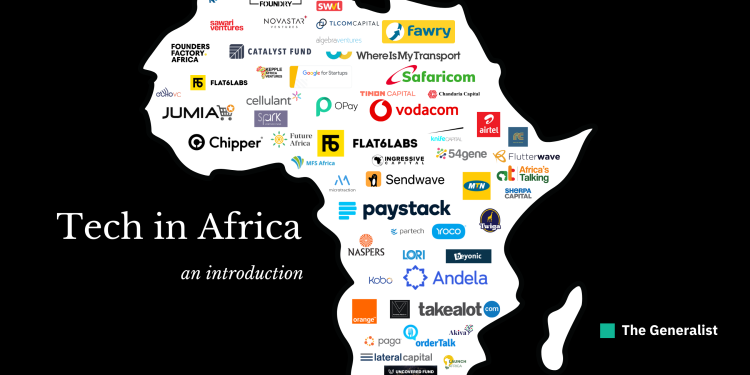 An illustration of tech companies in Africa/ The Generalist

Rapid digitalization is affecting all aspects of life including the way we interact, work, shop and receive services as well as how value is created and exchanged.

When we think about the quality of life, the first thing that comes to mind is the degree to which an individual is healthy, comfortable, and able to participate in or enjoy life events.

A sense of well-being encompasses a wide range of factors, including access to education and employment, as well as the lack of armed combat or threats.

It is also relative, subjective and has intangible components, such as spiritual beliefs and a sense of belonging.

Rapid digitalization is affecting all aspects of life including the way we interact, work, shop and receive services as well as how value is created and exchanged.

This has seen a major improvement in the quality of life across Africa as digitization has provided a cheap, secure source of finance to populations in need and improved government transparency in countries where graft and corruption are a huge concern.

Technological change has also resulted in increased productivity which has in turn improved African’s standards of living.

“Historically, adaptation to technological innovation occurs over long periods of time; however, the rate of that change has been accelerating given the growing use of digital tools across Africa,” a report by the African Development Bank.

According to a study by Lenovo, technology is making the world feel younger, healthier, and more emotionally connected, suggesting a growing relationship between technological innovation and wellbeing.

Information technology has allowed everyone, including some of the poorest and most isolated people on the continent, instantaneous access to current events.

People also now have the ability to see how other cultures and nations live, resulting in a desire to increase their own standard of living from subsistence-level food production to a higher standard of living.

As technology increases productivity, costs of production fall, which means that a worker’s income has more purchasing power resulting in a subsequent rise in people’s standards of living.

The onset of the Covid-19 pandemic forced a lot of Africans to turn to technology to complete simple daily tasks.

This saw a lot of employees conduct their businesses from the comfort of their homes while students took classes via different video application platforms.

Additionally, a lot of shopping was done online with both goods and services being delivered to one’s doorstep while different bills were paid through digital payment platforms.

This was largely made possible through the creation of different platforms across the continent to not only ease doing business but ensure the containment of the pandemic was carried out with utmost ease.

A study by the World Health Organization shows that 13 per cent of all new or modified technology developed to respond to the coronavirus was developed in Africa.

The pandemic accelerated the process of digital transformation and added urgency for Governments to respond by streamlining state processes by digitizing their operations.

The not so good

While technology adoption across the continent has been viewed as inherently good, a key challenge is how leaders will govern and harness the surge in digital data for the global good.

As more of our lives shift online, malevolent actors have more opportunities to exploit digital technologies. More and more African countries are experiencing cyberattacks due to the use of threat actors’ strategies that target people’s worries about working from home in less secure conditions.

More African countries risk being destabilized or limited in their ability to harvest the fruits of the digital revolution. This is evident where African tech hubs such as Nigeria, Kenya and South Africa are growing into centres for cybercrime.

Similarly, even as drones and artificial intelligence offer African countries profound opportunities to innovate, they could be destabilizing without strategies, policies and legal frameworks to govern their use.

The impact of emerging technology could negatively affect the quality of life across the continent if used to enhance corporate profits and regime security without regard to the lives and livelihoods of ordinary citizens.

A report by Brookings notes that the ultimate impact of emerging technologies is dependent, largely, on how governments choose to use them. Due to their affordability and rapid proliferation, AI and drones are offering many African countries the opportunity to reap political, economic and security benefits through early adoption.

However, there is evidence that technological advancements and their usage have had adverse consequences on the planet as a whole. Mental and physical health problems such as eye strain and the inability to concentrate have been linked to the use of mobile devices and social media platforms.

They may also contribute to more serious health conditions, such as depression and anxiety.

Mental health and comfort have not improved over the years as technology has advanced.

A report by Psychiatric Research & Clinic Practice reveals that suicide rates are now higher than ever, especially in developed countries and depression is now one of the most common medical conditions not only in Africa but across the globe.

There have been sharp increases in depression, anxiety, loneliness, self‐harm, suicidal ideation, suicide attempts, and suicide, with increases more pronounced among girls and young women.

“Growing consensus shows that these trends may be connected to the rise in technology use.

Increased digital media and smartphone use may influence mental health via several mechanisms, including displacement of time spent in in‐person social interactions, individually and across the generation, as adolescent cultural norms evolve; disruption of in‐person social interactions; interference with sleep time and quality; cyberbullying and toxic online environments; and online contagion and information about self‐harm,” the research stated.

This is despite the ever-improving medical technology that has already led to lower infant mortality, cures for diseases, and many more improvements in quality of life.

READ: The plethora of the digital world: What works Africa