The President said sustainable climate action is largely about people and their livelihoods adding that no one should be left behind in efforts to combat climate change.

The President who spoke at the Climate Change Summit held on the sidelines of the ongoing United Nations General Assembly in New York said Kenya is fully committed to the fight against climate change. 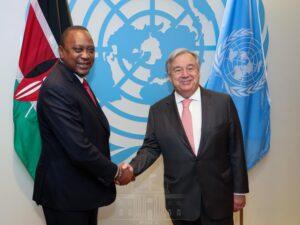 “Our commitment to tackling climate change is deep and arises out of the need to secure our future and that of our children, as we have been victims of droughts and declining rainfall, which have destroyed our lives and livelihoods and which call on an increasing requirement of public resources to address emergencies and disasters,” the President said.

He said Kenya has taken deliberate steps towards meeting its international climate obligations in sectors such as energy, environment and the blue economy.

“In energy we have transitioned our energy sources to renewables to the tune of 90%,” he said on Monday.

“I recently inaugurated our largest wind power farm on the continent at Lake Turkana and we shall continue to prioritise our energy developments from geothermal and other natural sources,” President Kenyatta said.

The Head of State said renewable sources have enabled Kenya to expand electricity connectivity from less than 30 per cent in 2013 to 75 per cent over the last six years.

In forestry, the President said Kenya aims to plant two billion trees to achieve the global threshold of 10 per cent tree cover by 2022.

“This is in addition to the global commitment to restore 5.1 million hactres as our national contribution to the African Forest and Landscape Restoration Initiative,” the President told fellow world leaders.

He said Kenya has partnered with the private sector to expand access to alternative sources of household energy especially for urban poor and rural populations with a target of transitioning 80 per cent of households from biomass sources.

President Kenyatta has urged world leaders to develop joint interventions for sustainable utilization of ocean resources. He said no nation can sustainably manage oceans on its own since 2/3rds of global waters lie in Areas Beyond National Jurisdiction of Economic Exclusive Zones pic.twitter.com/4SH8qcewSk

READ ALSO:Kenya has one of the best solar radiations in the world- Lean Energy Solutions MD

President Kenyatta who spoke on the theme ‘Live, Work and Move Green’ said Kenya will continue championing the ‘Building Climate Resilience for the Urban Poor’ initiative, an intervention developed by Brazil and UNHABITAT.

The multilateral initiative seeks to build climate resilience among 600 million vulnerable people by 2030.

Shortly after the Climate Change Summit, President Kenyatta joined other world leaders for a dialogue with the UN Secretary General Antonio Guterres on counter terrorism where he restated Kenya’s support for the Christchurch Call, a global initiative spearheaded by France and New Zealand that is aimed at stopping the use of internet to propagate violent extremism and terrorism.

“I commend France and New Zealand for spearheading the Christchurch Call. I also salute related efforts to combat terrorist exploitation of a free, open and secure internet that have been made at the Aqaba Process, by the European Union, the G7 and G20,” he said.

“Kenya stands in support of this initiative. We will deploy our national frameworks to ensure that Kenyan companies that provide online services become engaged with the Christchurch Call and its commitments,” the President assured.

He said the world is experiencing an unprecedented trust deficit that has led to the widening of social and political divisions along ethnic, racial and religious lines.

These divisions, President Kenyatta said, are threatening societal cohesion and tolerance, values that are critical to co-existence and democratic progress.

“We must engage the hard work of building bridges to close these cleavages and squeeze out extremism,” the President advised.

“Without this, we give extremists an opportunity to drive their message, through the appropriation of technology, more efficiently and discreetly,” he added.

President Kenyatta said Kenya is ready and willing to share its experience of the Building Bridges Initiative (BBI) that is aimed at bridging the divide in its internal politics.

“Our Building Bridges Initiative is a bold bipartisan approach that is organically forged to foundation reforms that will guarantee our unity as a nation.

“Beyond the political arena, the BBI sets the stage for building bridges between individuals, genders, communities and regions.

“I believe this offers a unique opportunity to build successful counter extremism and counter terrorism initiatives,” the President offered.

The President said the opportunity for Kenya to share its building bridges experience with the rest of the world was partly the reason why the East African country had put forward its bid for a non-permanent seat on the UN Security Council.

“This is also why we have put our candidature for the UN Security Council in 2021-2022.  We are keen to build bridges between the various peace and security structures, regions, and forge interface between peace, security and development,” President Kenyatta concluded.

Martin Mwita is a business reporter based in Kenya. He covers equities, capital markets, trade and the East African Cooperation markets.