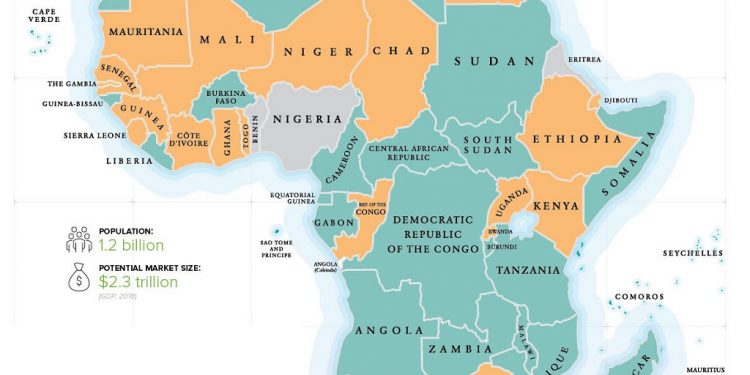 Warning bells are being ignored over Africa’s rising debt making it not if but when Africa crumbles under the pressure to repay these loans.

Public debt in nearly half the sub-Saharan African countries is now above 50 per cent of Gross Domestic Product (GDP).

Concerns regarding the continent’s present debt arise from the fact that it has risen sharply in a very short space of time.

However, Africa’s public debt has not yet reached the proportions that triggered the Highly Indebted Poor Country (HIPC) initiative.

AERC adds that Sub-Saharan Africa is slipping into a new debt crisis. 40 per cent of the region’s countries is now at high risk of debt distress. This is double the proportion of five years ago.

The number of countries already unable to service their debts has doubled in the past year to eight. The IMF is urging African countries to increase taxes to provide more scope for paying interest.

Countries like Chad, South Sudan, the Republic of Congo and Mozambique have moved into “debt distress” according to AERC.

The problem, AERC adds, arises since most countries in sub-Saharan Africa are being hit because they had borrowed in foreign currencies. These countries are finding it hard to finance the debt after a significant depreciation.

There have also been gloomier syndicated loans and bilateral debts, many to China, which has over USD60 billion on offer and tied to big construction projects.

“Much of Africa has a shallow domestic market and no country in the world can self-finance,” says AERC.

The African Development Bank (AfDB)’s Simon Mizrahi, however, disputes that the debt issue is at a crisis level.

He says that despite the fact that Africa’s debt has increased in recent years, it is “not to unsustainable levels”.

Conversely, Mizrahi calls for caution saying, “We need to continue to generate financing and spur growth without increasing debt.”

Mizrahi hails the African Continental Free Trade Agreement (AfCFTA) saying it is ushering in a new era in intra-African trade.

AfCFTA paves the way to the world’s largest free trade area with an integrated market of 1.3 billion consumers.

“This is important because Africa will struggle to be competitive at the global scale if it continues to operate as 54 fragmented economies. The continent needs to be more integrated, it needs larger economic spaces so that Africa can attract more investors, create more and better jobs, boost internal trade and create continent-wide value chains that are globally competitive.”

AfCFTA is expected to boost cross-border infrastructure, drive competitiveness and make the continent a more accessible place by integrating markets.

AERC says that the rules for how to handle Africa’s debt crises are changing.

“In the past, much of the money was owed to the World Bank, IMF and Paris Club, an informal group of Western government creditors.”

This, AERC notes, gave the fund the power to demand prudent economic reforms as a condition for help.

Now China’s influence has risen and it puts much less emphasis on good governance.

Unlike previous debt crises where the IMF and the World Bank played a leading role, this time the creditors are mostly commercial entities or state financial organisations.

“So, care is needed as they have little appetite for write-offs or restructurings.”

AERC advises that there is a need for austerity measures if sub-Saharan Africa is to move to prosperity.

“Countries can for instance scale down on infrastructure, even though there still exists a huge infrastructure gap in the region. We should have a low-income countries’ debt model,” proposes EARC.

To address the debt issues, AERC says that to get out of this syndrome, hidden debts that the IMF/World Bank cannot track should be identified and dealt with.

“The fact that the structure of public debt has changed over the years calls for innovation, for instance, re-profiling and selling the debt at the stage of roll over. This reduces cost if the exchange rate does not go through the roof,” the consortium opines.

Noteworthy also is that the quality of some debt contract is skewed and should be addressed going forward. Also, non-concessional loans can be replaced with concessional ones while creating a strong fiscal policy in Africa.

AERC calls for deepening of domestic financial markets and have the World Bank and IMF mainstream budget support to some countries already in deep trouble through their poverty reduction programmes to relieve some debts.

“There is the need for behaviour change to diminish appetite for loans among African government leaders,” AERC cautions.

Chinese loans and locking Japan out of Africa

With an external debt of around USD300 billion in 2009, African countries spent about 16 per cent of the continent’s export earnings on servicing their external debt.

As of 2011, the annual Chinese loans to the African governments was USD10 billion. In 2014, the figures indicated USD15 billion-year loans with 2016 recording a USD30 billion high.

Japan’s worry is the big external debts that most African countries have accumulated in their pursuit of economic growth.

This financial burden in the form of loans continues to raise eyebrows of potential financiers as governments may fail to pay back the money.

As a result, it has become difficult for African governments to borrow more or ask for financial extensions.