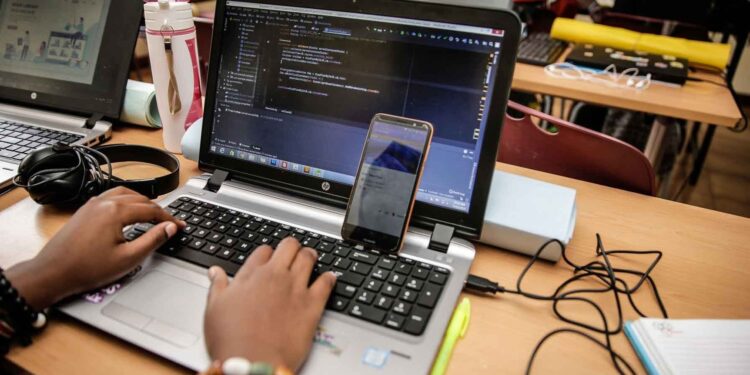 African women in STEM. The International Day of Women and Girls in Science is an opportune occasion to empower them. [Photo/AfBD]

It is a significant day to empower African women and girls to pursue STEM studies and careers, advocate for inclusivity and diversity in STEM disciplines.

by june njoroge
in Africa, Tech & Business
0
Share on FacebookShare on LinkedIn

The International Day of Women and Girls in Science is an opportune occasion to not only celebrate African women and girls leading the continent in Science, Technology, Engineering and Mathematics (STEM), but also to empower and demolish systemic hurdles thwarting their full blossom, in cognizance of their pivotal role in the coming age of the fourth industrial revolution, that will be marked by science and technology; achievement of the UN Sustainable Development Goals (SDGs) and Africa’s Agenda 2063.

According to the UNESCO Science Report, women account for only 33 per cent of the world’s researchers, still occupy fewer senior positions than men at top universities, and only 12 per cent of members of the national science academies are women.

This is despite the fact that women represent 45 per cent at the bachelor’s, 55 per cent at masters and 44 per cent at PhD levels of study respectively. Hitherto, women and girls have only won 23 of the 631 Nobel Prizes in science and are still a minority in science-related studies and fields.

Read: Internships in Africa, how companies could stem unemployment tide

In addition, 70 per cent of health and social care workers are women and are paid 11 per cent less than their male counterparts, and receive smaller research grants than them, for instance in artificial intelligence where just one in five professionals is a woman.

The 2022 theme for this global awareness day is “Equity, Diversity, and Inclusion: Water Unites Us” and will mark the 7th celebration since inception in 2015. It is a significant day to empower African women and girls to pursue STEM studies and careers, advocate for inclusivity and diversity in STEM disciplines, inspire African girls by showcasing women role models in innovation, mobilizing partners to promote gender equality in the field of science such the renowned L’Oréal-UNESCO Women in Science Programme, that seeks to recognize women researchers whose contributions continue to overcome today’s global challenges.

Africa’s Agenda 2063 advocates for ‘Well educated citizens and skills revolution underpinned by science, technology and innovation under aspiration two, and an Africa that is people-driven, relying on the potential offered by African people especially women, youth and caring for children, under aspiration six.

Into the bargain, Goal 6 of the UN SDGs advocates for gender equality in all spheres of life. Inarguably, both recognize girls and women as eminent actors in Africa’s development, but gender disparity is still an existential roadblock in a continent where most cultures are patriarchal.

The 7th International Day of Women and Girls in Science Assembly will take place virtually from the UN Headquarters in New York, bringing together women in science and experts from around the world; from high-level government officials, representatives of international organizations and the private sector, to discuss the water nexus in attaining sustainable development, pertinently with a view of accelerating progress towards the achievement of SDG 6 on clean water and sanitation.

In light of this year’s theme, the UN reports that by 2030, billions of people will have severe water stress characterized by the lack of access to safely managed household drinking water, sanitation and hygiene services, unless the issue is redressed.

Efforts by Cansu Global shall also be highlighted in its commitment to provide leadership in science-based solutions; to complex water challenges in order to further economic prosperity, social justice and environment integrity.

Cansu Global is a programme that was launched by the Royal Academy of Science International Trust (RASIT), as a conduit to fulfil its commitment to the UN International Decade for Action on Water for Sustainable Development.

Undoubtedly, numerous actions have in the past been taken to promote women’s participation and leadership in science, such as the declaration by the AU of 2015 as the ‘Year of Women’s Empowerment and Development Towards Africa Agenda 2063’ and the adoption of the Science, Technology and Innovation Strategy for Africa-2024.

Similarly, cognizant of women’s participation as key to driving growth and development in science, technology and innovation; regional organizations in Sub-Saharan Africa have taken steps to advance women’s participation in science. For instance, the Southern Africa Development Community (SADC) launched a gender policy that supports equal access for girls and boys to science and mathematics education, as well as access for women and girls to tertiary education in non-traditional subject areas, hence encouraging women’s involvement in science.

The Kwame Nkrumah Regional Award for Women Scientists was launched by the Economic Community for West African States (ECOWAS), to recognize contributions of women in Science, Technology and Innovation (STI), in member countries through the AU.

State of Water Security in Africa

Taking into account the 2022 International Day of Women and Girls in science; it’s imperative to assess the state of Africa’s water security which needs to be urgently addressed.

Africa is bearing the brunt of the climate change crisis, yet had no hand in its creation only contributing a paltry 4 per cent of the global greenhouse gas emissions; spelt by the numerous natural disasters from floods, drought and famine, locust infestation to tropical cyclones, which have put significant water stress in the continent.

In a series of initiatives, African leaders are spearheading strategies for resolving the quandary pertinently its impact on Africa’s water security and sanitation. Nearly 63 per cent of urban areas in Sub-Saharan Africa lack access to basic water and sanitation.

The African Development Bank (AfDB) estimates that US$64 billion will be needed annually to meet the continent’s water-related needs, yet currently, investments in water infrastructure in Africa each year range between US$10 and US$19 billion.

In an effort to seal the deficit, the AU adopted the Continental Africa Water Investment Programme (AIP), with the key objective of accelerating investment in climate-resilient national, transboundary and regional water infrastructure that comprises irrigation systems, dams, sanitation facilities and water management information systems. The programme is projected to create at least five million jobs and garner US$30 billion of investment in the priority areas.

The 2021 World Meteorological Organization’s ‘State of Climate Services’ report indicates that in the past five decades, Africa was hit by 1695 disasters related to the weather, water and climate. In addition, 5 per cent of Africa’s GDP is lost every year due to water scarcity, with the MENA region experiencing the greatest economic losses from climate-related water scarcity, projected to range between 6 per cent and 14 per cent respectively by 2050, according to the World Bank.

The “Africa Water Vision for 2025” document that guides African countries in shaping water policy and programmes; launched by the AfDB highlights that inadequate access to water and sanitation is a leading cause of numerous diseases, consequently resulting in economic loss and extreme poverty. The Water, Sanitation and Hygiene (WASH) initiative, being pursued by SADC with the support of the Global Water Partnership (GWP), is also vital in advancing critical water-related goals, whilst facilitating intra-regional trade.

Another integral initiative is the Water Investment Scorecard, a data-driven approach that by tracking progress will aid in keeping decision-makers in check, by sustaining the required pressure.

The UN member states are also proactive, for instance, Portugal in partnership with Kenya are organizing a High-Level Symposium on Water in Lisbon; during the 2nd Ocean Conference from 27th  June to 2nd July, a gesture to promote an integrated vision of the water cycle.

Bridging the Gender Gap to Promote African Women in Science

Most African cultures are patriarchal in nature and view women as inferior to men, this has led to long-standing bias and gender stereotypes, that have steered girls and women away from science-related fields; thereby widening the gaping gap that has persisted throughout the years at all levels of STEM disciplines.

In reiteration, the UN notes that the aforementioned, hinder many girls and women from taking up and prevailing in science careers across the world. Albeit many Sub-Saharan African countries have enacted STI, inculcated gender-related objectives aimed at promoting women’s participation in science, they are rarely made a reality.

Retrogressive cultures such as early childhood marriages, FGM, among many others have led girls to drop out of school; coupled with unwanted pregnancies, sexual harassment and gender-based violence. Statistics reveal that the school dropout rate is higher for girls at 30 per cent as compared to boys at 15 per cent.

Learning institutions should inculcate different activities in their curricula to inspire young girls to take up STEM disciplines; such as holding science fairs, watching short documentaries of outstanding women scientists, better yet inviting them to give talks and mentoring them to succinctly show that it’s possible.

Policy, institutional and individual factors, embedded within institutions that create challenging work environments for women scientists; additionally contribute to the severe underrepresentation of African women in science. Lack of gender-friendly policy frameworks is also a leading cause to the status quo, such as the provision of child care facilities at the workplace, and career re-entry programmes thereof, to encourage women scientists to resume their careers after taking maternity breaks.

Gender-sensitive promotion policies should be implemented to ensure women do not abandon their science careers, but rather attracts, retain and advance this less travelled path. Lack of career support, networks and professional development opportunities, coupled with societal expectations such as raising a family over pursuing a career; dissuades many from seeking a future in science, as they often find themselves in a dilemma trying to find a balance between family and career.

Time is ripe to thwart existing stereotypes and bolster recognition of women’s contributions; as they have spearheaded groundbreaking research in innovative technologies and continue to push the envelope for more.