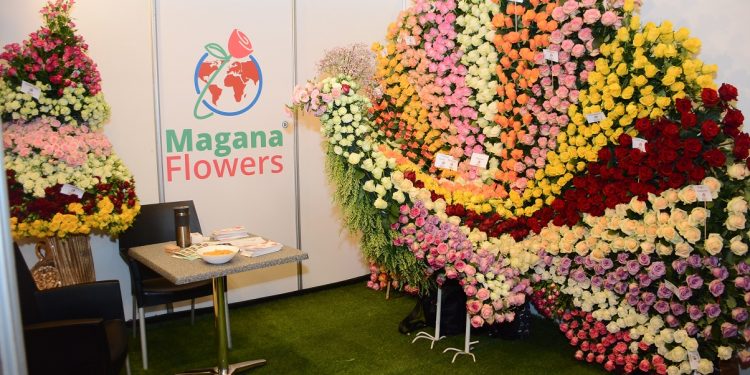 A Magana Flowers stand at the just concluded International Flower Trade Expo, IFTEX. The company is rebranding to get new markets, customers and staff. [Photo/Magana Flowers]

by Njenga Hakeenah
in Africa, Agribusiness, Kenya
0
Share on FacebookShare on LinkedIn

Kenya is the fourth largest exporter of cut flowers in the world with the floriculture industry earning the East African nation more than USD800 million in 2017.

The Netherlands is the major exporter of cut flowers accounting for 55 per cent of trade. It is followed by Colombia at 18 per cent, Ecuador (9 per cent) and Kenya (6 per cent).

Germany, USA, UK and the Netherlands are the world’s major flower consumption markets at 19 per cent, 17 per cent, 16 per cent and 13 per cent respectively.

As of 2017, Kenya’s flower growers were exporting 36,000 tonnes of flowers through the Kenya Flower Council.

In the first four months of 2018, flower farms in Kenya exported cut flower valued at KShs42.6bn (USD423m). According to data from the National Bureau of Standards at the end of June that year, this was a recorded 40.4 per cent increase over the same period in 2017.

Where Kenya’s flowers are grown

Most flower farms in Kenya are located in Naivasha with an estimated 1200 hectares under flower cultivation. 70 per cent of this land is used to produce the rose flower alone.

The cut flowers industry in Kenya employs about 100,000 people directly while indirectly benefitting over 500,000 people. Overall, the floriculture industry impacts over 2 million livelihoods.

The biggest market for Kenya’s cut flowers is the EU.

Germany, the Netherlands, the United Kingdom, France and other EU countries are the primary EU markets for Kenya’s flowers. However, new markets are currently opening up with lots of potential.

These markets include China, the United States, the UAE, Japan and Russia.

Interestingly, the local market is supplied with flowers that do not make it to the export grade.

Kenyan flower farms are exporting more and more cut flowers to China as the demand increases.

Jiuye Supply Chain flower department director Qi Bo, says they introduced flowers from Kenya because of the vast number of varieties grown there. This includes some varieties that cannot found in other regions.

In an interview with CNN last year, Bo said demand for flowers from Kenya to China was growing at 25 per cent yearly.

The company expected to double its imports to five million in 2018.

Bo said that China’s flower industry is very far behind Kenya’s since it started late.

Kenya controls a 38 per cent market share of the EU making the country the lead exporter of rose cut flowers to Europe.

In the United Kingdom, for instance, supermarkets are the main retailers of flowers grown in Kenya.

To capture new markets, Magana Flowers is realigning its business as it rebrands in time for its 25th anniversary.

The company seeks to reposition itself in the international flower markets.

Among the changes include a change of logo, renewed focus on direct marketing and dedication to customers, stakeholders and the over 500 staff it employs.

This comes as global markets and dynamics in the industry continue to change dictated by changing customer preferences, technology and weather.

“There will be an enhanced ecosystem between the farm and customers with a good flow of communication and overall enhanced customer experience,” said Ambanya.

“We are promising to enhance cooperation with our suppliers, breeders, the community and regulatory agencies like the Kenya Flower Council, Kenya Plant Health Inspectorate Service (KEPHIS) and Horticulture Crops Directorate,” Ambanya added.

At this year’s UN Commission on the Status of Women in New York, employers were accused of failing to adhere to and practice corporate accountability.

Violations and abuse are prevalent on flower farms globally and in Kenya, it is due to the failure to observe good practices. This leaves many workers, especially women, to be violated with impunity by their companies and colleagues.

One of the major reasons driving this state of affairs in Kenya is the government’s bias to protect the interests of investors than those of the workers.

Another issue that arose at the Status of Women (CSW) event by the UN Commission was that many of these farms are owned by powerful people. These owners happen to be in government making them untouchable and disadvantaging the workers.

The CSW heard that political interest in ownership or directorship of the horticultural businesses contributes to the states failing in their duty to protect workers’ rights. This incapacitates the government against demanding corporates to respect workers’ rights in line with the United Nations Guiding Principles.

According to Fairtrade, the flower industry employs a largely female workforce of poor, less educated and therefore vulnerable workers.

It has long had a reputation for poor working conditions including low pay, overcrowded housing and repression of trade unions.

Over the past years, conditions have vastly improved for workers in many countries, but there are still challenges. 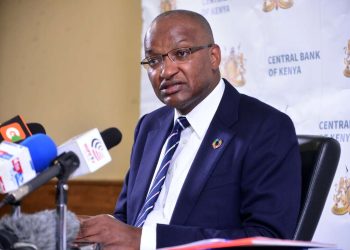