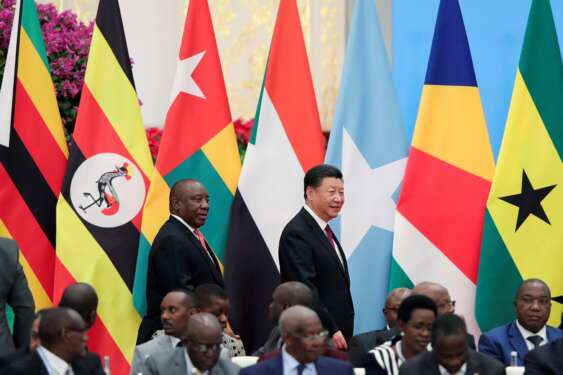 Chinese President Xi Jinping and South African President Cyril Ramaphosa attend the 2018 Beijing Summit Of The Forum On China-Africa Cooperation - Round Table Conference at the Great Hall of the People in Beijing, China September 4, 2018. Lintao Zhang/Pool via REUTERS - RC14FFE63BA0

African Governments are selling land to the Chinese, yet Africans are prohibited to purchase in China

by Mustapha Juma
in Africa, Business, Countries
0
Share on FacebookShare on LinkedIn
The presence of China in Africa has increased rapidly over the years, as measured by the number of Chinese living in Africa, or the quantity of trade, aid and investments.
However, the presence of the Chinese in Africa has caused an uproar, with some people claiming that they have been grabbing land in Africa.
This, according to reports, has been necessitated by the willing of African leaders to sell land to the Chinese, when Africans are not allowed to purchase the same in China.
A video posted on YouTube by one of the Africans has highlighted how the Chinese are easily owning property in Africa when Africans are prohibited from buying the same in China.
The video seen by this writer, on a YouTube channel dubbed United States of Africa, highlights some of the reasons why the Chinese own apartments in Africa, while Africans are not allowed to make a similar purchase in China.

Africa and China are two giants in the international system: Africa is a continent of about 30 million square kilometres in which over 1.1 billion people live in 54 different States and its population is of about 36 people per square kilometre.
On the other side, the other giant is represented by China, a single State covering a 9.6 million square kilometres surface giving home to about 1.36 billion people. Its population density is of 145 people per square kilometre.
The first difference is on the economy side and its development: Africa, with its 54 countries and all its differences, can be considered a developing continent while China, thanks to its reforms introduced in the late 1970s, can be considered as a country with a transition economy.
In this case, the creator of the video argues that the Chinese government is trying to reduce its population by ensuring that its nationals who make ways to Africa settle their permanently.
Therefore, Africans cannot be allowed to settle in China, when its government is trying to settle some of its nationals in Africa.

China has been putting up several projects in Africa. In Kenya, the Standard Gauge Railway is operational, with the Nairobi Expressway taking shape.

Also Read: What to expect as Nigerian takes over as WTO director-general

In the following years, the ties between the two actors got closer and closer: in 2003 Chinese investments in Sub-Saharan Africa counted for 68 million dollars, that soon became 6.48 billion in 2008, about 33% of the total amount of investments.

China has a very strong presence in this part of the continent because of the huge amount of raw materials needed by the Chinese economy, but also because this part of the world is an enormous market composed by millions of potential consumers and thousands of infrastructures to build.

On the other side, China offers all that is needed, from technology to clothes, passing by infrastructures: scooters, bikes, radios and many cheap products that have a low level of technology but that allow African people to reach a basic level of consumption.

We must also say that Africa’s exports to China have been growing from less than 1 billion dollars in 1990 to almost 15 billion in 2004.

Before 2010, China became Africa’s most important trading partner and it is important to highlight the fact that both actors gain befits from this relationship because, in the balance of payments, the exports are almost the same of the imports.

While all countries of the world want to be paid with cash for the materials and the help they offer, China accepts to be paid also with natural resources, such as raw materials like crude oil, copper, iron and wood.

China has the world’s biggest population, about 1.36 billion people, in the period 2000-2006 its GDP growth rate has been among the highest in the world, about 9.6%, but the country does not have enough arable land for its enormous population.

This country alone counts for 20% of the world population, yet it owns only 8% of global farmland. For this
treason, one of the most urgent needs is to secure itself arable land and reduce as much as it can its dependency on the import of food.

With Deng Xiaoping, during the 1978-1984 period began the reform for the agriculture sector, the aim of which was to increase China’s limited productivity.

The first step of this important revolution had to come from agriculture that played a key role in the country’s economy, and, in particular, it has been the one of separating the price: part of the production could be kept for the ones that could sell their products on the market.

People working in the agriculture sector could keep some money, and this was meant to push to a new form of domestic demand.

In the following five-year plan, the urban industrial sector was involved and the important thing was that from that moment on, firms were allowed to keep the profit.

China has a high number of state-owned companies and of private ones but it is not always easy to draw a distinction of the two.

Anyway, since 1998 many private enterprises rose, from less than 10% of total industrial enterprises to almost 50% in 2005.

The country’s 9 biggest companies produce 69% of total profits and they are involved in the sectors of oil, communication, steel, coal and energy.

However, Chinese companies and its State have already purchased lands for 3 million hectares, an area wide as the Italian regions of Lazio and Abruzzocombined together.

The first direct contacts between China and the African continent can be dated back to the half of the 20th century when on October 1st 1949, there was the birth of the People’s Republic of China (PRC).

Since the beginning, it was politically isolated, mostly because the U.S. didn’t want to recognize the new-born State because of its fear for communism to spread in the whole area.

For this reason, during the Fifties, China began to create some sort of connections with the independent African states.

The first ties between these two actors were political ones. Over time a lot has changed and the links among them moved from the political plane to the economic and business one: in October 2000 Beijing hosted the first Forum on China-Africa Cooperation (FOCAC), a meeting between Ministers for Foreign Affairs and the ones for Economy and Finance. 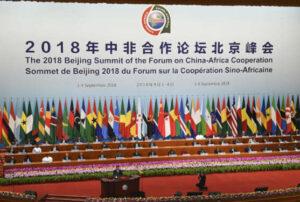 In 2001, China entered the World Trade Organization (WTO) and thanks to this, its exports began taking off: in 1970 it counted for 1% of global export, in 2010 was counting for 10%, becoming world biggest exporting country.

To be more precise, China has had an explicit “Going Out” policy since 2001 as part of business development (rather than food security) strategy.

The central government has encouraged its firms to invest abroad, partly to secure access to resources where Chinese demand outstrips domestic supply, and also to build robust international companies capable of competing in key sectors with leading established multinationals.

This policy has been supported by a range of incentives such as tax breaks, credit, low-interest loans and customs preferences, allied to high-level diplomatic support.

The focus of this activity has been strategic SOEs, which Chinese policy-makers see as capable of rivalling established multinationals.

Also Read: Inside the booming business of digital news curation

However, in theory, smaller companies investing in land may also be able to access government support. The China-Africa Development Fund set up by China Development Bank to finance China’s development programme in Africa is actively looking for opportunities to support Chinese agribusiness development on the continent.

China’s population suffers from a severe shortage of suitable farmland because 2/3 of chinas territory is arid grassland and desert, with climate change worsening the situation.

As a result, it is no surprise that Beijing is calling for Chinese firms to engage in land grabs for arable farmland in foreign countries, starting in 2011, with the minister of agriculture saying “the time is ripe for the country’s agricultural companies to embark on a ‘go outward strategy.”

In Africa, such land grabs are even more possible today since two million Chinese live in the continent.