The deal further adds to an already cumbersome debt crisis. Zambia has already defaulted on debt obligations. A worsening debt crisis coupled with a pandemic has led the country to a precarious debt situation. The country became the first African nation to default on debt in the pandemic period, stoking fears that there could be a ripple effect of defaults across the continent.

As part of the agreement, ZCCM will pay Glencore creditors from Mopani Mine’s revenue. Initially, a payout of 3% of income will be paid up to 2023. After which revenue payouts will rise to 10 -17.5%.

The deal also stipulates a quarterly interest payment of LIBOR+ 3%. Zambia’s mining corporation will also be required to pay  33.3% of EBITDA.  All copper produced at Mopani will remain in the hands of Glencore until ZMCC pays the debt in full. It is estimated that it will take over ten years to repay the debt.

The rationale behind the transaction

With the current situation in Zambia as the country seeks engagement with the IMF to help alleviate the debt crises and court creditors for further negotiation, one would wonder why it would add to the debt burden. Some possible explanations include:

Mining in Zambia is a significant contributor to economic output and a major employer. Glencore had stopped production at the mine amid threats from the government to resume operations or lose its license. Perhaps the move is meant to continue mining operations while keeping workers employed as a means to alleviate coronavirus induced suffering. 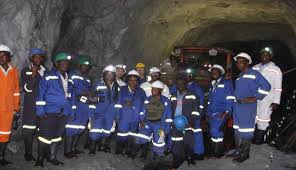 Another school of thought holds that the move is an attempt by the incumbent president to garner votes in the mining Copperbelt as the country gears for presidential elections in August. The deal would be touted as a nationalization deal to bring back control of mines into the hands of the people from the foreign owners.

With the current state of affairs, popular support for the incumbent political party might be waning as the debt crisis has led to ripple effects in the economy, including inflation and power cuts. As such, the move could simply be an effort to gain endearment from the electorate.

Another possible rationale could be a myopic attempt to stimulate mineral production in the short term hope of driving economic activity. While the intention might be to find another entity to take over, there is the question of the labor bill that the government has indirectly inherited, putting additional pressure on an already shrunken fiscal position.

Regardless of its reasoning, piling up more debt may result in severe repercussions for the struggling nation. With commodity prices already volatile, more debt could spell a weaker currency inducing increased inflationary pressures.

Further, it makes it increasingly difficult to negotiate good faith debt restructuring and concessions. Moreover, there are fears of accumulating more Chinese debt as risk factors push the country further away from traditional debt metrics.

What next for Zambia?

Zambia is no stranger to inflation and economic struggles. It is critical for the country to address its debt position to prevent heading back into the 90s era inflation. Already, the country’s debt is roughly $12bn (approximately 80% of GDP).

In addition, the International Monetary Fund (IMF) projects the economy to contract by a figure just shy of 5%. To add to the country’s woes, the local currency, the kwacha, had depreciated by over  30% in 2020, and inflation is projected to hover around 13.50%, according to Trading Economics. These metrics speak to an urgent need to remedy the situation.

The economy will take center stage in the race for the presidential office. Whatever the outcome of the election, the leader will have a lot to contend with economically.