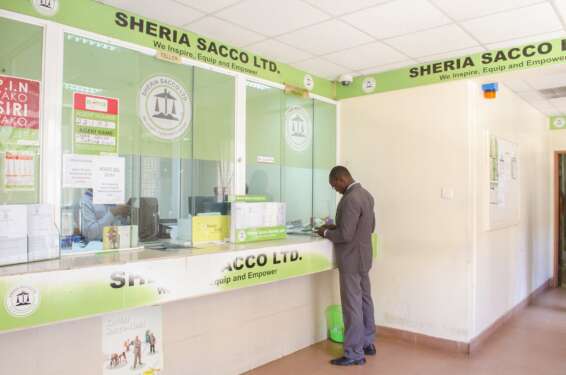 A SACCO customer in the banking hall. Kenyan SACCOs have weathered the coronavirus jitters to remain profitable. [Photo/Bizna]

SACCOs make up approximately 5.55 per cent of Kenya’s GDP as of 2018 according to the Kenya Financial Sector Stability Report 2018 by the Central Bank of Kenya.

According to the SACCO subsector Demographic Study Report, 2019; The SACCO sub-sector has a total population of slightly over 4.97 million natural persons as well as corporate or institutional membership among the deposit-taking – SACCOs for the period ending December 2018.

Fund manager, Cytonn, notes that historically, a number of SACCOs have experienced challenges that have stunted the growth of the SACCO movements such as non-remittance of dues by employers, mismanagement of funds by officials, and failure of members to pay back their loans among others.

However, the novel coronavirus has taken unprecedented and most likely the largest test to the survival of SACCOs. In just two months, the effects of the pandemic are not only being felt in the healthcare sector across all sectors of the country’s economy. Sacco societies have not been spared.

So, what are some of the effects that co-operatives have experienced from the novel coronavirus?

The economic downturn after the first case was announced in Kenya has had a ripple effect on employment and businesses. Many employees have gone on unpaid leave or have been affected by pay-cut while many businesses have either recorded losses or have been completely shut down. This has resulted in many Sacco members withdrawing their savings to cater to their needs.

The Cooperative Alliance of Kenya has also urged Saccos to reconsider suspending interest on the loans taken by their members due to the economic downturn. As a result, this has affected the liquidity of Saccos.

As is the norm for Sacco events, the first half of the year, the board members usually meet the Sacco members to discuss the performance of the Sacco in the concluded financial year. The ministry of Co-operatives, Industry, and Trade announced the indefinite postponement of AGM’s. The societies that were yet to do their AGMs paid their dividends nonetheless.

Increased Use of Online Services

The societies that had moved their services online are now leveraging on their investment as many members can access services at their convenience. There has been an increase in the use of online services as many people are encouraged to stay home to flatten the curve.

There is a need for Saccos to come up with effective risk management strategies to ensure that their financial resources are not affected in case of any unforeseen circumstance. The risks should be prioritized and practical plans to be made on how to deal with any arising circumstance.

Despite the adverse effects witnessed from the novel coronavirus. SACCOs can still survive the pandemic by prioritizing their expenditure and cutting costs where they can. And for the SACCOs that are yet to leverage on technology, this is the ideal time to start.

Read: Into the black hole of COVID-19: impact on co-operatives

SASRA CEO John Mwaka says that a number of SACCOs were adversely affected by job losses, pay cuts and unmitigated shifts in the financial priorities of households, which relegated loan repayments to the back burner. But they have shown great resilience, which ensured stability in the sub-sector.

He adds that SASRA formulated and implemented a number of measures to cushion the SACCOs they currently regulate.

Among the measures that SASRA implemented to cushion SACCOs against the adverse effects of the COVID-19 pandemic were the suspension of AGMs last year; online approval of SACCO’s audited accounts and allowing SACCOs to restructure member loans.

The sub-sector regulator also reviewed the frequency of submission of liquidity and risk classification and asset provisioning returns.

Most adversely affected by the pandemic were SACCOs that operate in businesses that rely on local and international travel, the first and biggest victims of the initial restrictions imposed by governments the world over, including Kenya, to stem the tide of infections, mid-last year; Aviation, Hospitality, Transport and Horticulture.

With the Regulations 2020 which came into effect from January 1 this year, SASRA aims at bringing prescribed Non-Deposit Taking SACCOs under the regulatory ambit.

These NDT SACCOs, which SASRA estimates to be around 400, have till June 30, 2021, to register their particulars with the regulator.

The success of the SACCOS has seen them move closer to implementing an inter-Sacco lending market which will see them eventual integrating into the National Payments and Clearing system. This step means that SACCOs will leave Kenyan commercial banks staring at close to Ksh2.33 billion (US$21.37 million) loss in interest income from the co-operatives sector.

SASRA is working with a multi-agency team including Treasury, the State Department of Co-operatives, Central Bank of Kenya (CBK) and the Kenya Law Reform Commission (KLRC), where they have already drafted the legal framework for the operationalisation of the Central Liquidity Fund (CLF).

Under CLF, SACCOs can lend and borrow money from each other thus cutting out banks whose loans are said to be expensive.

Once implemented, SACCOs can lend and borrow from each other at reasonable rates within their own inter-Sacco market.