by Njenga Hakeenah
in Business, Investing
0 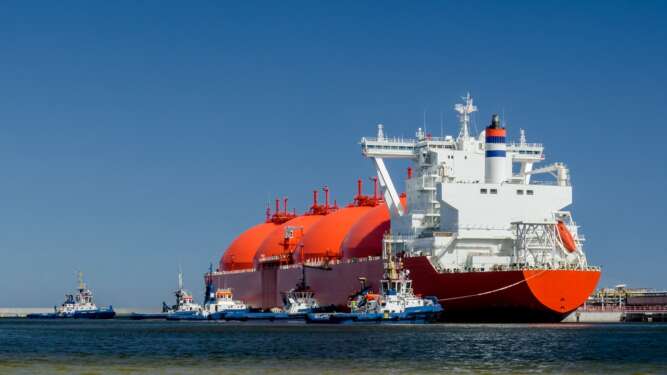 An LNG tanker. The decarbonisation component of LNG represents key drivers of LNG-to-power projects across the continent. [The Market Herald]

A total of 70 natural gas projects were projected to come online in sub-Saharan Africa between 2019 and 2025.

Final investment decisions will be made on competitive feed gas supplies and low upstream, plant construction and transportation costs, to avoid project delays or cancellations in a cost-sensitive environment as the continent aggressively pursues its share of global liquefied natural gas (LNG) supply.

East, West and South Africa are the emerging markets that are gradually becoming major contributors to the production of liquefied natural gas and compressed natural gas for use in power generation and transportation.

A report by Africa Oil & Power (AOP) shows that the appeal of natural gas as a viable energy source has grown rapidly over the past decade. The primary drivers of this demand include reduced costs in comparison to traditional fossil fuels; mounting pressure from the global energy transition; and the growing demand for alternative power generation solutions across Africa.

Accordingly, the emergence of both Liquefied Natural Gas (LNG) and Compressed Natural Gas (CNG) markets has been driven by increased investment, in a bid to address energy security, diversification and electrification challenges.

The Africa Energy Series: Africa LNG Special Report 2021  adds that emerging LNG markets in East Africa are becoming increasingly competitive on the global LNG stage, demonstrating its potential as a viable energy source for the region.

Mozambique, which is Africa’s third-largest in terms of gas reserves has recognized the opportunities regarding electrification, regional trade, economic growth and industrialization that LNG presents.

The country is developing three LNG plants that have a combined capacity to export an estimated 30 million tonnes of LNG per year. In addition, West Africa is positioning itself as an LNG competitor, with new project developments enabling the expansion of and investment into, the regional LNG market.

The report notes that Equatorial Guinea is focusing on the development of a Gas Mega Hub which will monetize neighbouring gas reserves by establishing itself as a gas-processing centre to spur regional LNG trade and expand the market.

To prioritize intra-African trade through the provision of natural gas to the wider region, Equatorial Guinea has created the LNG2Africa initiative. The initiative has a mission to build relationships and infrastructure that facilitate an intra-African LNG industry thereby providing power and industrial development.

LNG2Africa is seeking to exploit the major gas discoveries all over Africa with cheaper LNG processing, transport and regasification technology which makes it possible to sell LNG to African consumers at a more attractive price than has been.

The emerging CNG markets in East Africa include Tanzania which is positioning itself to become a major player in the global market. The nation is in the process of transforming vehicle fuelling stations into CNG retail stations, encouraging regional use of the resource and reducing existing reliance on traditional fuels.

The Tanzania Petroleum Development Corporation (TPDC) is planning two large-scale stations to be developed in the commercial capital of Dar es Salaam with the intention of supplying CNG to retail stations located far from the pipeline infrastructure. Tanzania is enabling provisions of CNG to inaccessible locations which is helping spur economic growth on both a national and regional basis.

Usage of CNG in heavy-duty transportation vehicles is leading to its gaining significant attraction offering both affordability and eco-friendliness. With the increased environmental concerns over high carbon emissions, many countries are opting for CNG in power production.

Nigeria, Africa’s largest economy, is utilizing CNG for transportation purposes across the nation. The nation is supplying retailing stations operated by the Nigerian National Petroleum Corporation to encourage a shift towards CNG usage and reduce oil consumption. The report notes that Nigeria is also pushing for a transition from traditional fuels to CNG for the country’s power generation and transportation.

In South Africa, the CNG market is gradually expanding with new projects being implemented across the larger Southern Africa region. The purpose of this expansion is to provide a transportation fuel alternative to oil.

Renergen which is an emerging natural gas and helium producer has announced completing a second CNG filling station in Johannesburg where CNG will be utilized for transportation requirements throughout the nation.

With the potential LNG offers the African continent, LNG2Africa is working with African nations to sign government-to-government LNG sale and purchase agreements and terminal use agreements as a basis for LNG exchange.

Through LNG2Africa, beneficiaries across the LNG value chain will exchange knowledge and data and will commission technical studies for the construction of regasification and LNG storage terminals and transportation infrastructure, either by pipeline or LNG carrier.

To make the initiative a success, energy trading companies, participating states and other independent African companies have been looped in to support the initiative by providing financing and shipping capabilities.

The LNG2Africa initiative also favours the development of private African companies in the gas sector through joint ventures with multinational companies to establish technology transfer and capital financing.

With African natural gas consumption expected to grow at an average of 3.3 per cent annually – to reach approximately 195 billion cubic meters (bcm) in 2025 and up to 380 bcm in 2050 – there are new and emerging gas markets that need to be served and thus are developing several large- and small-scale projects across the continent delineating key success factors of project financing and execution.

The International Energy Agency (IEA) notes that sub-Saharan Africa is among the fastest-growing regions globally and is set to become the most populous region by 2023. This translates to high demand for energy on the continent. This demand dictates the need for the development of and investment in high-yield power projects.

Based on known reserves sub-Saharan Africa has the potential for approximately 400GW of gas-generated power according to the Power Africa Roadmap 2030. The region which has lagged behind on many fronts can utilize its gas reserves to fuel socio-economic growth along with a transition to cleaner energy sources and regional industrial development.

With demand for power increasing throughout Africa, the significant deficits in installed generation capacity mean that the continent can tap into LNG whose costs have fallen in recent years allowing it to better compete with other fuels in many markets.

The report notes that in addition to power generation, LNG represents a key facilitator in the energy transition, as it is able to reduce continent-wide reliance on coal-fired projects by providing a cleaner, cheaper and more accessible source.

Accordingly, the decarbonisation component of LNG represents key drivers of LNG-to-power projects across the continent.

Despite the promising potential of LNG-to-power in Africa, there, however, remain several challenges that continue hindering the sector’s development. Bringing LNG projects to life remains a complex undertaking since it requires capital-intensive infrastructure. To successfully tap into the LNG potential, African governments have to become innovative to ensure that the continent gets more reliable power from the natural resources scattered all over Africa.

Read: Exim Bank US provides $4.7b to Mozambique LNG