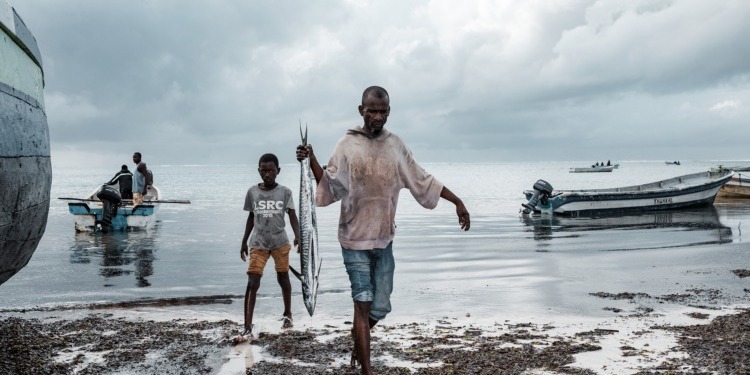 Fishing in Africa: The Exchange

by Padili Mikomangwa
in Business, Industry and Trade, Premium
0
Share on FacebookShare on LinkedIn

What if Africa could farm its oceans and reap benefits from it? Yes, research findings from African Natural Resources Centre (ANRC) in collaboration with African Development Bank (AfDB), ‘Prospects for developing green aquaculture in Africa 2021’ report brings a whole new depth to aquaculture in Africa.

The continent is growing fast, and it could grow more sustainably if it utilizes its most crucial resource, natural wealth. The report highlighted that the aquaculture sector is slowly growing and it shows a strong potential for expansion.

The world aquaculture landscape is showing promise. The Food and Agriculture Organisation (FAO) 2020 report showed that farmed seafood globally produced 82.1 million tonnes of aquatic animals in 2018—which is equivalent to 96.4 tonnes of fisheries catch.

“Global aquaculture has been growing at an average annual rate of 5 per cent over the past 20 years and this growth is expected to continue in the coming decades.  In several Asian countries and Egypt, aquaculture has overtaken traditional fishing to be the main production source of aquatic organisms,” the report noted.

Contrary to the top performers of the world, Africa is not catching up. The region occupies at least 2.3 million tonnes (2 per cent) of the world’s production.   The AfDB report stressed that African production is dominated by fish farming (2.2 million tonnes or 4 per cent of world production) and Africa accounts for less than 1 per cent in all other forms of aquaculture.

According to the African Union Development Agency, fish resource exploitation has been crucial to Africa; together with aquaculture they contribute about 1.4 per cent of African GDP.

The report highlighted that development prospects are not very optimistic with a production of four million tonnes predicted by 2050 if African aquaculture remains dominated by tilapia farming.  However, the research finding argued that rapid diversification into other categories could transform Africa’s prospects and enable it to produce up to 15 million tonnes by 2050, “which would make a significant contribution to food security and the development of regional and international exports”.

The number of farmed organisms is rising with more than 620 animal species in 2018—which is a 30 per cent increase since 2006.

Despite these changes, the research findings argue that most of this farming still involves freshwater fish, which represent 62 per cent of the global aquaculture production in 2018 compared to 38 per cent for marine organisms. The potential is undoubtedly stronger for marine farming development.

With these findings, it is also important to recognize the present significant challenges associated with the diversification of this landscape, especially in technical, environmental and economic terms.

“This is particularly the case for crustaceans (shrimps) and carnivorous fish (sea bream, sea bass, meagre) which require constant care and expertise to cope with various pathogens and a regular and high-quality external feed,” the report noted.

More importantly, sustainable marine exploitation is key to the African fisheries industry as well as aquaculture. Hence, according to the Organization for Economic Cooperation and Development (OECD), oceans contribute $1.5 trillion annually in value-added to the overall economy.  The report brought out several strategic alternatives that are sustainable in diversifying the sector and reap benefits at the same time.

By exploiting algae—which are developed only in Tanzania, but with vital potential for the organisms to be exploited in other places along the Indian Ocean, the Atlantic coast and the Mediterranean Sea countries in these areas ought to invest in this section of aquaculture, which brings out multiple benefits including absorbing CO2 emissions and producing biofuels.

“At least two groups of marine fish species can be farmed without being fed: mullet, whose production is traditional in Egypt and reached 210,000 tonnes in 2018, and milkfish (1.3 million tonnes in 2018 globally) where production is still in its infancy and so far limited to Tanzania and Kenya,” the report argued.

If African economies can choose and focus on beneficial and market demanded marine resources, the industry will develop and improve the livelihoods of scores of people.

The report showed that a multitude of invertebrate species are demanded by the market, especially in Asia, which means there are potential markets to kick-start the aquaculture trade on a large scale.

“African invertebrate farming today is only concerned with sea cucumbers, or holothurians, but there are other species with potential including sea urchins, sponges and some corals. In some cases, the farming communities do not traditionally consume these animals themselves, but they can become an important source of export income. On this note, particular attention will be paid to holothurian farming, which is already well-developed in some countries, notably in Madagascar and Tanzania and whose potential is currently one of the most promising,” the report showed.

In terms of numbers, there is promise. For instance, essential marine products such as holothurians are mainly demanded in China, Taiwan, Singapore and Hong Kong, sold per kilogram from $30 to more than $3,000 (AfDB).

The most inspiring scenario is that the world trade has expanded significantly and the numbers seem to favour Africa, where back in the 1980s the yield was less than 2,000 tonnes but during the last decade it has increased to more than 20,000 tonnes, and is worth more than $600 million.

Sustainable exploitation of the marine ecosystem is an important factor for the diversification of fisheries and aquaculture sectors in Africa. It is not only holothurians that are in demand in Asian markets, but there is also an emerging sector for sea cucumber farming in North and East Africa—which ultimately will “provide a predictable income-generating activity for fragile fisheries-dependent communities and contribute to the restoration of ecosystems,” the report stressed.

Also, the report highlighted the creation of a legal and regulatory conditions document to enable an “incentivized environment for public-private partnerships to engage in long-term research and development programs on sea cucumber aquaculture. This could include objectives to diversify the types of production, increase the added value of the products and provide technical services to the communities and SMEs involved. Support for technical innovations should be provided, including the protection of intellectual property.”

Africa has the wherewithal to master the exploitation of its blue economy potential. As the region begins breathing life into the African Continental Free Trade Area agreement, the number of benefits that can be reaped from the aquaculture industry are vast and must not be passed up.